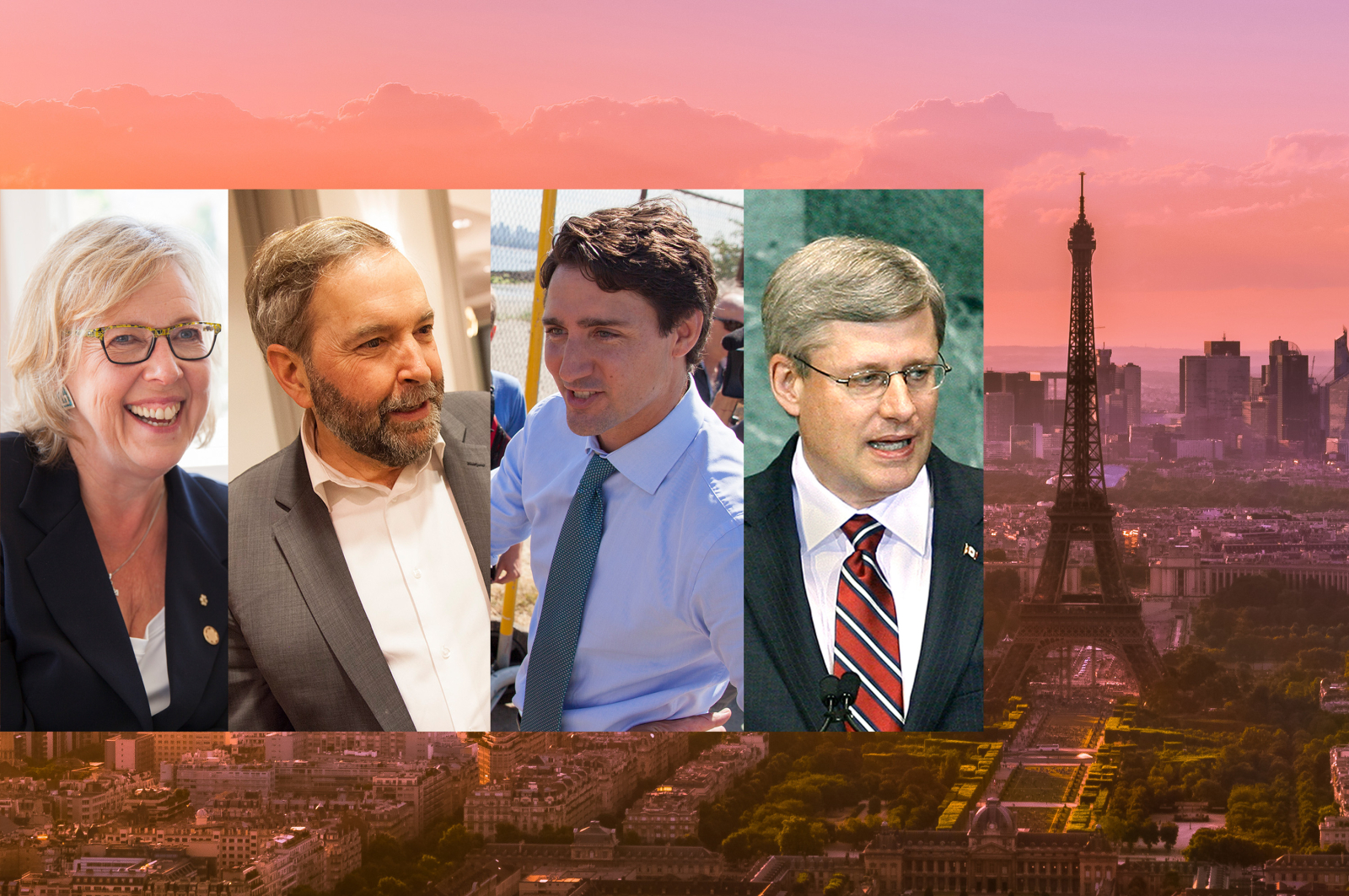 Canada’s national election on Oct.19 will give the presumptive next prime minister just 42 days to prepare for a crucial climate summit in Paris. The summit is being billed as the most important UN climate meeting in a generation, an annual convention where Canada has received a black eye for years for being a climate action laggard.

“I have every intention —as the prime minister —of going to Paris and sitting down [with other world leaders]. We’ve got incredible [diplomatic] teams in Ottawa, there’s just being held back,” said Mulcair in Vancouver on Sunday.

"It’s time we get clear targets and we started respecting them, and put in place a plan —something the Liberals never had, and something Mr. Harper has never believed in,” he added.

The “COP21” United Nations Framework Convention on Climate Change, Nov.30 to Dec. 11, aims to seal the first global climate deal that would include most rich and poor countries, and to legally bind them to emissions cuts to hold dangerous planetary warming to just two degrees this century.

Prime Minister Stephen Harper has said his government has been a "constructive negotiator” in these UN climate talks. But that’s not how influential climate observers see it.

Former UN Secretary General Kofi Annan led a report in June that concluded with spectacular frankness that Canada, together with Australia, "appear to have withdrawn entirely from constructive international engagement on climate.”

And Green Party Leader Elizabeth May, who attends UN climate talks for Canada—and even negotiated on behalf of Afghanistan —says the Harper government has “lost all respect in the room” at COP meetings. Canada has deliberately “obstructed and delayed” global climate deals to protect Alberta’s oil sands —the nation’s largest source of rising greenhouse gases, May said.

Canada's nine-year ruling Conservatives, now slipping to 31 per cent in national polls, did not respond to repeated requests this week to respond to these criticisms, or to say whether Harper will attend the Paris talks, if re-elected.

Environment Canada confirmed Harper has not attended eight annual COP meetings since first becoming prime minister in 2006. He attended only one —the 2009 Copenhagen summit that failed to produce a post-Kyoto deal.

Expectations are high that many heads of state will attend the 2015 Paris talks, as the U.S. and China have signalled their commitment to get a global deal. University of British Columbia climate change policy expert Kathryn Harrison says Obama is moving aggressively on climate change in his last year in the White House.

"Last week, the [U.S.] President finalized emissions regulations in the [coal-powered] electricity sector and that accounts for a huge chunk of emissions reductions,” said Harrison.

"That’s important because….it raises the bar for other countries like Australia, Japan, New Zealand and Canada, who’ve hidden the shadow of U.S. inaction,” she added.

Third-place-polling Liberal leader Justin Trudeau has committed to attending the talks with provincial premiers. The Liberal's carbon pricing plan to cut Canada’s emissions relies heavily on letting provinces, such as oil-producing Alberta and Saskatchewan, decide how climate change will be tackled.

Crucially, Trudeau's spokesperson said Liberals wouldn’t have a new national emissions target in hand at the Paris talks, leading some to wonder how’d he negotiate Canada’s position. The Liberal policy book calls for the Canadian climate target to be worked out 90 days after the Paris summit.

Likewise, Thomas Mulcair skirted a question Sunday about whether the NDP would have a new Canadian target for the summit. His plan calls for a national cap and trade program to set a Canadawide price on carbon.

Elizabeth May admitted the time frame from the Oct.19 election to the Paris summit is short —but with speed and urgency, a realistic climate target and plan could be set.

"We have almost no time. But we have enough time. So, that’s what I live for,” May said, in an editorial meeting Monday with the National Observer.

NDP Toronto candidate, Linda McQuaid ignited a firestorm when she suggested on CBC TV last week that "a lot of the oilsands' oil may have to stay in the ground” — a position held by a Nature-published climate science study that said 99 per cent of oil sands would need to stay unearthed to avoid planetary climate chaos.

Mulcair, who is not opposed to oil sands development, quickly clarified:

"Our position is that we can of course develop our natural resources as long as it’s done sustainably... Our environmental assessments of these projects will include an analysis of whether or not it allows us to meet internationally agreed targets for Canada for greenhouse gas reductions —that’s the party’s principle,” he said Sunday.

Harper's Conservatives have committed Canada to a 2020 target of 17 per cent below 2005 levels and recently declared a new 2030 target in line with the U.S.'s. But Environment Canada's most recent GHG projections show Canada will not meet its 2020 target —something Harper himself hinted at in last week’s Maclean’s TV leaders' debate. Harper added he is still hopeful a 2030 target will be reached.

Canada signed the Kyoto Protocol to reduce emissions, but the Harper government pulled out in 2011 and the US never ratified. China, as a developing country, was also not obliged to make emission cuts, despite now being the world’s largest polluter.

NASA has said 2014 was the hottest modern global temperature year and Arctic winter ice sheets were in the worst condition ever seen on satellite record too.

Canada is routinely handed "fossil awards" by environment critics at UN COP climate conventions. In 2013, Canada was given an award for "Lifetime Unachievement."