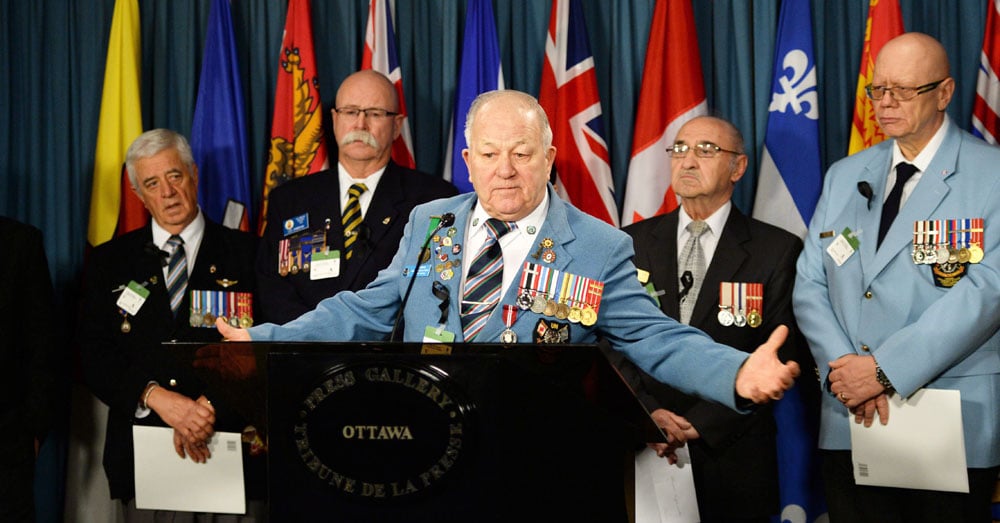 Veteran Ron Clarke has been fighting on the homefront on behalf of returning military suffering from PTSD. CP file photo
Previous story
Next story

“I was deployed with a Canadian contingent. We were there to monitor the so-called ceasefire. While there, we lost one officer who was shot down and we had two officers taken prisoner and held for over a month,” said Clarke.

Today Clarke, who has Post Traumatic Stress Disorder (PTSD) after serving more than 35 years in the army, is fighting another battle – to throw Stephen Harper out of office come Oct. 19. Clarke is angered by cuts to vital services that have left some former service people struggling.

The Anyone But Conservative (ABC) Canadian Veterans Campaign 2015 will be targeting swing ridings as well as areas with military bases in Canada's 2015 federal election. The campaign will be launching an Indiegogo fundraiser to garner donations. Already, the group is drawing support on Facebook through a page that now has roughly 10,000 ‘likes.'

“What’s happening on the Facebook campaign is out of this world support,” said Clarke, who served as ABC’s former chair.

The ABC campaign is protesting against drastic federal budget cuts that resulted in a total of nine Veterans’ Affairs offices across Canada closing down last year, which provided frontline services to ex-soldiers like Clarke, who in addition to PTSD suffered a back injury while handling mail and further injuries to his hands he sustained as an army boxer.

However the cuts have backfired. The federal government had to hire 100 caseworkers to oversee roughly 900 veterans’ files, after a similar number of people were let go when the offices were shut down under former Veterans Affairs Minister Julian Fantino, according to disabled veteran Tom Beaver.

“It’s pretty much their own fault,” said Beaver, who has run ABC since last year.

A second ABC demand is the restoration of monthly payments to injured veterans instead of the ‘lump sum’ payments currently handed out by the federal government, a system that was first introduced a decade ago.

Critics have derided the lump sum payments as being less generous than compensation awarded to civilians who suffer workplace accidents, but current Veterans Affairs Minister Erin O’Toole proposed a new critical injury payment of up to $70,000 for service personnel who suffer critical injury, a benefit that is meant to complement the existing lump sum system.

Nonetheless, lump sum payments are still under fire from Beaver and others for offering less compensation in total to veterans than the old monthly installments they used to receive.

According to Beaver, who qualifies for monthly disability payments under the old system, young soldiers who had food and board looked after by the military often had no idea what to do with such huge one-time payments after injury forced them out.

As a result, many young veterans burn through the money in just a few months, as they struggle to deal with the trauma of suddenly leaving the military.

“It’s like they just won the lottery,” said Beaver.

In addition, ABC is pushing for military reservists to be compensated for injuries at the same rate as regular personnel and for service people wounded in the line of duty while serving in Canada to receive the same compensation as those posted overseas.

He was referring to a class-action lawsuit launched in 2012 by injured Afghanistan veterans angered by the lump sum payment system, who argued that a social contract existed between military personnel and the federal government, a claim contested by Ottawa.

“If this was a Liberal, NDP, or Green government in power now we’d be doing the exact same thing if they were mistreating us,” said Beaver.

Both Clarke and Beaver criticized other Conservative legislation that they say undermines the Canadian freedoms they as soldiers swore to defend. They refer to Bill C-51 which increases government surveillance powers, allows suspicious individuals to be preventatively arrested, and adds to no-fly lists. They point to Bill C-24, which gives government ministers the power to strip dual-citizens of their Canadian citizenship without any judicial oversight.

“I feel strongly that Mr. Harper has become a dictator,” said Clarke.

While Beaver has not yet looked over C-51 in full, he too slammed the new anti-terror legislation as an attack on those freedoms herisked his life defending, saying that the government had no business monitoring his emails or phone calls.

“I don’t want to worry about Big Brother looking over my shoulder,” said Beaver.

Clarke also blasted the Harper government’s recently-passed Fair Elections Act, which requires voters to present valid ID or have someone swear an oath on their behalf among other changes, but has been slammed by critics for making it more difficult for groups such as students who may have trouble proving their current address even if they can prove who they are.

“This is not a Fair Election Act. This was passed to help Harper eliminate one million voters who he thinks would vote against him,” said Clarke.