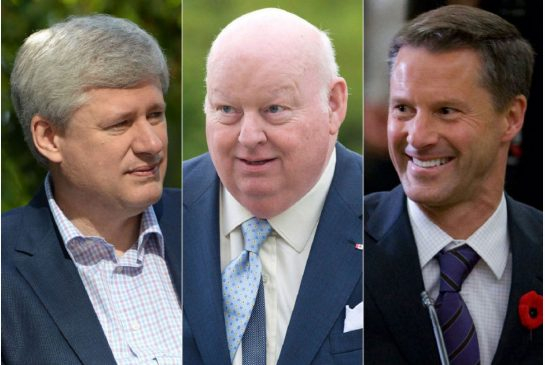 Finally, the Duffy trial has lived up to the media hype surrounding it.

The scorned senator’s lawyer, Donald Bayne, dropped bombs on the Crown’s star witness Nigel Wright for the second day in a row, revealing attempt upon attempt from within the PMO to “staunch the bleeding” (or as Wright wrote it in a February 2013 email, “Chinese water torture”) of Duffy’s increasingly publicized spending scandal.

“You’re manipulating him, your being two-faced with him, you’re not being honest with him,” the attorney accused, poring over emails between Wright and a very a concerned Duffy in 2013.

“(Duffy) was forced to do this. He didn’t want to do it, there’s no element of true free will here.”

READ: Emails filed by the defence on Thursday

Wright’s testimony has dominated Ottawa news coverage since it began on Wednesday, and the legal gymnastics did not disappoint in the courtroom today. Crown prosecutor Jason Neubauer objected to Bayne’s cross-examination on several occasions in protection of his wide-eyed witness, Nigel Wright.

Wright, who passed as a smooth operator during Neubauer’s prosecution on Wednesday, has appeared to be struggling under the shrewd interrogation of Duffy’s lawyer. But according to discussion with public observers, he still holds the most credibility of the trial’s major characters: Duffy, Wright, and by extension, Prime Minister Harper himself.

Who do you believe most?

“Despite those emails, Wright is still definitely the better (of the three),” said an observer to the proceedings outside the Ottawa Courthouse. “I’m quite skeptical of Prime Minister Harper’s position in this.”

Wright has already testified that Harper was out of the loop on plans to repay Duffy using the Conservative Fund, and eventually, his own pocket money, despite deep involvement from Harper’s office in encouraging Duffy’s repayment, stifling media coverage, and trying to duck out of an independent Senate expense audit.

Whether that testimony passes muster with the judge and court of public opinion is another matter.

“Obviously, Bayne has an interest to paint the story a certain way, and I think that’s what he’s doing,” said another observer. “But if you look at all three — Duffy hasn’t spoken, PM Harper isn’t under oath, and Wright is under oath, so I think the only person you can believe if Wright.”

If credibility is a currency, Duffy likely spent all his coin when the scandal broke in February 2013 and Harper — long accused of gagging anyone who disagrees with him — has very little pocket change left.

Wright however, had a relatively clean history before the commotion, and appears to retain his bag of green. At least, he retains it for now — with every new email presented in court, Duffy’s lawyer carries off with that cash.

Even if Bayne empties Wright’s purse, it doesn’t really matter — Wright has already lost his job as chief of staff to the prime minister. Even if Duffy is acquitted, the affair will still prove a tough stain to remove on his professional reputation.

Wright’s not on trial, but he loses anyway.

Duffy, accused of 31 charges relating to breach of trust, bribery and fraud, has already misspent taxpayer dollars in the public eye, and could face national outrage if permitted to carry on as senator. Canadians won’t easily forgive and forget the Conservative politician’s alleged mistakes, not in the context of Harper’s poor democratic record.

So even if he wins, Duffy loses too.

Though Harper has deniability, the expense scandal occurred right under his nose, instigated by a man he appointed to the Senate and complicated by his own senior staff members. The whole affair reeks of manipulation, deceit, and inappropriate concentration of power within the PMO.

Harper — supposedly hands off on the entire issue — still loses.

Who are the real winners here?

The opposition parties: The Liberals, the NDP, the Greens. The timing of the Mike Duffy trial is exceptional, stretching through the dog days of summer, a federal election campaign, and possibly through to 2016. Bayne — Duffy’s lawyer — has real momentum in this third phase and it’s unclear how lofty his goals are.

Will he stop at asserting Duff’s innocence, or he will he try to bring Wright, Harper and everyone else down in the process?

In terms of Canada's 2015 federal election, it doesn't really matter if Duffy is convicted. The fact that he wound up in court in the first place will give Mulcair, May and Trudeau all the ammunition they need.