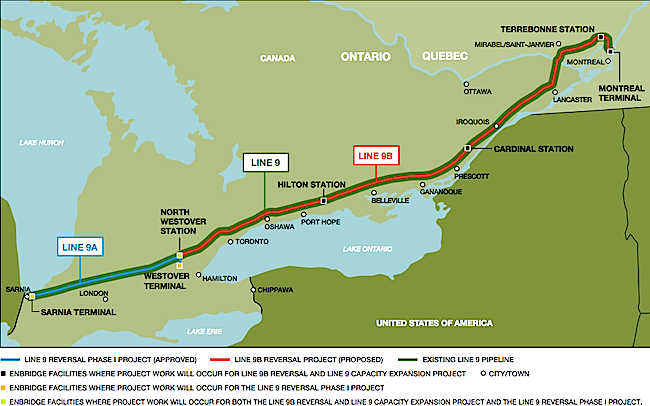 A controversial plan to ship oil sands bitumen across southern Ontario through a leak-prone pipeline took a new twist when the project changed ownership.

Ownership of the Enbridge Line 9 route was transferred from its parent company to the Enbridge Income Fund, at the same time when 60 kilometres of this route is undergoing hydrostatic testing to ensure its structural integrity.

“At a time when safety should be first and foremost on the minds of everyone involved with the Line 9 project, I find this ownership transfer timing is highly questionable,” said anti-Line 9 activist Louisette Lanteigne, a Waterloo resident who lives near the pipeline’s route.

Enbridge is proposing to reactivate the 38-year-old Line 9 pipeline, currently inactive since last year, to ship oil sands bitumen east from the U.S. via Sarnia to Quebec. Prior to being shut down, Line 9 carried lighter Middle East crude west from the Montreal Terminal, via North Westover Station, to either the Sarnia or Westover Terminals.

The pipeline has had nearly one spill a year since it was first built through Toronto and its environs 38 years ago, but municipalities often had no idea that any leakage had occurred, according to a Feb. 21, 2014, CTV report. The line had suffered 35 spills up to that date, five times more than those revealed to the regulators.

Enbridge spokesperson Graham White told CTV at that time that all spills on Line 9 were reported, but leakages inside oil facilities could not be considered pipeline incidents.

Nonetheless, Enbridge has also suffered ruptures on other pipelines, such as the 2010 Kalamazoo incident.

It is this track record that worries Lanteigne and other Line 9 activists, who say that hydrostatic testing must be carried out along the whole route and any mergers deferred until after such testing occurs, to ensure that the proper insurance and emergency protocols were in place to protect the public.

Hydrostatic testing is carried out by pumping water at high pressure through a pipeline to test its structural integrity and scope out any weak points at risk of rupture. Lanteigne and her fellow activists are calling on the National Energy Board (NEB) to order testing along the whole length of Line 9 instead of segments totalling 60 or so kilometres near Montreal and Kingston currently underway.

But White said that the ownership transfer and financial restructuring had nothing to do with the hydro-testing of Line 9 or any other pipeline, saying that it was conceived “well before” any NEB requirement for hydrostatic testing, in an email to Lanteigne dated Aug. 18. The National Observer also attempted to ask White about this issue.

Lanteigne said that any new company operating the line had to not only assume all the liability and risks, but also notify First Nations, municipalities, and land owners regarding the pipeline sale, before hydrostatic testing could commence in earnest.

But Lanteigne, who has previously attended public hearings regarding Enbridge’s proposal to use Line 9 for transporting bitumen, maintained that handing the route to a new owner could potentially compromise safety, despite White’s reassurances to the contrary.

“The more companies they add to the mix the more costly liability risks become,” said Lanteigne. “It becomes very costly very quickly to sue, when multiple companies are involved with the same pipe.”

John Quarterly, chair of the Chessmen Media Group, said that corporations often set up several layers of shell companies that force plaintiffs to sue through all the different levels, resulting in expensive court cases that can drag on for years. He alleged that such tactics were used by big companies to divest themselves of any responsibility in the event of disasters like a major oil spill.

“I do not know how many of you know how the corporations protect themselves from being sued," said Quarterly in an email to Lanteigne. "They keep setting up subsidiaries that have shares in the company which they have split off from.”

However White told Lanteigne that stakeholders and municipalities would not have to manage interactions with more than one entity, as Enbridge’s liability obligation would not change and asset transfers will be from one entity to another, not to a variety of holdings.

“There is, in fact, more consolidation of assets now than before,” said White in his message to Lanteigne.

“We have been conducting internal financial restructuring of assets in the past year or so that will have no impact on our liability, levels of insurance, operations or continuing commitment to the safety and integrity of our operations. They are primarily for greater and easier access to, and ability to raise capital, for future major projects and increase dividends to shareholders. We have transferred many of the Liquids assets, including Line 9, to the Enbridge Income Fund,” said White in an email to Lanteigne on Aug. 17.

“There are no plans for merging with any external firms, this is an internal process to Enbridge-owned and operated companies.”

Lanteigne also contacted the National Energy Board (NEB) to request documents that permitted Enbridge to change ownership of Enbridge Pipeline Inc.'s assets to Enbridge Investment Holdings Ltd, saying that “It is my understanding that is a normal process done to assure compliance with section 74 of the NEB Act.”

“Enbridge is not required to seek NEB authorization under section 74 of the NEB Act for the change in corporate structure noted below, and has not done so. Hence, there is no documentation to provide in that regard,” said the NEB’s Andrea Caza in an emailed reply to Lanteigne on Aug. 18.

But Lanteigne maintained that if the Enbridge Pipeline Inc. and Enbridge Income Fund were indeed two separate companies, then section 74 of the NEB Act would have been violated.

The National Observer tried contacting Enbridge’s Graham White several times for more information, but did not receive a response at time of writing.