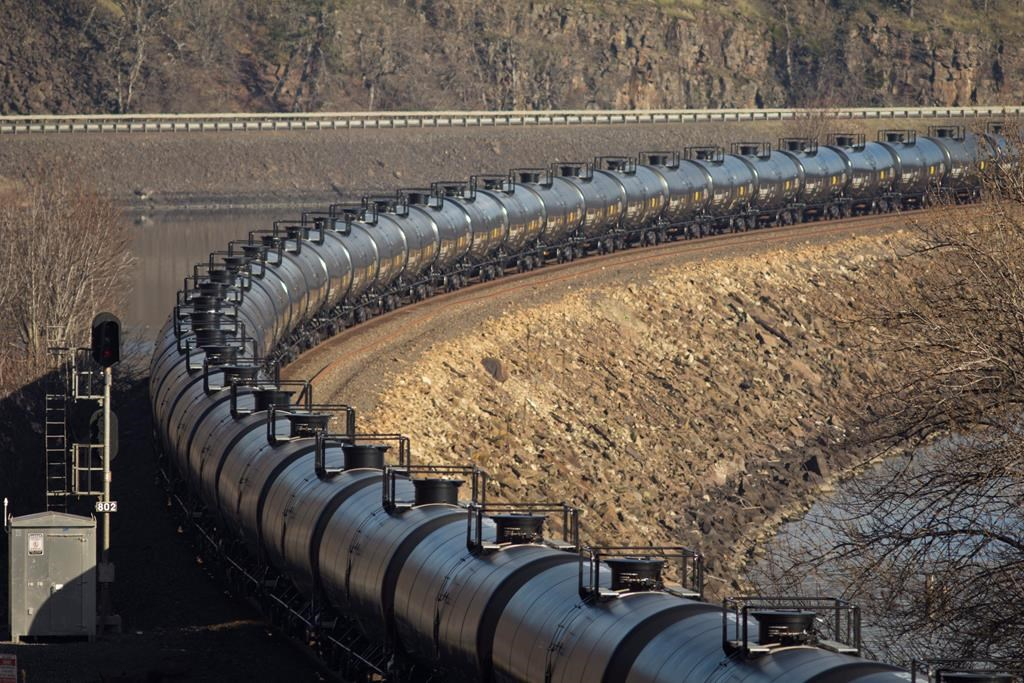 CALGARY — To crude producers hankering for a route to market while pipeline proposals stall, a bevy of crude−by−rail projects planned on the U.S. West Coast may look enticing.

But efforts to connect trainloads of crude to refineries and marine terminals in Washington, Oregon and California aren’t having an easy time of it either.

Big environmental organizations and small community groups have been teaming up to fight rail projects in various stages of development in the region. Among the concerns is the prospect of more Alberta bitumen, derided as "dirty" in some quarters, coming to the area by rail.

"We’re as much of a green enclave as you’re going to get in North America," said Matt Krogh, a ForestEthics campaigner based in Washington state.

"There’s some real cognitive dissonance around allowing the expansion of a dirty and polluting industry in your backyard that makes no long−term economic sense."

Some of the concerns centre on local safety. The Lac−Megantic disaster two years ago, in which a crude−laden train exploded and killed 47 people, is still fresh in many minds.

But the larger implications of enabling more fossil fuel development and what that means for climate change is also playing a role in the debate.

The broad issue of shipping resources from the U.S. West Coast — whether that be coal, oil or liquefied natural gas — raises an "identity question," said Eric de Place, with the Seattle−based think−tank Sightline Institute.

"There’s a lot of anxiety about that," he said.

A focal point of campaigns has been a $210−million project pitched by Tesoro Refining and Marketing LLC and Savage Energy for Vancouver, Wash.

The Tesoro−Savage project, dubbed Vancouver Energy, is the largest on the table, with a planned capacity of up to 360,000 barrels a day. That alone is more than 40 per cent of the proposed Keystone XL pipeline, which has been waiting for U.S. regulatory approval for nearly seven years.

The idea is to bring in North American crude by train and then send it by ship to refineries along the West Coast, which have been relying on overseas imports to meet half their needs as production in Alaska and California declines. Vancouver Energy says the project would reduce the West Coat’s reliance on foreign crude by 30 per cent.

Tesoro spokeswoman Jennifer Minx said the terminal is set up to handle crude mostly from the Bakken formation, centred on North Dakota and stretching into parts of Saskatchewan, rather than heavy crude, like that from the oilsands.

She cited a poll by DHM Research that suggests 69 per cent of Clark County respondents support the project because of its economic benefits and contribution to energy security.

"The Vancouver Energy terminal will be a modern, purpose−built facility with strict safety and environmental protections in its design and operating procedures. We actively work with our partners to make sure the entire supply chain is operating safely," Minx said.

"If you asked me a year ago, I might have had a different answer but there’s been unprecedented opposition to it," he said. "It’s not just conservation groups. It’s pretty diverse and broad scale concerns about these projects."

As for how much oilsands crude may make it to the U.S. West Coast by rail, a lot will have to do with weather pipelines to the British Columbia coast come to fruition, said Sightline’s de Place. If not, rail to the Pacific may become more popular.

Kinder Morgan’s plan to nearly triple the capacity of its Trans Mountain pipeline from Edmonton to the Vancouver area is being weighed by the National Energy Board.

Enbridge Inc.’s Northern Gateway proposal to Kitimat, B.C., has regulatory approval, but the company has not officially decided whether to build it.

Then there’s the question of whether the pricey crude−by−rail option is worth it, with crude prices are at their lowest levels since 2009, de Place said.

"I guess my message to the Alberta producers would be: good luck. You’re going to need it."