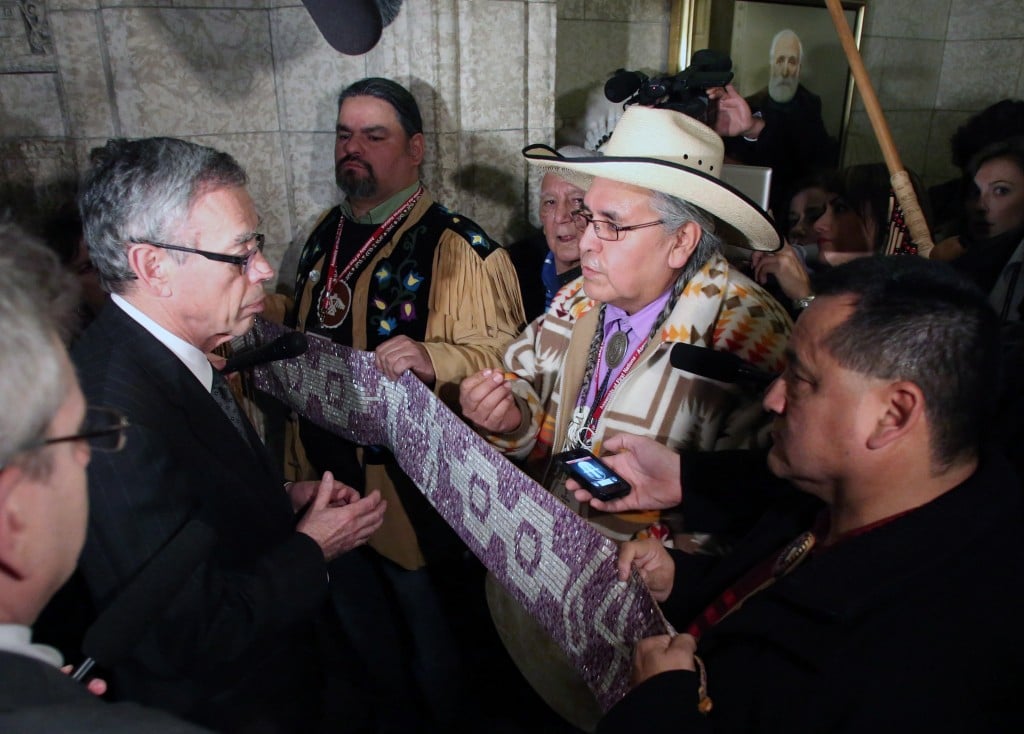 Natural Resources Minister Joe Oliver(right) debates with Chief Wallace Fox of Onion Lake First Nation before they try to push their way into the House of Commons and are restrained by House of Commons guards on Parliament Hill in Ottawa, Tuesday. CP/Fred
Previous story

The Onion Lake Cree Nation has became the first Indigenous group in Canada to file for emergency action from the United Nations concerning the controversial First Nations Financial Transparency Act.

Chief Okimaw Wallace Fox sent a plea to the UN Committee on Elimination of Racial Discrimination (CERD) on Tuesday asking for international supervision as his community engages the Government of Canada on what he calls a “continued violation of treaty rights.”

“There was never any discussion between our Nations and the Conservative Government,” he said of the bill in his letter to the president of CERD. “The Minister of Indian Affairs is imposing this legislation on First Nations even though its constitutionality is in question before the courts.”

The First Nations Financial Transparency Act (FNFTA) came into effect in 2014, requiring First Nations to submit their audited financial statements for the previous fiscal year to the government, including salaries and expenses of chiefs and councillors.

As of this morning, the CBC reported that 197 out of the 581 applicable First Nations (roughly 33 per cent) had not yet complied with the rules, despite a Monday statement from Aboriginal Affairs Minister Bernard Valcourt threatening to withhold future funding.

“Beginning September 1st, 2015, bands that have yet to comply with the law will see funding for non-essential services withheld,” he said. “Further actions may include seeking court orders to compel compliance.”

The Onion Lake Cree Nation, which straddles both Saskatchewan and Alberta and counts over 5,500 members, rejected his comments that this funding could be kept by the government in the first place.

“In the Court proceedings, it was made clear the monies flowing to First Nations are ‘Indian monies’ allocated by Treasury Board,” he told the UN in his letter. “In an attempt to force compliance, the government has halted our non-essential funds and withheld housing approval for our needy families.”

He also said Indigenous people are the only people in Canada who have “no right of privacy,” and that First Nations have always complied with requirements of being transparent and accountable to its own citizens.

“We are appealing to CERD to communicate concern about the situation in Canada in relation to this legislation and the heavy handed approach being taken by the state against Indigenous Peoples who have constitutional and international treaty rights,” he said.

The federal government has already taken the Onion Lake Cree Nation to court to force compliance with the FNFTA, and after two days of hearings, a federal court reserved his decision.