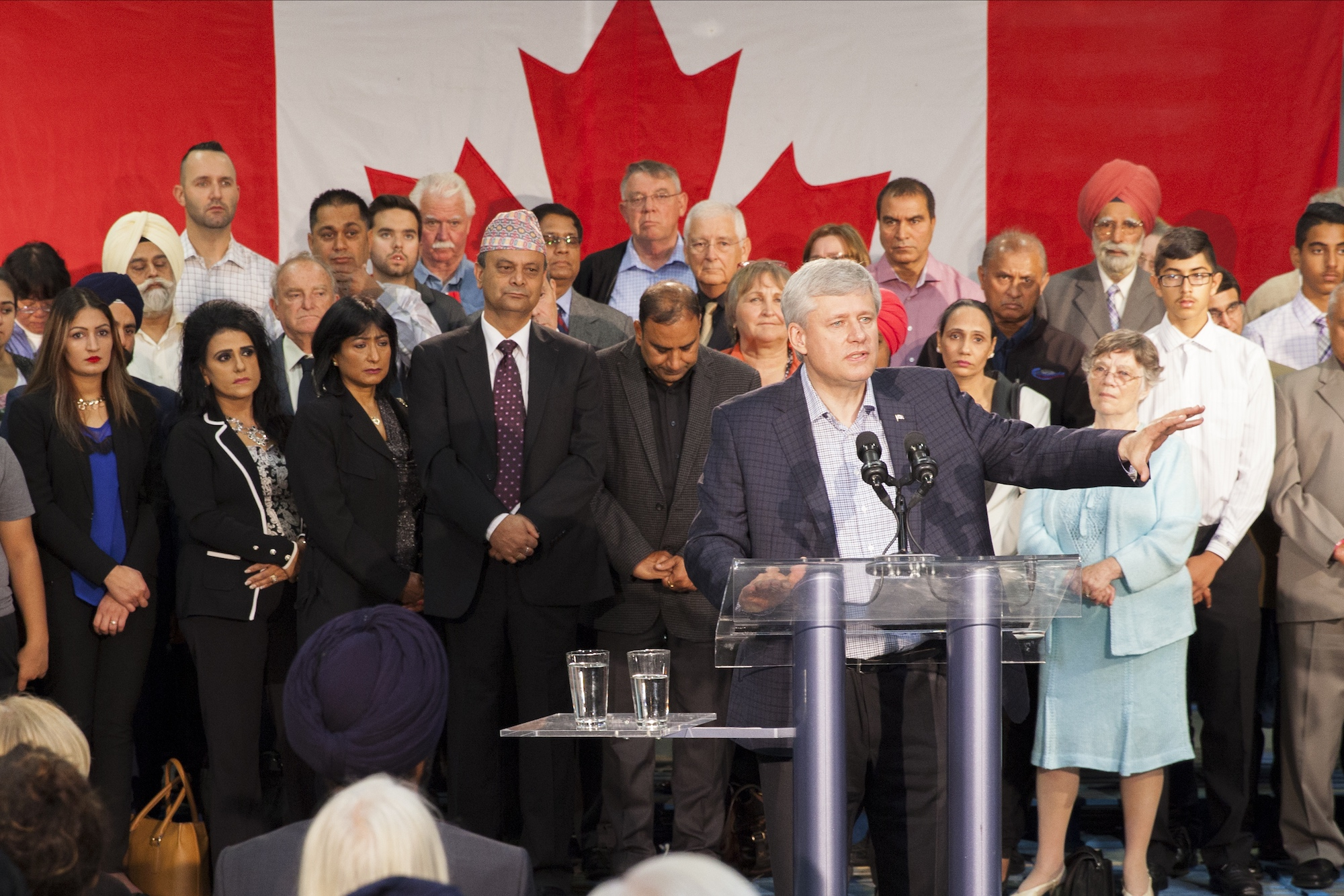 Conservative leader Stephen Harper speaks about the Syrian refugee crisis and the death of a 3-year-old toddler. Photo taken in Surrey, B.C. on Thursday by Mychaylo Prystupa, National Observer
Previous story
Next story

Canadian federal leaders pivoted the election Thursday entirely to the death of a three-year-old Syrian toddler, whose lifeless face-down-into-a- beach body was shown in news photos worldwide Wednesday. The incident has sparked international alarm for the Middle East humanitarian crisis, and prompted critics to say Canada isn't taking in enough refugees from the conflict.

Conservative leader Stephen Harper had his light-rail rapid transit announcement in Surrey, B.C. canceled to comment exclusively on the drowning incident that also took the boy’s brother and mother. The family was attempting to flee Syria to Greece when their boat capsized. Only the father Abdullah Kurdi survived.

Media reports suggested the boy’s aunt, Tima Kurdi, in Coquitlam, B.C. had been desperately trying family members into Canada before the crisis ultimately prompted the fateful voyage that killed a total of 12.

Key among questions aimed at Harper on Thursday was why did the Kurdi family of war-afflicted refugees have their refugee claim for Canada rejected in June? Harper would not comment on the specifics and said his immigration minister is still investigating.

Both he and his wife, Laureen, found the Internet photo of three-year-old Aylan Kurdi “heart wrenching" and, he said, Canada must do more more. He has previously said Conservatives must take in more refugees from Iraq and Syria.

"Root cause" of tragedy

But Harper made clear that, in his mind, the “root cause” of this tragedy and the wider refugee crisis in the troubled region was Islamic terror.

“And that is the violent campaign being led against millions of people by ISIS. That is why we are part of the international military coalition,” Harper said.

“Refugee policy alone is not remotely a solution to this problem. It is of a scale far, far beyond that.”

NDP leader Tom Mulcair, who is leading in polls nationwide, was visibly emotional when in Toronto he was asked to describe the boy’s photo.

“This morning, we saw a little boy getting picked up on a beach. As a dad and as a grandfather it is just unbearable that we’re doing nothing. Canada has an obligation to act. And it would be too easy to start assigning blame.”

“[Immigration Minister] Chris Alexander has a lot to answer for —but that’s not where we are at right now. We’re worried about how we got here…how Canada has failed so completely,” he said in live televised coverage.

Mulcair said the photo is an image for this generation and likened it to the iconic photograph from Vietnam War that captured a young girl badly burned by napalm, a photograph that mobilized opposition to the war.

Liberal Leader Justin Trudeau's attack was more direct. “You don't get to suddenly discover compassion in the middle of an election campaign. You either have it or you don’t.”

"This government has ignored the pleas of Canadian NGOs, opposition parties and the international community that all believe Canada should be doing more,” he added.

Green leader Elizabeth May was also critical of Harper.

“Stephen Harper has no credibility whatsoever on this issue, having failed to honour previous announcements. We should ramp up the number of refugees welcomed to Canada to 25,000 and we must do more to end the conflict, including living up to our commitments to the UN High Commission for Refugees."

During the prime minister’s remarks, a Ugandan refugee attendee shouted out comments in support of Harper.

Later the refugee confessed he was a recent political escapee from an East African region long stressed by humanitarian crises and war.

“Harper was saying instead of solving the problem of one or two people... why don’t they tackle the real cause of the bigger problem: the war in Syria,” said Wilson Lakony.

"Because if they can stop the war in Syria, then of course there will be peace. People will not flee, and there will be no refugees.”

But the media event in a fruit storage warehouse drew critics. A deaf woman Lisa Arlin who describes herself as "Native American" said she was manhandled and denied entry to the event by the RCMP. She was attempting to raise her case against the Ministry of Children and Family Development with the Prime Minister.

“He doesn’t care about Aboriginal people, like what happened with the residential schools."

“The police officer grabbed me on the shoulder and escorted me here and said ‘no.' And I said, ‘I thought this was open to the public’ and he physically had me removed to here," said Arlin.