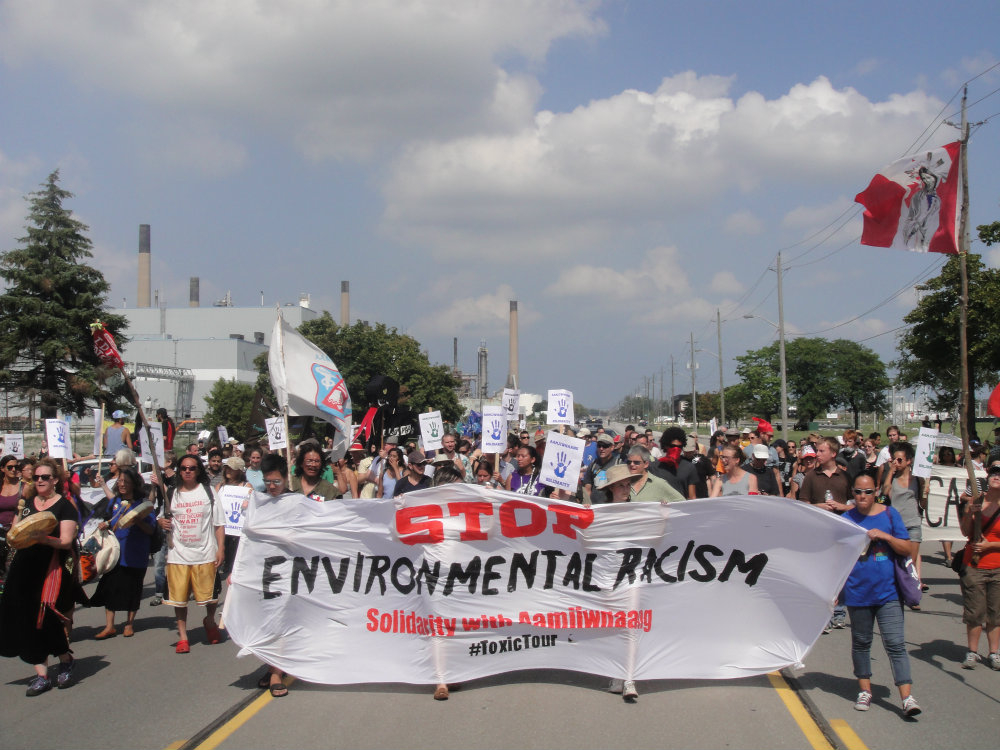 Hundreds of climate activists marched in a ‘Toxic Tour’ through a bleak industrial landscape on the edge of Ontario that is a frontline in Canada’s climate wars.

They were gathered to support the tiny Aamjiwnaang First Nation, whose traditional territory lies near an area known as "Chemical Valley" -- a 15 square-mile area in Sarnia, where over 40 per cent of Canada's chemical industry is based. Nearly 60 oil refineries and factories are crammed into an industrial strip overlooking the St. Clair River.

“We’re not allowed to touch the water in our community because of how badly they (the chemicals) have impacted us,” said Aamjiwnaang activist Lindsay Gray, who helped organize the Sept. 5 protest.

Use of banned chemicals "another form of genocide" against First Nations

Both Gray and her sister Vanessa recalled experiences of watching loved ones suffer from miscarriages or fatal cancers which they believe to be caused by breathing in toxic fumes such as benzene from the refineries.

In addition to diseases, Lindsay Gray said the sex ratio in her community was increasingly out of balance, with nearly twice as many girls being born as boys.

A 2005 study performed by Environmental Health Perspectives (EHP) found that the proportion of live male births in the Aamjiwnaang community had steadily declined from the early 1990s to 2003.

According to the report, chemicals such as these may act as endocrine-disrupting compounds (EDCs), influencing the sex ratio by changing parents’ hormonal make-up, or by inducing sex-specific mortality in utero.

Gray said that studies revealed that Chemical Valley residents had PCBs in their blood and mercury in their hair, while chemicals their parents and grandparents were exposed to are being passed down to future generations.

As well as disrupting birth ratios, PCBs are carcinogenic to animals. People exposed to PCBshave suffered both malignant melanomas and rare forms of liver cancer, but the human link as not as conclusively proven.

“We say that this is another form of genocide,” said Gray, who accused fossil fuel companies of working to change the government's industrial regulations to fit their needs. “We’re really facing the cost of oil. People don’t know that that this is what it’s costing. It’s people’s lives.”

According to Environment Canada, PCBs were banned nationwide in 1977, but regulations allowed companies already using PCB equipment to continue doing so until the end of its service life.

“Despite the large reductions in PCB inventories since the implementation of regulatory controls, releases of PCBs to the environment through spills and fires continue to occur," Environment Canada's website states. "If action is not taken to 'speed up' the pace of PCB phase-out, Environment Canada is concerned that the elimination of PCBs from Canada may not be reached for another generation.”

Vanessa’s most poignant childhood memory was that of her pet cat whom she rescued from the bush as a young child, only to see him of cancer when she was 10 or 11. She recalled how the cancer consumed its body, and saw industrial pollution as a factor behind its early death.

“He was my best friend — and the industry took him away from me," Vanessa Gray said. "That’s when I knew my purpose was to fight against the [oil] industry.”

Living in Chemical Valley took an emotional toll on both sisters. They remember being sent home from daycare after getting sick from chemical fumes, hearing the echoing wail of sirens, facing constant threats of evacuations due to chemical leaks, and watching the sky glow orange at night.

Chemical Valley has a history of leaks dating back to the 1980s, when 11,000 litres of dry-cleaning fluid spilled from a Dow facility into the St. Clair and sank to the bottom.

Just two years ago, another chemical leak left children in the Aamjiwnaang’s daycare centre with red, crusty, eyes and feeling sick. Taken to hospital by their parents, they were diagnosed with 'flu', but the company in question had not notified medical staff of any spillage, according to Lindsay.

“I would ask the oil companies and Stephen Harper to get off my territory...they are not welcome. They are destroying the land and they have lost their privilege of being here,” said Vanessa.

However, some companies have made an effort to clean up Sarnia. In 2004, Dow removed river sediment from the St. Clair poisoned by mercury and other chemicals, five years before closing its plant entirely in 2009.

In 2002, Imperial Oil announced a 92 per cent drop in benzene emissions compared to a decade prior, while NOVA Chemicals slashed their benzene output by 79 per cent, simply by having work crews tighten up leaky valves.

The Aamjiwnaang are concerned not only about the impact of leaks from Chemical Valley, but also the possible environmental impact if pipeline giant Enbridge wins approval for its Line 9 project.

The company is proposing to reactivate a leak-prone 38-year old pipeline to pump oil sands bitumen east from Sarnia through Ontario and the Greater Toronto Area, to terminals in Montreal.

“We’re speaking out against the tar sand expansions particularly with Line 9, which will increase the amount of emissions being produced here in Sarnia next to the Aamjiwnaang Reserve,” said activist Louisette Lanteigne, whose Waterloo home is close to Line 9’s route. "These are the people paying the toll."

Lanteigne said she was shocked to see the landscape itself in Chemical Valley,walking past freshly-planted trees with dead branches at their bases, patches of dead grass, surrounded by soil with a coal-black tinge.

“It’s discouraging. The whole (Toxic Tour) walk is through the chemical producers and it ends at the cemetery, which I thought was extremely poignant because that’s what we’re trying to fight [against], that path of corporate destruction. It always leads to death,” said Lanteigne.

Earlier this year, Ontario Premier Kathleen Wynne announced a new cap-and-trade program to cut carbon emissions, linking her province with Quebec and California in a continent-wide fight against global warming.

Ontario is also pressing ahead with a number of other measures to transition off fossil fuels, including full electrification of its rail network and the development of renewable energy sources including wind and solar power. Already, wind turbines are sprouting less than an hour’s drive east of Chemical Valley, lining the 402 Freeway towards London. 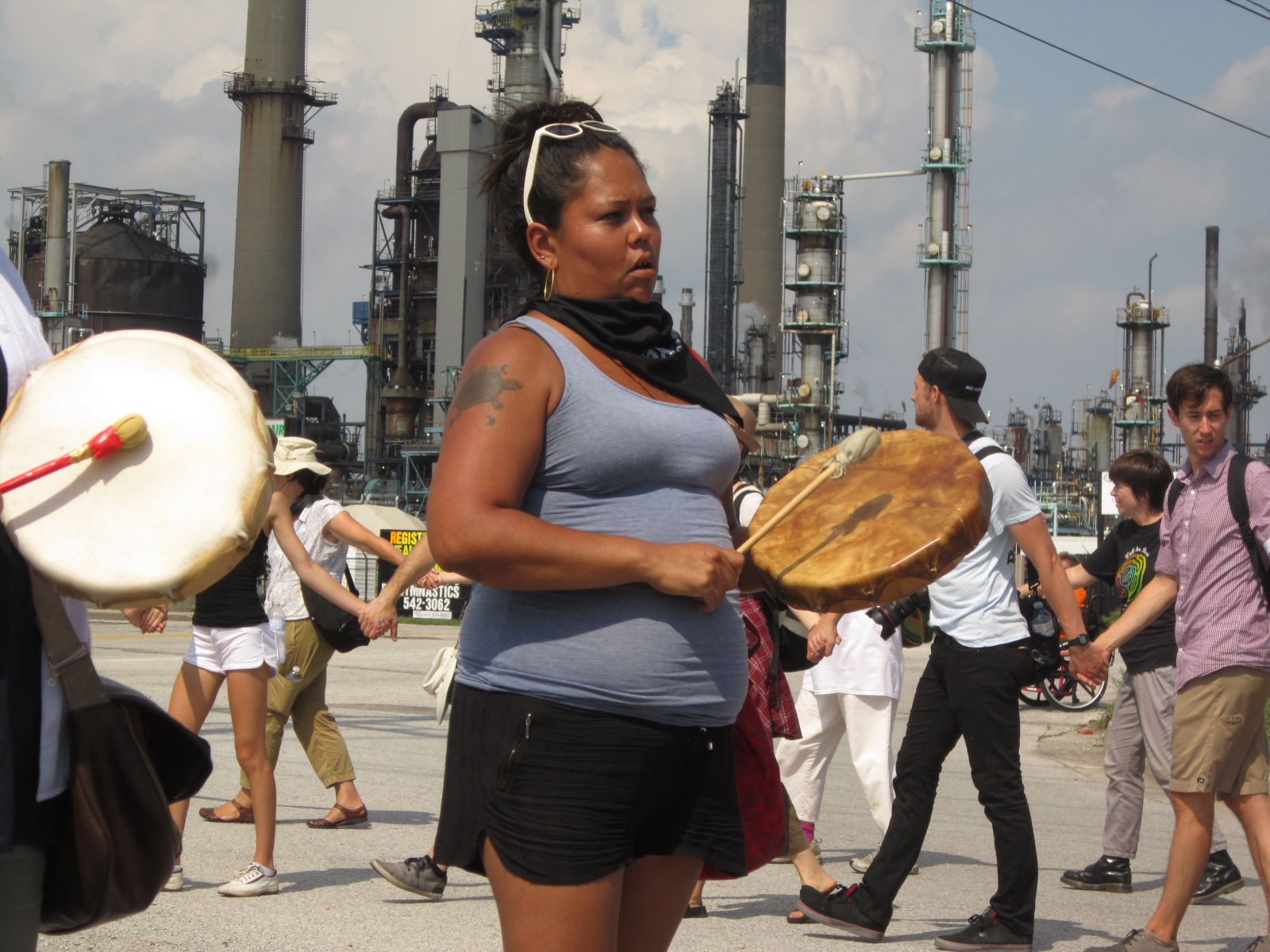 People from outside Sarnia joined in the Toxic Tour for a closer look at the front lines of Canada's chemical industry.

“This place is pumping like a heart, pumping all of this oil," said Kelly Kiyoshk, an Ojibway from British Columbia. "Forty per cent of the petrochemical industry with their pumping [of oil] is coming from this place....for the people to realize what this place is and for the effects that it’s having, that was really important."

Jessica Lyons, a resident from Toronto, said many people living in southern Ontario had no idea that a place like Chemical Valley existed and the impact on communities like the Aamjiwnaang, who cope with the effects of toxins every day.

She expressed hope that the Aamjiwnaang’s leadership would raise awareness of First Nations' territories impacted by the petrochemical industry, and said Prime Minister Stephen Harper was "going down" in this year's fall election for weakening federal environmental regulations to facilitate industry development.