As we digest the implications of the Duffy affair, let’s not forget Robogate 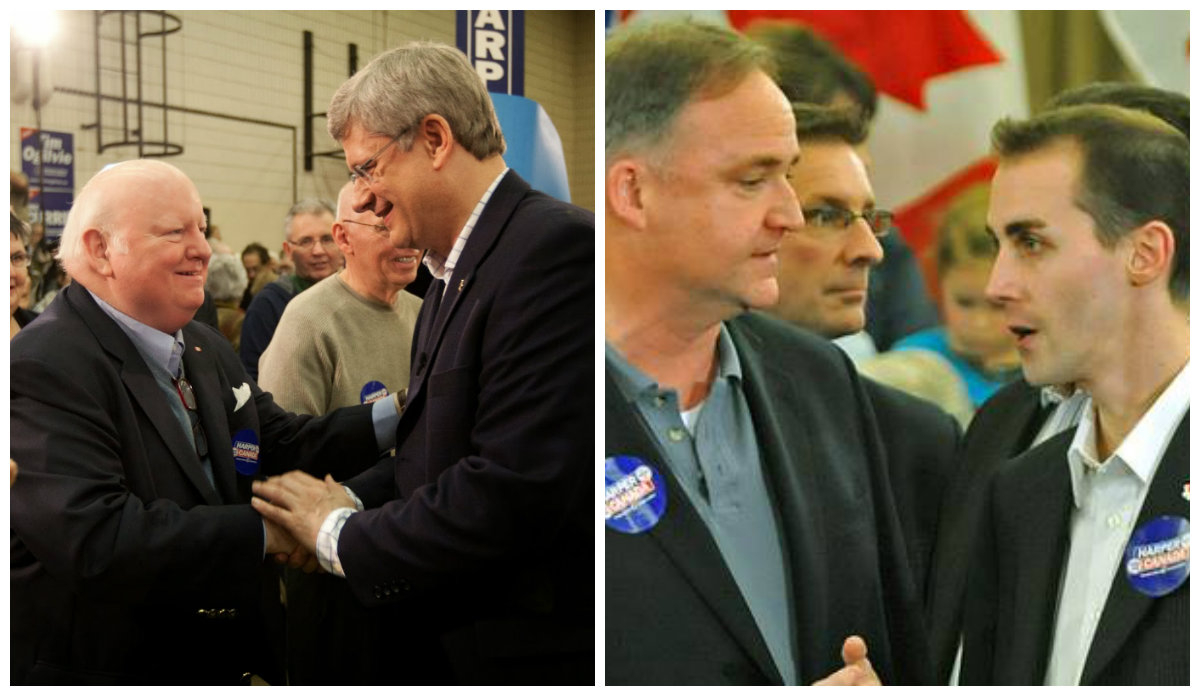 Canadians continue to reel from the Mike Duffy trial, which included compelling disclosures, serial scandalous behavior by staff at the Prime Minister’s Office, and the utterly implausible claim that Prime Minister Stephen Harper, the country’s famously micro-managing leader, was somehow completely unaware of the $90,000 payment by Nigel Wright to cover the senator’s expenses.

As the 2015 federal election gets closer, it’s worth remembering that this is not the first example of murky and ethically challenged behavior to emerge from the the Harper government— an administration that has often bent the truth, and the boundaries of moral judgment, to the breaking point.

Specifically, let's recall the scandal that in recent months has been overshadowed by the Duffy affair: "Robogate."

The roots of Robogate reach back to the 2011 election

When Whitehorse resident Carrie Boles went out on her bike late last week on Thursday, August 27, and defaced several of the campaign signs of incumbent Conservative MP Ryan Leef, she should have realized she was tangling with a fierce and unrepentant proponent in that other Conservative public relations and legal disaster.

Leef caught her in the act, took her down, handcuffed her on the spot, and called in the RCMP – behavior reminiscent of his verbal conduct in the courtroom after the 2011 robocall fiasco, when Leef was defending Stephen Harper.

Leef was one of the Conservative MPs in six separate ridings in which robocalls were felt to have threatened the outcome of the 2011 election. Leef won his seat in that election by a mere 132 votes.

The Council of Canadians commissioned a report the following spring by pollster Ekos Research Associates, which showed that there was a statistical probability that the robocalls directing voters away from the designated voting station could have influenced the outcome of the election in his riding, and the five others.

When the matter came to court the following spring, Judge Richard Mosley chose to believe that this was not the case.

But he also concluded firmly that the thousands of robocalls around the country were based on information taken from the Constituency Information Management System (CIMS), the Conservative Party’s meticulously maintained voter database that is accessible to only a few insiders (the Conservative Party then, and now, has refused to identify those individuals).

Judge Mosley also concluded that this was no aberrant act by some lone wolf, but “an orchestrated effort to suppress votes during the 2011 election campaign by a person or persons with access to the CIMS database.”

He was unable, once again, through lack of information, to identify who the guilty parties were. Nevertheless he had harsh words for the behavior of MP Ryan Leef and his Conservative colleagues, and their legal counsel.

While the legal representatives and witnesses for the Council of Canadians “sought to achieve and hold the high ground of promoting the integrity of the electoral process … the respondent MPs engaged in trench warfare in an effort to prevent this case from coming to a hearing on the merits," adding that "the stance taken by the respondent MPs from the outset was to block these proceedings by any means.”

Many concluded – correctly, as it turned out – that the Harper government had something to hide.

In parallel with this damaging court action, another drama was playing out around the robocalls scenario.

In February, 2012, Sun News reported that an anonymous source had claimed a 22-year-old junior staffer—Michael Sona, communications director for unsuccessful Guelph Conservative candidate Marty Burke— was responsible for the over 7,000 robocalls that had been sent to voters in Guelph alone.

Kory Teneycke, Stephen Harper’s chief spokesperson during the current election campaign, was vice president of Sun News Network at the time. The now-defunct network was 49 per cent owned by Sun News.

Teneycke is a friend of Ray Novak, currently Stephen Harper’s chief of staff.

Teneycke is also a long-time friend of Jenni Byrne, the person now in charge of Stephen Harper’s 2015 election campaign.

The identity of the anonymous tipster has never been disclosed.

At the time of this unsubstantiated declaration, Sona resolutely denied all responsibility for having orchestrated the 7,000 phone calls.

Remember Pierre Poutine? That’s the phony name attached to the purchase of a disposable cell phone in Guelph which was associated with the majority of the robocalls made on Election Day, May 2, 2011. The messages overwhelmingly went to voters known flagged in CIMS as supporters of other parties.

Calls were eventually traced to the Edmonton-based Internet service provider RackNine. The company CEO, like Michael Sona, denied any knowledge of wrongdoing. In March 2012, he revealed that his company had an exclusive contract with the Conservative Party to work only with them, and with no other political entity, during the 2011 election.

A lengthy and slow-moving investigation by Elections Canada, pursued through 2011 and 2012, revealed that Marty Burke’s deputy campaign manager in the 2011 election, Andrew Prescott, was also deeply involved in the production of robocalls.

Prescott bargained with Elections Canada, and later with Crown prosecutors, eventually receiving immunity from prosecution in exchange for testimony against Michael Sona.

A sideshow in the gradually unfolding drama was the revelation in March, 2012 that hundreds of unregistered voters who were not eligible to vote might have cast votes in the Toronto riding of Eglington-Lawrence.

More than 2,700 applications for late registration failed to include addresses or gave false or non-residential addresses.

Current Finance Minister Joe Oliver was the Conservative candidate in this riding.

Part of the Robogate saga reaches a conclusion – of sorts

In August, 2012, failed candidate Marty Burke’s chief campaign manager, Ken Morgan, slipped out of the country to Kuwait— having refused to speak to Elections Canada, and leaving no contact information.

He is apparently still there, although he was spotted once, briefly, in Guelph in January of this year.

Eventually, after much waffling, Michael Sona, the only available potential guilty party, was charged with election fraud in April, 2014, after a succession of legal delays and obstructions from the Conservative Party machinery.

In the courtroom, testimony previously given to Elections Canada from six Conservative Party staffers (miraculously produced by Conservative Party lawyer Arthur Hamilton) repetitively affirmed that Sona had admitted to creating the robocalls.

Interestingly, all the witnesses were interviewed by Elections Canada with Arthur Hamilton present.

There were hints and disclosures, here and there, that other persons had been involved. For some reason these leads were not followed up.

Equally interesting is the fact that a number of personnel in the office of Marty Burke, on the instruction of Arthur Hamilton, refused to cooperate with Elections Canada.

Michael Sona, like O.J. Simpson, never testified in his own trial.

In August, 2014, Michael Sona alone was convicted of one single charge – acting as the cause of the Guelph phase of Robogate. On November 19, 2014 he was sentenced to nine months in jail, becoming the first person in this country’s history to be convicted under the Canada Elections Act.

Judge Gary Hearn said that while Sona was clearly implicated in the scandal, he believed that the junior staffer did not act alone.

The trial did not address the robocall issue in other parts of the country.

Mr. Sona’s lawyer initially appealed both the conviction and the sentence, but as of this past April is appealing only the sentence.

Ending with a whimper… and a snarl

In the other side of Robogate, the legal action brought by the Council of Canadians against Ryan Leef and his five colleagues was dismissed for lack of evidence that the calls had caused any of the six candidates to win their seats illegally.

The six defendants then promptly sued the Council of Canadians for $355,000 in legal fees.

Judge Mosley, mindful of his impression that “the applicants in this matter were genuine public interest litigants motivated by a higher purpose” awarded the MPs a mere $13,000, which, held against a previous $18,000 cost assessment against the Council of Canadians for some preliminary work in the case, meant that the MPs’ actually had to pay the Council back to the tune of $5000.

A spin doctor for the Conservative Party called this a victory.

The Harper government, many months later, then quietly paid the six MPs legal costs out of public funds, from the budget of the House of Commons’ secretive Board of Internal Economy. The official Board minutes are wonderfully vague, but insiders have confirmed that this occurred.

Stephen Harper’s answer to Robogate, widely considered to be the biggest case of election fraud in Canadian history, has been the so-called Fair Elections Act— which has been roundly condemned by academics, the media, political leaders and current and former Elections Canada CEOs for weakening the investigative powers of Elections Canada.

From the past, a vision of the future in Harper’s hands

Thanks to the Duffy trial and Robogate, we can now see clearly what the Harper government does when confronted by embarrassing or legally suspect activity within the Conservative Party: it resorts to obfuscation, aggressive and sustained resistance to any disclosure, carefully orchestrated public statements, major gaps in information, hidden critical data, and outright disinformation.