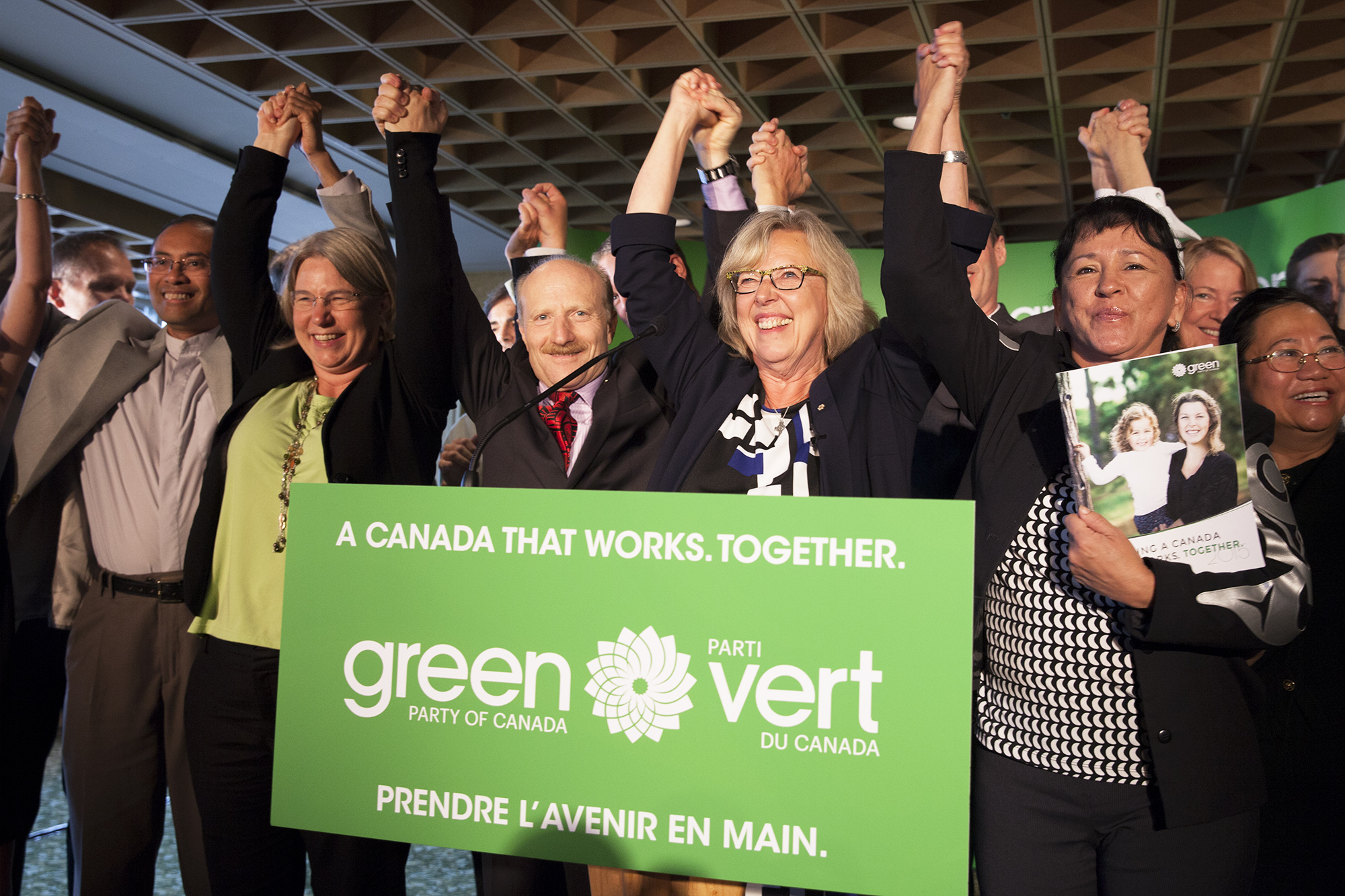 Elizabeth May unveils the Green party platform among B.C. Green candidates at a media event in downtown Vancouver on Wednesday. Photo by Mychaylo Prystupa, National Observer
Previous story
Next story

Greens became the first federal party to unveil its "fully costed” platform on Wednesday, pledging billions in promises on dental care, affordable medicines, and free university and college tuition —and to pay for it in part by axing fossil fuel subsidies.

"We must end off fossil fuels by mid-century. No waiting!” said Green leader Elizabeth May to cheerful supporters in Vancouver.

May said the oil sands alone takes in $1.3 billion annually from Ottawa despite statements from Stephen Harper that Conservatives have already cut the subsidies.

"Stephen Harper actually pledged at various G20 summits to eliminate fossil fuel subsidies in Canada, and actually when I raised it in the Maclean’s debate, he said he’d already done that,” said May, standing next to her B.C. Green candidates.

“But in fact, we’re still subsidizing fossil fuels, and in case he didn’t know, Liquefied Natural Gas is a fossil fuel,” she added to laughs from the B.C. crowd. “And they just announced a whole new subsidy for that."

May made the promise ahead of a long awaited similar pledge by NDP’s Tom Mulcair to cut “billions” from the oil sands too. The NDP leader will rally Vancouver on Sunday. Mulcair’s spokesperson declined to comment on this story, saying “please stay tuned for the details of our fully costed platform” in an email.

How Greens differ from the NDP

When asked to clarify how Green’s oil sands policy differs from the NDP’s, May said:

“We believe we have to arrest the growth in oil sands. We’re currently at two million barrels of bitumen a day. And we know that the Alberta [NDP] government is still hoping to grow to additional levels of production.”

“We oppose as a matter of principal... any shipment, in any pipeline, whether headed west, south or east, of bitumen unprocessed with diluent headed for tankers for our coastlines.”

"So that’s a very clear difference,” she added to huge applause.

Conservatives didn't respond to questions about the oil sands subsidies, but did acknowledge recent efforts to advance the natural gas sector on the west coast. “We announced an accelerated capital cost allowance for the LNG sector, to ensure jobs and growth in B.C.," wrote a campaign spokesperson.

"We need to seize opportunities to grow our economy here at home. Liquefied Natural Gas is one that we've responsibly supported."

B.C. is a hot battleground for all parties. In the 2011 election, Conservatives took the most seats. But polling suggests that Tories are about to take a serious hit, with threehundredeight.com seat projections showing the NDP increasing its seat share from 12 to 23. Greens are also believed to be competitive on Vancouver Island and in some ridings in the Lower Mainland. Star candidates include SFU biochemist Lynne Quarmby, and former CBC meteorologist Claire Martin.

Greens are the only party pledging to stop the growth the oil sands —the fastest growing source of the country's greenhouse gases, according to Environment Canada.

Liberals and NDP are promising to overhaul the environmental review of the pipelines that would enable that growth. But Mulcair has so far only said he’s against Keystone XL and the Northern Gateway pipelines. He's stopped short of opposing or endorsing the Kinder Morgan's Trans Mountain expansion and Energy East pipeline proposals.

Trudeau, however, has expressed "steadfast" support for Keystone XL in the past —even flying to Washington D.C. in 2013 to say so.

“There were some people who raised an eyebrow, absolutely,” CBC News, reported Trudeau saying at the time. “I'm seen as a strong, young progressive with an environmental background. The fact that I'd be talking positively about the project I think got people thinking about the fact that perhaps it's not as bad as it's been caricatured."

Trudeau will rally a Vancouver crowd on Thursday.

The Canadian Association of Petroleum Producers (CAPP) was asked to comment on the proposals to end oil sands subsides. We'll update this story if they do.

But already Conservative campaign ads attack Trudeau for not taking a firmer position in support of the Energy East pipeline.

May also said Greens would also pay for their spending promises by increasing the federal tax on large corporations, which she says is currently the lowest in the industrialized world. She said hiking it from 15 to 19 per cent "will not lead a flight of capital”, and would provide $7.5 billion to the federal treasury.

May also said surprisingly significant revenues would come from the Green plan to legalize marijuana. “Apparently this [stuff] grows well in Canada," she said to laughs.

The full Green platform — including plans to expand rail, phase out coal plants, restore CBC and veterans funding, and reverse the decision to end Canada Post deliveries —is on the party's website.