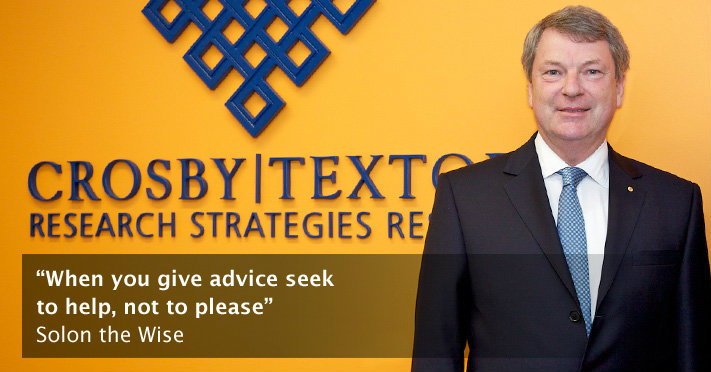 Lynton Crosby in photo from his website, Crosby Textor
Previous story
Next story

Reeling from recent scandals and sinking in the polls for Harper's response to Syria's refugee crisis, the Conservatives have recruited help from Australian strategist Lynton Crosby, who has been described as "the Australian Karl Rove."

Crosby helped UK Prime Minister David Cameron pull off a stunning win for the Conservatives earlier this year. While earning the nickname "Wizard of Oz" for his effectiveness, shepherding former Australian Prime Minister John Howard to four consecutive wins, his team has been accused of using dirty tricks to win in the past. Crosby's business partner, Mark Textor, was successfully sued by Labour candidate Sue Robinson for damages after his suggestions that she supported abortion at nine months in 1995. Crosby was once accused of urging London mayor Boris Johnson not to court support from "[expletive] Muslims" while working on his campaign.

Crosby Textor has been linked to petroleum and fracking interests, though his representatives deny this claim.

Crosby's company was also worked as principal pollster and strategist for Australia's current prime minister, Tony Abbott, and the Liberal Party from 2011 to 2013.

Since winning the election, Abbott has implemented many similar policies to the Harper Conservatives, including auditing charities and rolling back environmental regulations to speed up resources industry development.

According to Maclean's magazine, Crosby has been recruited amid rumours of discontent among Conservatives over national campaign director Jenni Byrne. Byrne has been blamed for keeping out "smart, experienced people" from the party's war room, while relying heavily on personal friends including Conservative Party spokesperson Kory Teneycke and Prime Minister Stephen Harper's chief of staff, Ray Novak.

In an hour-long talk on YouTube about campaigns, Crosby tells listeners to "ignore most of the opinion polls you see in newspapers" and to be mindful of tone while running a negative campaign.

The Guardian reports that one of Crosby's favourite phrases is "below the radar" — while media assumed that Conservative leader David Cameron's campaign was stalled, "Crosby’s well-funded infantry were quietly, busily seizing the marginals," leading to his eventual win.