Why was Bruce Carson able to lobby for oil and gas right under the PMO's nose? 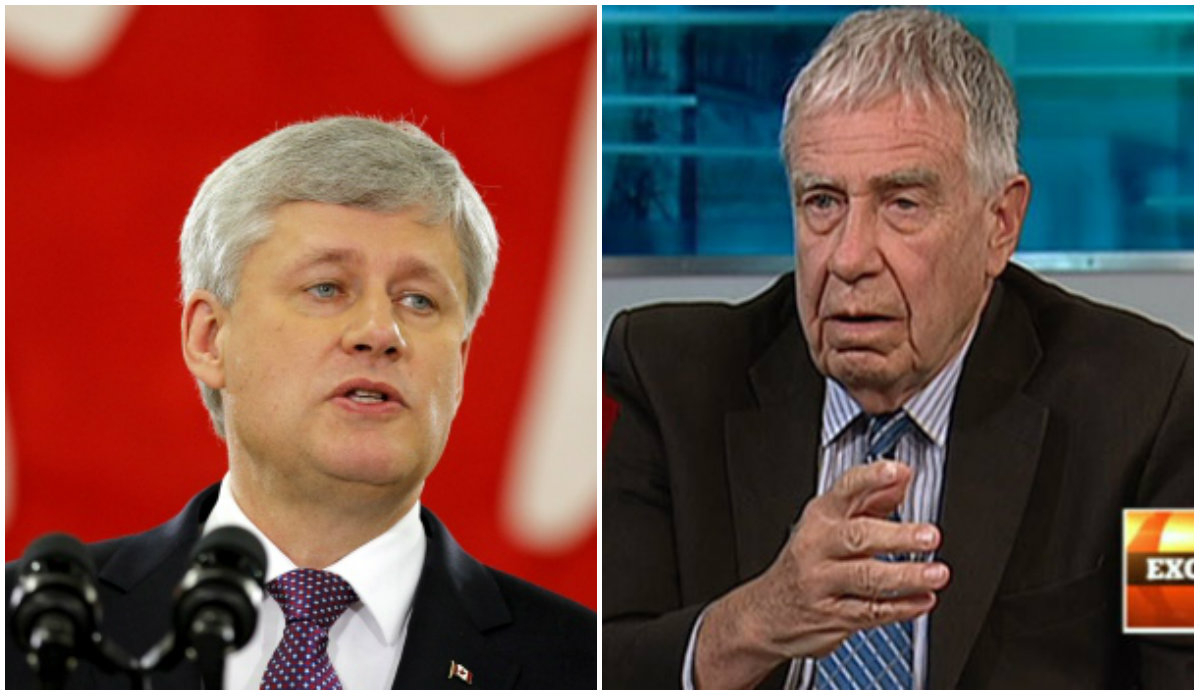 The only time I met Bruce Carson — who was once an acting chief of staff in the Prime Minister’s Office (PMO) — he asked me to take down a blog I had written.

The 2011 post focused on how Carson had shifted from handling the energy file in the PMO to acting as the political quarterback for a joint government-oil industry push to get pipelines built.

I replied that he should interpret the attention as a compliment for his political skills.

Those political skills have landed him in court next week, where he faces multiple charges for influence-peddling and prohibited lobbying, using his government connections for personal gain with.

Though this has yet to be proven in court, the RCMP has assembled some compelling evidence suggesting that Carson's lobbying on behalf of the Canada School for Energy and the Environment (CSEE) and the Energy Policy Institute of Canada (EPIC) broke the rules forbidding high-ranking government officials from lobbying the federal government for five years after they leave.

Why are government officials barred from lobbying the feds for five years? It's so they don't abuse their influence within government to help industry get its way with the law. But Carson began using his insider influence to help oil and gas interests almost immediately after he left the PMO.

Carson was so good at working the political system that one of his colleagues at EPIC called him the “secret sauce” in their ability to influence government to benefit industry interests. EPIC's founding membership includes companies including Enbridge, Suncor, CNRL and TransCanada, and mainly represented their interests to make Canada a "responsible energy superpower."

While at CSEE, Carson worked hand-in-glove with the oil industry and federal officials to advance a national energy strategy with a goal of getting more pipelines built across Canada.

This included organizing a cross-country set of “dialogues” on the oil sands on behalf of CSEE and the Canadian Association of Petroleum Producers (CAPP) as well as authoring a report for CAPP on those meetings.

And according to the RCMP, Carson was paid to do this through both the industry-funded EPIC, which he set up as a lobbying vehicle for the oil industry and CSEE. 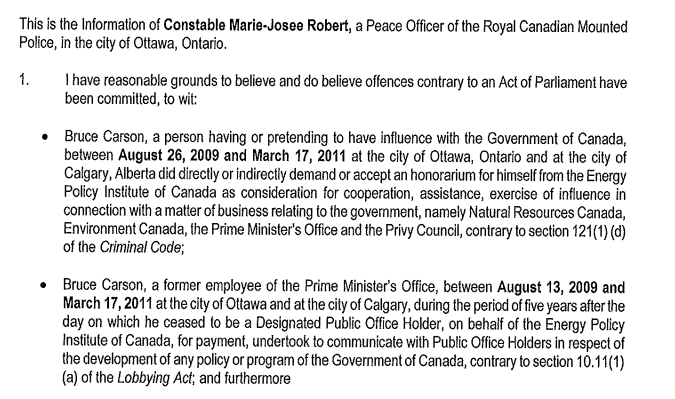 screenshot from RCMP document on Carson

Helping the oil industry "up their game"

But just like Mike Duffy, Carson could argue that by playing up his government records, he was simply following the PMO’s script. The feds knew what he was doing, and could have seen whether he was overstepping in his role.

In a 2009 speech to the Canadian American Business Council, Carson says that in his role as an official advisor he was trying to “bring together the right group” to “help our federal Environment Minister, Honourable Jim Prentice put the flesh on the bones of what had been agreed upon by the PM and President.”

Prentice made Carson the chair of the Oil and Gas Working Group, which brought together the federal and Alberta governments with the oil industry (but not environmental groups or academics) in confidential discussions on greenhouse gas regulations for the oil industry. Carson regularly cc-ed Prentice on his emails.

Internal documents acquired by Greenpeace under Access to Information legislation show that the Harper government made Carson an integral part of their own secret Oil Sands Advocacy Strategy after he left the PMO in 2008.

That strategy clearly identified who the government saw as their “allies” (oil companies, Government of Alberta) and “adversaries” (environmental NGOs and Aboriginal groups).

I suspect Carson will argue that he wasn’t really a lobbyist because he was simply doing what the Harper government wanted him to do: use his political skills and connections to help the oil industry up their game.

Carson left the PMO in 2008 to become the first executive director of the Canada School for Energy and the Environment. This position was made possible by a $15 million grant from the federal government to the Centre and a redefinition of its mandate from a focus on technology to a focus on policy, which is why I viewed it as an informal secondment for Carson from the PMO to the oil industry.

As a climate activist, I worried about the unparalleled access to government that Carson brought to the oil industry— and his knowledge of how to stickhandle a policy through the gridlock of federal-provincial energy policy-making.

The RCMP document illustrates this with details on his regular communications with senior bureaucrats, federal cabinet ministers and their political staff, as well as with Nigel Wright (who, as Stephen Harper’s then-Chief of Staff, headed up the PMO).

The degree to which Carson was integrated into the federal government’s own Oil Sands Advocacy Strategy is astounding.

The big question: who else should be charged?

In June 2009, Carson attended a meeting in Calgary between nine senior oil industry executives and the most powerful federal bureaucrat: then-Clerk of the Privy Council Kevin Lynch.

Lynch would never participate in such a gathering without the knowledge and blessing of the PMO.

“a concerted and on-going effort that runs for a year to 18 months. It was agreed that Doyle/NRCan (Natural Resources Canada) and Carson/Canada School would be part of an upcoming meeting of the CEO working group on oilsands/energy […] Next steps will be for Carson/Canada School to set an agenda for a subsequent meeting with CEOs, governments and universities.”

Staff from the Department of Foreign Affairs’ Energy Secretariat subsequently sought clarification on how the “Carson process” (to use their own term) was related to the federal government’s Oil Sands Advocacy Strategy.

“We understand that this is intended to be an extension of the ‘alignment’ process started in Washington recently [at a February meeting between CAPP and Canadian federal officials to develop shared messaging and joint outreach to US government] rather than a separate idea. CAPP has been in Washington this week and has been citing the Calgary discussion [where Carson was present] as a further step in their effort to have a coordinated engagement strategy in place for the autumn. I do not believe that this would or should delay the July session. Industry is telling us that they see the Carson process as an extension of what we are already debating, but at a senior industry and academic level.”

Also in June 2009, a Natural Resources Canada (NRCan) official reported back to her Deputy Minister on a meeting with Dave Collyer, President of CAPP.

“although there had been consideration in Calgary of a coordinating role for Bruce Carson that the lead is with you (with Bruce supporting) and Bruce is aware of that change (I am meeting with Bruce tomorrow on your behalf and will send a separate note after that meeting on its outcome) [… ] For Bruce tomorrow, I intend to focus on the role the Canada School could play in ensuring the strategic hydrocarbon R+D piece that Indira Samarasekera is leading strengthens the oil sands outreach work and our intention is to keep Bruce in the loop [section redacted] strengthens the overall strategy Kevin has asked you to lead.”

Carson subsequently attended a March 2010 meeting in the CAPP office in Calgary between oil CEOs and federal and Alberta officials. There, he discussed a proposal from CAPP for better coordination with the federal government as part of their efforts—specifically, on a pro-tar sands PR and lobbying campaign that was underway at home, at in the U.S. and in Europe.

In Natural Resources Canada's minutes for that meeting, Carson was identified as both a “former senior advisor to the Prime Minister” and as “Executive Director of the Canadian School for Energy and the Environment,” which makes it clear that the federal officials in the room knew they were dealing with someone who was barred from lobbying them.

None of this is intended to condone any potential law-breaking on Carson’s part.

But the Harper government gave Carson $15 million to set up his own energy policy institute, invited him to their secret strategy sessions with the oil industry and had him leading a component of their own tar sands lobbying campaign.

So, if Bruce Carson is guilty, who were his accomplices in the PMO?

ATIP on Carson regarding oil and gas