Veterans slam Harper's olive branch as too little, too late 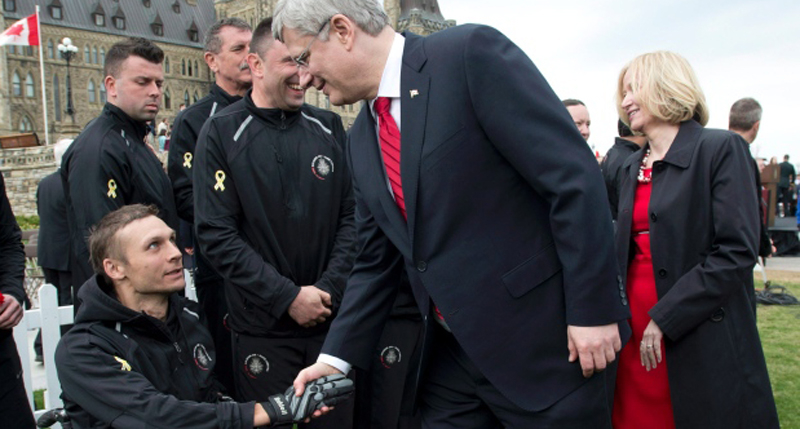 Stephen Harper seemingly offered an olive branch to veterans at an Ottawa rally on Sept. 11 – but only after his prospective guests underwent pre-screening to weed out any likely troublemakers.

One group of troublemakers – at least in Harper’s eyes – is the Anyone But Conservatives (ABC) Veterans Campaign 2015 movement, who blasted Harper’s move as an election stunt, after years of deep cuts to veterans’ services and benefits that have left many former soldiers struggling to receive access basic care.

“The Conservatives clearly only want veterans who agree that their lousy treatment of returning soldiers is okay,” said Tom Beaver, ABC’s national chair. “It doesn’t impress me.”

Beaver himself did not even bother signing up for the rally, but said that his fellow ABC member Ron Clarke did try doing so via the Conservative Party’s website, only to be barred from registering.

“They cherry-picked who they wanted to attend this thing. It’s typical of the Conservatives. They don’t want anyone talking against them,” said Beaver.

In Beaver’s view, pre-screening attendees would shield Conservatives from knowing the true effects of their budget cuts on veterans’ lives, adding that if Harper truly wanted to engage with veterans he would “open the door,” and invite anyone who wanted to meet him.

“I would ask for him to start seriously working with the grass-roots veterans. We’re losing more and more people to suicide and it doesn’t have to be that way,” said Beaver, when asked what he would say to Harper if he had the chance. “Personally, I don’t hate the man. Do I dislike the way he runs the country? Yes. That’s why I want to see him gone and that’s my choice as a Canadian.”

For now, Beaver and his fellow veterans are still coping with the fallout from deep cuts to veterans’ services rolled out over the past decade.

These include the replacement of lifetime pensions with a single lump-sum payment for injured personnel, whose total amounts are worth less than the old system’s monthly payments, a measure first tabled by Paul Martin’s Liberal government in 2005 but continued apace under Harper.

Soldiers returning home from war have also had to cope with deep federal cuts that resulted in the closure of nine Veterans Affairs Canada (VAC) offices across Canada last year, which provided essential frontline services for former military members.

In 2012, a group of wounded Afghanistan veterans angered by the lump-sum injury payment system launched a class-action lawsuit against Ottawa, arguing that a social contract existed between military members and the government.

But the government argued last year that it did not have a ‘sacred obligation’ to help veterans, breaking a nearly-century old tradition that started with Prime Minister Robert Borden, who promised World War I soldiers that they would be looked after when they returned home from the trenches.

An Insights West poll surveying 1,006 Canadians from Aug. 19-21 revealed widespread anger at veterans’ treatment, with 73 per cent of respondents stating they were either ‘moderately’ or ‘very’ dissatisfied with the government’s treatment of wounded war veterans. Of those dissatisfied, 64 per cent had voted Conservative in the 2011 election.

“They’ve had enough trouble in the polls and I think the ABC Veterans [Campaign] has had something to do with that.”

According to the latest CBC Poll Tracker results, the NDP remain in the lead with 32 per cent of those surveyed favouring Thomas Mulcair's party in Canada's 2015 federal election. Justin Trudeau's Liberals are second at 29.8 per cent, while Harper's Tories are third by a very slim margin at 29.7 per cent, as of Sept. 10.