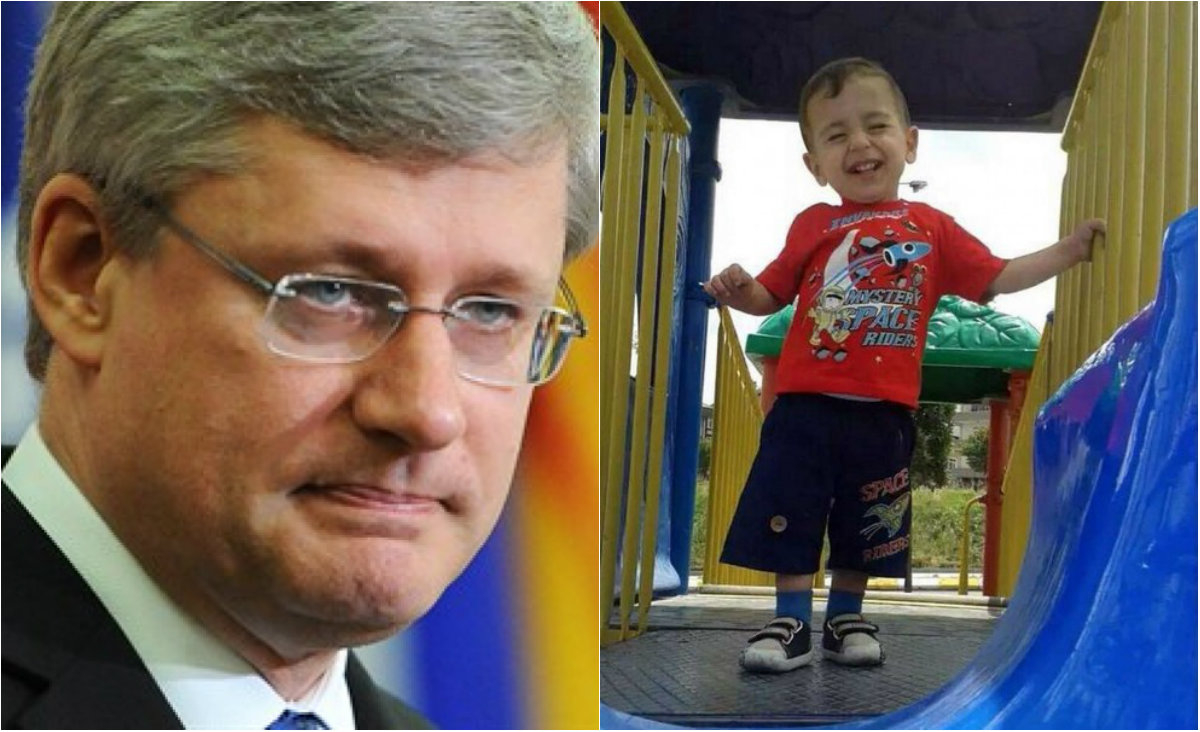 It is a truth universally acknowledged, that a prime minister seeking re-election must be in want of a plausible alibi.

Or a halfway decent lie.

Both options have deserted the prime minister and the microphone into which he recites, with numbing repetition, the canned “media lines” concocted to distract everyone from the panicked chaos of a campaign so badly off the rails that it's been outsourced to a temporary foreign worker.

For Stephen Harper, there’s nothing to fear but not enough fear. So fasten your seatbelts, it’s going to be a bumpy ride.

So long as the public's afraid, the thinking goes, it won’t notice that the stench of casual lying that surrounds the prime minister never went away. The wind just shifted direction.

Take Harper's insulting whopper that Canada is some kind of world-beater in the refugee game.

As if he didn’t already know that was patently false. As if he didn't know that in 2012 his own government, with malice aforethought, deliberately employed cruel and sweeping measures to deter refugees from darkening our doorstep.

And their methods worked. From 2010 to 2014, Canada dropped from 5th to 15th in UNHCR rankings of refugee receiving countries. The largest drop came after 2012.

Harper's foot-soldiers even brayed about this in mail-outs to constituents, boasting that refugees have been stripped of their "gold-plated" health benefits.

"Shocks the conscience and outrages our standards of decency"

Such gold-plated luxuries as pre-natal and obstetric care for pregnant women, and pediatric care for children.

And life-saving insulin. And cardiac medication for the indigent and vulnerable. And anti-depressants for suicidal young victims of sexual violence. All pried from the grasping fingers of greedy refugee claimants.

Denial of of these benefits and more--all freely available to Canada's poor--is detailed in Federal Court Justice Mactavish’s ruling last year, which found the government in breach of the Charter:

I am satisfied that the affected individuals are being subjected to “treatment”... (that) is indeed “cruel and unusual”. This is particularly... so as it affects children who have been brought to this country by their parents. The 2012 modifications to the Interim Federal Health Program potentially jeopardize the health, the safety and indeed the very lives, of these innocent and vulnerable children in a manner that shocks the conscience and outrages our standards of decency.

Ebenezer Scrooge doesn’t have much on Stephen Harper, who also stripped due process from Roma minorities from Eastern Europe and families fleeing Mexico’s cartel-driven killing spree. Mexico, which has suffered more deaths and disappearances since 2007 than Iraq and Afghanistan combined, was designated a safe country of origin by the Harper government in the 2012 refugee crackdown.

And for refugees who make Canadian landfall ahead of their young children, reunification is agonizingly slow and dangerous. Compared with a 6 month processing time for children of economic migrants, refugees must wait, often in life-threatening circumstances, 31 months.

But the efforts paid off. The Ottawa Citizen reports that from 2012 to the most recent fiscal year, some $350 million budgeted for refugees and immigration was returned, unspent, to the government.

Fear is the new fear

As the Conservative myth of freeloading refugees evaporated in the face of little Alan Kurdi's lifeless form on a Turkish beach, Harper instantly pivoted to Canada’s anemic military contribution to fighting terrorism.

That response bombed when observers noted that our military efforts are actually helping Bashar al-Assad, the tyrant responsible for the overwhelming majority of Syrian casualties. Well, ‘helping’ might be too strong a word, given that we’ve conducted only four bombing missions in Syria out of more than 2000 by the US.

Just enough to collect the air-strike badge, at a cost of $500 million by the end of this fiscal year.

The prime minister announced yesterday that refugee aid will increase, but security screening is now the order of the day. Screening is an opportune dog-whistle for a government that was supposed to scare us with a terrorism announcement three times a week before the writ dropped.

And given recent events involving a certain coffee cup, however, Canadians might be skeptical that the Harper government knows anything about screening applicants.

In reality, events in Syria, Libya, Eritrea and Europe have far outstripped domestic politics. This film from the Guardian offers a glimpse of what is happening in Europe, which is only a fragment of the problem. Some 60 million people worldwide have been forcibly displaced, more than half of them children. The facts on the ground demand an immediate, urgent and massive global response.

Europe is cracking beneath the weight of its burden, and Canada has a responsibility to step up and shoulder our share.

"To put (up) bureaucratic hurdles when this level of suffering is unfolding is unconscionable."

In a recent interview with the CBC, she expressed impatience with the Harper government’s “politics of fear.”

On the subject of our approach to the crisis, Arbour said that for Canada "to put (up) bureaucratic hurdles when this level of suffering is unfolding is unconscionable."

Expressing strong confidence in our national security, she instead pressed for Canada to return to much fuller global engagement.

That’s the way it works. Canada has not been in that game for the last decade."

Has Canada ceased to matter on the world stage? As The Economist reported Thursday, we're seen as free-loaders, having cut our foreign aid budget by 27% since 2008. It's the worst record in the G7, which on average has raised its commitments.

In the context of efforts now being mounted in capitals around the world, Canada's lack-lustre approach to the Syrian refugee crisis is a national embarrassment. For a country like ours, influence in global affairs is earned by sacrifice and heavy lifting. Duty calls, and fear or no fear, the time has arrived for us to answer, as generations have before us.

It used to be said, and not that long ago, that "the world needs more Canada."

Today the world needs us to make that true.