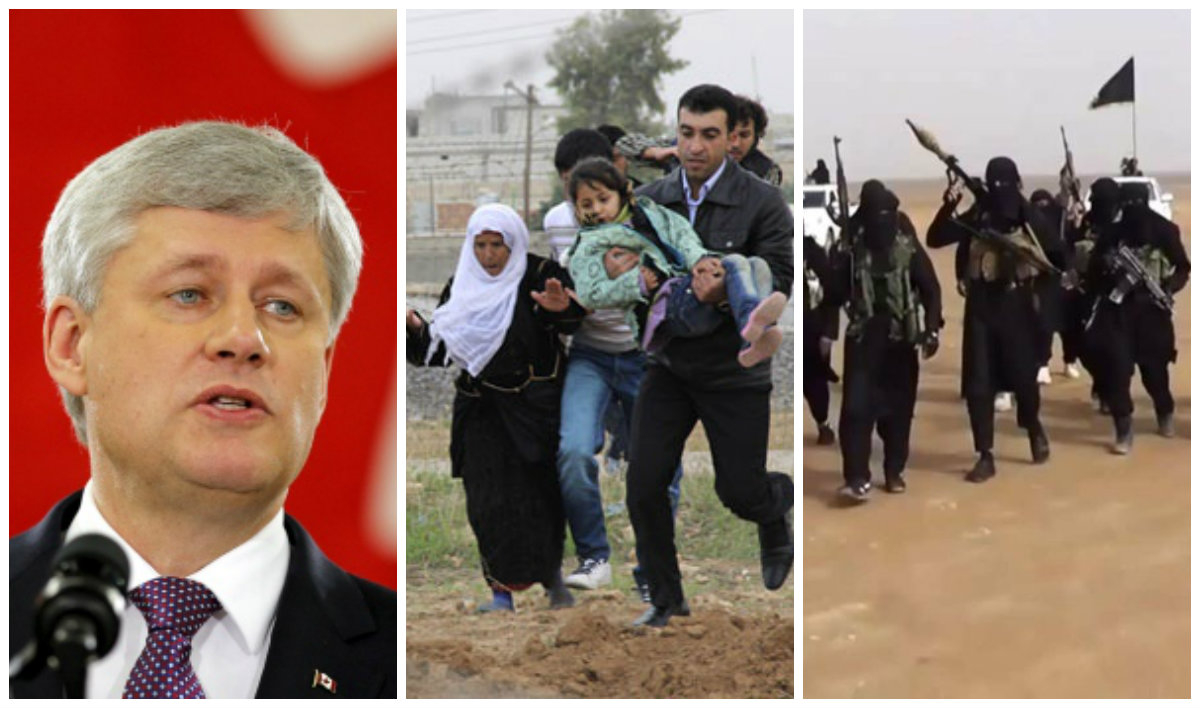 Since Stephen Harper became prime minister in 2006, Canada’s foreign policy has slipped and sometimes careened downhill, becoming ever more simplistic, ideological and out of touch with the interlocking complexities of international relations.

And now one of the most urgent realities facing our world— global climate change – has handed him his latest foreign policy nightmare.

It is now acknowledged that climate change set off the Syrian civil war, and that it is creating increasingly desperate conditions throughout many parts of the Middle East— conditions that sustain conflict.

Waves of refugees have changed the story line forever

People around the world have been horrified by the image of the tiny form of Alan Kurdi washing ashore on a beach in eastern Turkey. His death has become symbolic of the suffering of the hundreds of thousands of Syrian people, and of refugees everywhere. Galvanized, the governments of Germany and Austria have undertaken massive programs to relocate these waves of Syrian refugees.

The Canadian government, on the other hand, has dithered—because this global call for compassion has created a political disaster for Stephen Harper.

Since the beginning of his majority government, his attitude and policies towards most refugees, and especially Muslim refugees, have been punitive and hard-line, as his “base” wants them to be. They have also been sharply and widely criticized.

Barely a year ago, Immigration Minister Chris Alexander, now running around the country noisily lauding his government’s generosity towards refugees, used one of the Conservative government’s infamous omnibus bills (Bill C-585) to radically reduce or even eliminate almost all health-care benefits to persons claiming refugee status.

A year ago, he unhesitatingly laced his comments repeatedly with the term “bogus,” a term also used over and over by his predecessor, Jason Kenney, implying that false claims for refugee status were common.

Individuals applying but not yet approved for refugee status now have no coverage for heart disease, pregnancy, vaccinations or diabetes, or any other health problem that does not constitute a risk to public health (for example a serious communicable disease).

When physicians and refugee support groups throughout the country challenged the Harper government’s unwarranted action in the Federal Court as “cruel and unusual” and won, Harper refused to accept this legal opinion. Instead – characteristically – he immediately appealed the decision.

Why be kind to Syrians when you're busy fighting a war?

Whenever Chris Alexander or the prime minister have been pressed in the last few days by hard questions about the refugee situation, they have both deflected the conversation back to the increasingly threadbare notion that bombing ISIS is just as important as addressing the refugee situation.

But the relationship between dropping bombs from the sky and a massive refugee crisis is not a congenial one.

For example, the village in which Alan Kurdi's family lived, Kobane, has been reduced to rubble by a combination of ISIS shelling and Kurdish counterattacks, but also from U.S. aerial bombardment.

Stephen Harper’s constant reiteration of the threat from “Islamist jihadists” is widely dismissed by experts such as Canadian military historian Gwynne Dyer as being grossly overstated, and primarily motivated by political opportunism.

Canada’s Ministry of Defense has a website devoted to Operation Impact, the name given to military activities in against ISIS.

On this site, there are statistics, short videos with stirring soundtracks, and abundant displays of Canada’s expensive military hardware and organizational efficiency.

All this military activity is part of Canada’s contribution to the Middle East Stabilization Force — another title that strains credulity, given recent history in the region.

If Canada's military actions was vitally important to effort to drive ISIS them out, it's not obvious. As of this August, ISIS still occupied most of the areas it had originally invaded. Meanwhile, thousands of civilian deaths have been incurred.

Aerial bombing has also been widely employed, sadly, by the Syrian army, using “barrel bombs,” expressly designed to indiscriminately kill people, including civilians. In fact attacks by the Bashir Al Assad on his own people have caused nearly a quarter million deaths, among which at least 20,000 are children— vastly more than have been killed by ISIS.

Here’s where the federal government’s approach to conflict in the Middle East becomes utterly incompetent.

The Conservatives' knowledge base does not appear to include a rational understanding of, or even any real interest in, Muslims or the Muslim faith. As a consequence, Harper pays no attention to the critical distinction between the two branches of Islam, Sunni and Shiite, and appears indifferent to the fact that much of the conflict in that part of the world is between these two branches of the religion of Mohammed.

In brief: followers of the Sunni version of the Muslim faith constitute approximately 85 per cent of all Muslims, and Shiites comprise the other 15 per cent. In the Middle East, the split is estimated to be about 65-35 (Lebanon is estimated at about 36 per cent Shiite, though no official census based on religion has been taken for decades due to the delicate balance of power between religious power groups).

Iraq, Iran, Pakistan and the government of Syria are Shiites (in Bashar al-Assad's case, Alawite — a distinctive branch of Shia Islam). Saudi Arabia is the largest and wealthiest of the Sunni nations in the region, and its strict fundamentalist Wahabi version of Islam is shared, unfortunately, by the brutal ISIS rebellion. Unlike Bashar al-Assad's ruling Alawites, the majority of the Syrian population are Sunnis, albeit a more moderate branch than the Saudis and ISIS.

The two main divisions of Islam have been at loggerheads for centuries, although there have been attempts to bring them together in recent years.

Stephen Harper has undertaken, with dollar signs in his mind, and with supreme political naiveté, to supply weapons - $15 billion worth of light armoured vehicles or LAVs – to the rigid Saudi regime, which has one of the worst human and civil rights records in the world.

And what has Saudi Arabia been up to lately? Aside from being the only formal regime that beheads people, for such crimes as witchcraft and adultery, the Saudi government is bombing the hell out of the cities and towns in Yemen – and like ISIS, destroying cultural and archeological treasures – just because Yemen’s Sunni government has been deposed by a revolt of Shia Muslims.

And they’re supported by the US in doing so. American drones are carrying out surveillance for them and secretly supplying them with universally-condemned cluster bombs.

Harper ignores such compromising complexities, and instead sends Canadian troops to participate in fighting against ISIS, the insurrection whose belief system is most closely allied with the rigid theocratic regime in Saudi Arabia, at the same time disdaining an alliance with more moderate and flexible Muslim countries or populations and working for reconciliation.

Canada's trading partner Saudi Arabia, by the way, along with several other smaller wealthy Arab nations like Qatar and Bahrain, has taken zero Syrian refugees, resulting in outrage on social media from predominantly Muslim countries.

What a mess Canada's Prime Minister has created.

First, he gets caught out with a harsh and inhumane refugee policy, right in the middle of the biggest efflux of refugees since WW II.

Then he gets all balled up in Middle Eastern politics, siding with the US and other nations against one Sunni Muslim regime (ISIS) that is affiliated to one (Saudi Arabia – to whom Canada is eagerly selling weapons) while ignoring another different Muslim regime (the Alawite government of Bashar al-Assad) which is fighting a war with its own mainly Sunni Muslim citizenry.

But that's not all.

Global climate change, it turns out, helped make all this happen

Now Stephen Harper is pinioned, face-to-face, by one of his least favourite things: the stark, unavoidable reality of global warming.

The scientific community has determined that the Syrian civil war began in large measure because of the effects of climate change.

Prior to the civil war, the Syrian state was considered one of the most stable in the Middle East. The rule of the Assad family was iron-fisted, but religious beliefs of all kinds were tolerated, and the country was politically resistant, or so it seemed, to the Arab Spring.

But Syria had borne the brunt of a truly “severe weather event" from 2006 to 2011. For five years the country experienced the worst drought in the country’s recorded history. It destroyed the agricultural base of the economy, pushed up food prices, increased levels of poverty, and caused mass migration to cities. When protests against government inaction erupted, the paranoid Assad regime responded with violence and suppression.

The rest, sad to say, is history.

As one climate scientist said, the searing drought “helped kick things over the threshold into open conflict.”

On the basis of a likely long-term shift to a hotter, drier climate that will exert constant pressure on societal stability, the country and region are destined to be enveloped in chronic conflict – unless, of course, there are mitigating circumstances, leading away from the sectarian violence and enormous disparities in wealth and political power that characterize the region today.

But that has never been one of Stephen Harper's concerns.

Bottom line: we need a leader who gets foreign policy

If Canada is to become, once again, a leader in international relations, then Stephen Harper has to voluntarily take a crash course in world diplomacy and peace-making, centred on the Middle East, and another in the science of climate change.

Either that, or the country will have to find a new leader who understands these issues better.

On the available evidence, I believe that Canadians will have to choose the second option.

Please remember to vote on October 19.