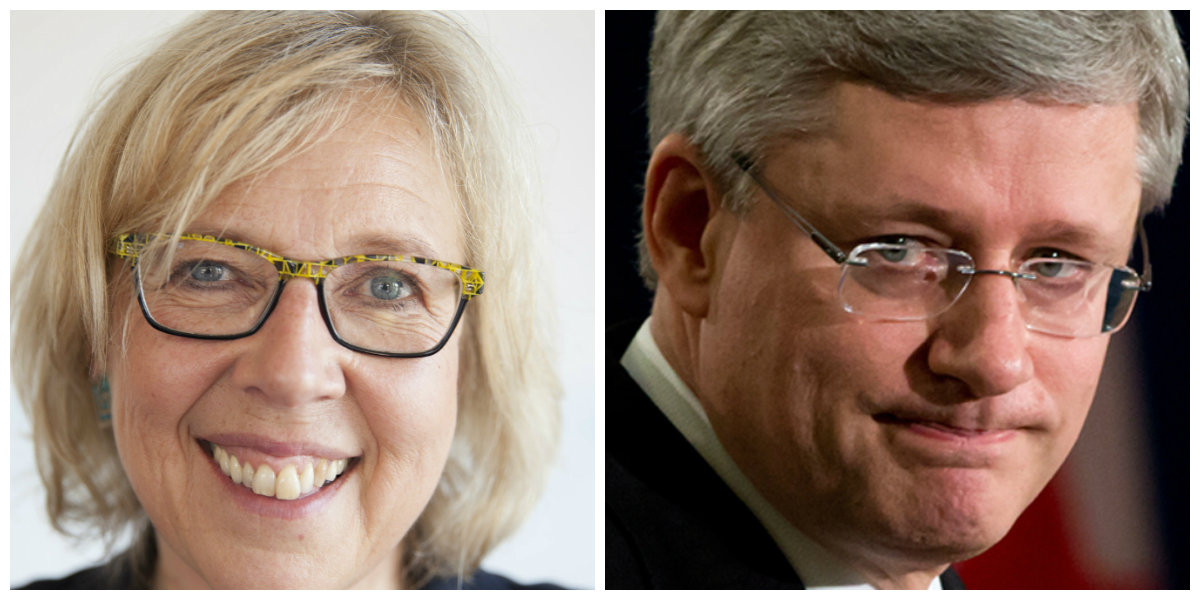 No, he’s not afraid that she’ll leave her podium and come over and whack him.

Harper's afraid – he knows – that if he were to engage in a fair debate against Green Party leader Elizabeth May, in public with millions of Canadians watching, he’d lose.

First of all, she knows climate change cold (and I use the word advisedly), and knows how critically important it is. May’s been aware of the problem since scientists started talking about it 30 years ago—just like Peter Kent, Stephen Harper’s long-ago Minister of Environment, who actually produced a documentary on the subject in 1984 for the prime minister’s nemesis, the CBC.

The difference between Elizabeth May and Peter Kent is that she never gave up her principles, and never tried to pretend later on that she didn’t know anything about it.

The difference between Elizabeth May and Stephen Harper is that she doesn’t have ideological and possibly religious reasons to deny its existence.

2. May is a far more skilled presenter than Harper

The second reason Stephen Harper is avoiding debating Elizabeth May is that she’s a more fluid and relaxed debater. She is a more accessible, convincing and comfortable presenter of ideas in public. In particular, she spontaneously and openly celebrates who and what she loves and appreciates, and she can muster an astonishing array of facts and details about subjects that the prime minister wishes to ignore and suppress, such as how government works, and how the economy and the environment are linked together.

Stephen Harper has a compendious mind, and has been called “the nerd who came from nowhere." But in front of a group of unselected or unsympathetic listeners, he can stiffen and retreat into silence. When others are watching, especially people he doesn’t know well (or who haven't been pre-screened by his party), Harper has become rigidly fixated on presenting the only image he's comfortable with – “bland” – a cover for the fact that his policies are relentlessly and coldly focused on the elimination of anyone or anything he wants out of the way.

Elizabeth May can confidently laugh out loud, make a self-effacing joke, or stray from a presentation into an illuminating anecdote, but Stephen Harper rarely does (he used to, mostly in private). It so rarely happens now that when Harper appears to go off script or speak with emotion, it's national news.

Face to face, this difference is obvious, and Stephen Harper undoubtedly knows the contrast would make him look stodgy and cold. He’s cultivated this persona for so long, it’s become his trademark. If Canadians want change, it’s clear that one change would be towards warmth and compassion, inclusiveness and cooperation – qualities that have been mostly absent from Stephen Harper the politician, but which are prominently displayed in Elizabeth May.

3. She knows Harper is trying to subvert Canada’s democratic institutions

The third possible reason why Stephen Harper doesn’t want to debate Elizabeth May is that she’s got his number.

Just as he’s been avoiding or ignoring her in public and in private, and excluding her from any and all public venues he possibly can, she’s been watching him, reading in detail what he reveals in legislation and in parliamentary debate and public pronouncements. She knows he’s trying to hollow out Canadian democracy.

Her autobiographical volume Who We Are (Greystone Books, 2014) makes clear, in fact, that the appearance of the anti-democratic Harper freight train, riding roughshod over the principles of parliamentary democracy both out in the open and behind the scenes, was the reason she ran for political office. Among current political leaders, Elizabeth May is the best equipped to take down Stephen Harper’s record, piece by piece – the omnibus bills (which she read and critiqued), the deception in the so-called “Fair Elections Act” and the horrendous invasion of Canadian’s civil liberties in Bill C-51 (which she also read and critiqued in detail).

If Stephen Harper and Elizabeth May were to debate, one-on-one, in public, the prime minister’s incremental destruction of Canada’s democracy would be laid bare, for all to see.

4. May is every bit as smart as Harper, if not more so

Finally, Stephen Harper doesn’t want to debate Elizabeth May because she’s arguably brighter and more quick-minded than he is.

He was a policy wonk as a young man. Accounts of his past say he excelled in his studies, and endlessly discussed with friends his libertarian theories and beliefs. He wanted to eventually become an academic. His father and two brothers are accountants and are notoriously private.

She’s a lawyer who was born into a family of social and environmental advocates, whose childhood was filled with a combination of remarkably diverse learning experiences and much actual real world advocacy, beginning in her teens – against spruce budworm spraying with the highly toxic 2,4,5-T in Nova Scotia, against the pollution of the Sydney Tar Ponds (she fasted in protest and compelled concessions from government), and for the protection of exquisite ecosystems in B.C. (she was successful in that, too).

If you want to know how good she has always been at grasping facts and presenting complex argumentation with a cool head, watch this impressive CBC archival footage of Elizabeth May, then a 23-year-old waitress working in her parents’ restaurant, resisting the pro-pesticide-spraying power structure of corporate spokespeople, government representatives and conflicted scientists with superbly marshalled facts.

Elizabeth May’s deeply informed, steel-trap mind has a tighter grip than Harper's on what the majority of Canadians – especially young Canadians – really want in their lives: seasoned and robust and diverse public debate, and action oriented towards our common future.

And she has a depth of tangible integrity that outstrips Canada’s prime minister by a country mile.

Stephen Harper is a shrewd introvert filled with concepts and a strong ideological bent, who avoided the limelight until he found that he was irresistibly drawn to manipulating the power structures that would enable him to implement those concepts and that ideology.

Elizabeth May is a seasoned, deeply intelligent, ethically driven extrovert with a life-long history of confronting large and powerful political dragons with solid documentation and slaying them dead.

Where Stephen Harper resorts constantly to talking points and phrases like “let me be perfectly clear” to cover his darker intentions (and compels Conservative MPs to do likewise ) Elizabeth May can list off, in a comprehensible way, a range of verifiable data that directly challenge the PM's or other naysayers' claims. She also leads a party that is markedly more tolerant of differences of opinion with its own ranks.

Elizabeth May is critical to the integrity of the debates.

The vast majority of Canadians want Elizabeth May included in all election debates.

A fearful Stephen Harper does not.

While he grips the reins of power tightly in his hands, and his alone, Canadians will be shut out, just like Elizabeth May.

Unless we collectively voice our disapproval.

In doing so, we may end up compelling Canada’s current political leader to rue his decision, and perhaps others.

The upcoming Globe and Mail election debate is September 17, and as I wrote about before, May is not going to have a chance to debate Harper.