By The Canadian Press | News | September 18th 2015
#17 of 32 articles from the Special Report: Assessing Stephen Harper 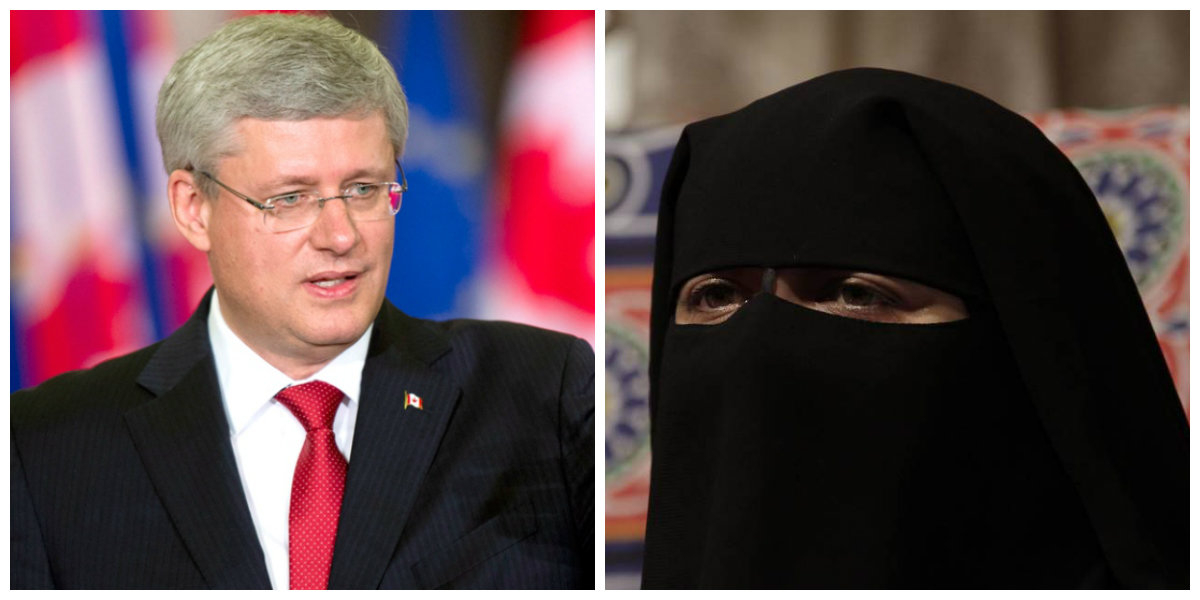 OTTAWA — The Conservatives are seeking to throw up another roadblock to a Muslim woman's quest to be able to vote in October.

The government announced Friday it will seek a stay of a Federal Court of Appeal decision this week that would have allowed Zunera Ishaq to wear a niqab while swearing the oath of citizenship.

Current regulations ban wearing of face veils at citizenship ceremonies, but Ishaq challenged the rule, won in Federal Court and again this week, when a three-judge appeal panel upheld that decision in a quick ruling from the bench.

"The reason why now is because we had a court ruling that we're responding to expeditiously," Prime Minister Stephen Harper said Friday at a campaign event in Calgary.

"Look, when someone joins the Canadian family, there are times in our open, tolerant, pluralistic society that as part of our interactions with each other we reveal our identity through revealing our face. When you join the Canadian family in a public citizenship ceremony it is essential that that is a time when you reveal yourselves to Canadians and that is something widely supported by Canadians."

The stay could be granted by either the appeal court or the top court. One of Ishaq's lawyers said Friday they intend to ask the government which it will be and how soon, as they will fight the request.

"We want to argue the stay as soon as possible, so if the court denies the stay, my client can still get her citizenship and vote," Lorne Waldman said in an interview.

If the stay is granted, Ishaq is unlikely to have the opportunity to become a citizen before the Oct. 19 vote. The government has until mid-November to file the leave application to the Supreme Court and the justices could take as long as three months to consider it.

Both the Liberals and the NDP said they'd let the matter drop if they form government.

NDP Leader Tom Mulcair noted that the courts have set the blame squarely on the current government's shoulders for imposing an unlawful rule.

"We will respect the courts," he told reporters in Regina.

Giving Ishaq the chance to vote was what prompted the swift ruling from the appeal court on Tuesday.

"We believe that it is in the interests of justice that we not delay in issuing our decision through the examination of an unnecessary issue so as to hopefully leave open the possibility for the respondent to obtain citizenship in time to vote in the upcoming federal election," Justice Mary Gleason wrote in the decision.

Liberal Leader Justin Trudeau said the move smacked of a deliberate attempt by the government to deny someone a vote that would likely be cast against them.

"That is completely irresponsible," he told reporters in Montreal Friday.

"Canada defends the rights of minorities, we respect people's rights. That's what we will always do. This government quite frankly is demonstrating time and time again its lack of respect for people's rights and freedoms."

In order for Ishaq to obtain citizenship, the Citizenship and Immigration Department must formally invite her to a ceremony. Several are scheduled in Ontario between now and Oct. 19.

The Conservatives have also said that if re-elected, they would, in their first 100 days, re-introduce and adopt legislation banning face coverings during citizenship oaths. A bill to do that was introduced in the waning days of the last Parliament.

The niqab ban was inspired in part by Quebec's experience with the so-called charter of values, a document introduced by the Parti Quebecois government which banned the display of overtly religious symbols by people in the public sector.

While the charter was extensively criticized and partly blamed for the defeat of the PQ government in 2014, the issue of the niqab still resonates in the province, where the Conservatives hope to increase their seat count.

That's likely why it was left to Denis Lebel, a Conservative candidate in Quebec, to announce the plans to seek a stay, rather than Justice Minister Peter MacKay, who is not running for re-election.

Note to readers: This is a corrected story. A previous version said the court of appeal decision was Wednesday. It was Tuesday. Updated 14:19 EDT