Canadians get ripped off at the pumps 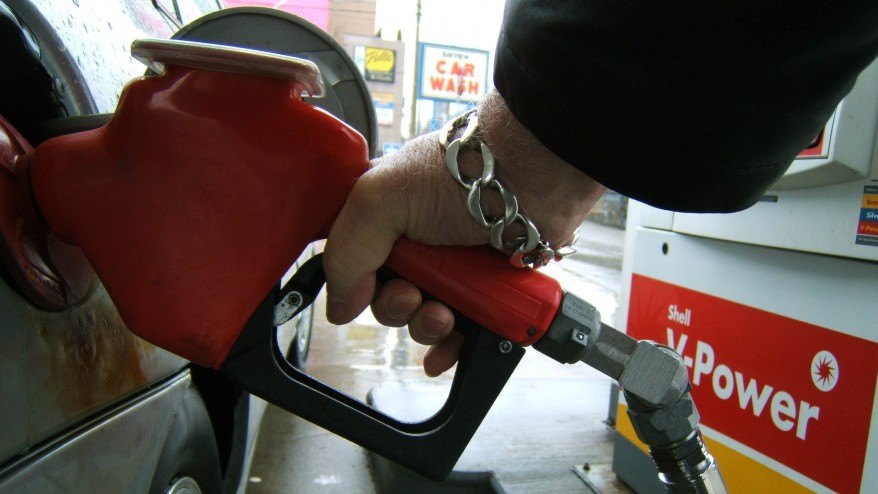 The Suncor Refinery outside of Fort McMurray with the Syncrude Refinery visible in the background. (Credit: Colin O'Connor, Greenpeace)..
Previous story
Next story

A huge disconnect exists between the price of crude oil and gasoline even though crude is the major component in a refiner’s cost. Big Oil is taking advantage of Canadians at the pumps.

The Harper government seems worried voters might figure it out. When the election was called, Natural Resources Canada (NRCan) stopped producing the Fuel Focus Report—its bi-weekly window on economic drivers influencing gasoline prices “intended to provide Canadians with regular information on the various aspects of the gasoline market in Canada.”

Obvious price gouging began to emerge in early March. The price of crude fell, but prices at the pump increased. Before Fuel Focus Report data was suspended in July, it showed Canadian refining and marketing margins hitting an all time high of 38.6 cents a litre (see figure 3 in this report).

In Vancouver, it was 48.1 cents and in Toronto, 43.1. With further research, I determined that during August the upward trend continued, abating slightly in September— but you can’t see that in Fuel Focus.

At Barclay’s Energy Conference in New York last week, CEO, Steve Williams said, “We have too much cash on our balance sheet. We have cash in excess of 5 billion dollars… we have 12 billion dollars in liquidity. We have been generating more cash than we anticipated.” 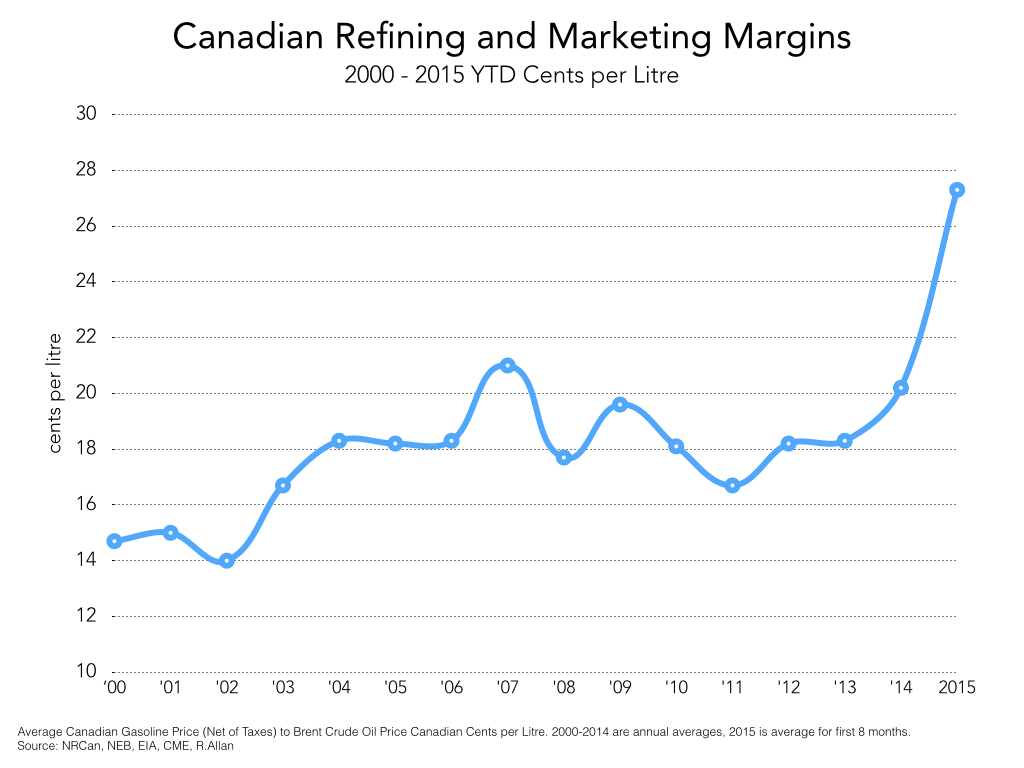 Big Oil is taking money from our pockets. Had more of the benefit from lower-priced crude been passed on to consumers and businesses, the Canadian economy would have received a positive offset.

When refiners hoard benefits instead, money is locked away in corporate treasuries or distributed to primarily non-Canadian shareholders. Dividends sustained by revenue streams from abnormally high margins are a net drain from the Canadian economy.

According to Bloomberg Business data, only forty percent of Suncor’s shares are held in Canada, while companies like Husky and Imperial Oil have fewer than 10 percent, with Shell, Chevron and Valero below three percent.

Big Oil is not only taking money out of our pockets. They are robbing the Canadian economy of a much-needed boost.

When gasoline prices respond to a declining cost of crude—which is the way markets are supposed to work—lower production costs are passed through to consumers and business in the form of lower gasoline, diesel, jet fuel, heating oil and petrochemical product prices.

Lower transportation and energy costs have a significant impact on consumer spending and non-oil sector business performance. This helps to generate employment in non-oil sector activity.

What’s fascinating is that as we entered 2015, industry observers expected the decline in crude prices would be passed through to consumers and business in a more significant way than actual figures indicate. It was thought the market would functionally respond to lower input costs.

Deputy Governor of the Bank of Canada, Rhys Mendes, explained to the Standing Committee on Finance in March that “the rapid fall in oil prices is going to have both positive and negative effects on different sectors of the Canadian economy… cheaper oil means more money in the pockets of individual consumers. They can either spend the additional disposable income or save it, and these decisions will matter for economic growth. Lower costs for firms that use oil as an input may lead to a rise in profits, output, and investment in non-oil related sectors of the economy.”

RBC's financial VP and chief economist, Craig Wright, explained to the Committee that although gas prices tend to go down more slowly than they go up, based on prices moving into 2015, he calculated the offset from gas savings alone would work out “to about $11 billion equivalent tax cut for the Canadian consumers. That’s going to help.”

But lower prices have not materialized to the degree expected. Ten cents a litre in excessive margins at the pumps is a lot of money. So far, in September, average margins are over 30 cents a litre. If this continues, excess gasoline pricing will mean a loss of $5 billion in benefits to Canadian consumers and non-oil businesses by year end.

When the disconnect materialized last spring, instead of taking action, the Harper government produced an industry-enabling rationale. Natural Resources Canada shored up refiners’ excessive pricing practices by suggesting Canadian-made petroleum products are sold in US dollars, but Canadians purchase gasoline with Canadian dollars.

Petroleum products produced in Canadian refineries with Canadian employees for distribution to Canadian retail outlets across Canada are not sold in US dollars.

Canada is a net exporter of petroleum products—we produce more gasoline than we need—but Natural Resources Canada would have us believe we import every litre of gasoline we consume from the United States. That’s how they justify U.S. prices inflated to Canadian dollars at the going exchange rate.

The Harper government is worried Canadians will figure out the source of the gasoline pricing disconnect. NRCan staff stopped producing the bi-weekly Fuel Focus when the writ was dropped. Its latest issue, number thirteen, was released July 24.

The department’s website doesn’t indicate that the publication has been halted. I had to contact NRCan directly to find out. I was informed the Fuel Focus Report will resume after October 19. Repeated requests for an explanation have gone unanswered.

Fuel Focus is an important window on crude oil, marketing and refining margins, taxes and gasoline prices in Canada. Interrupting the creation of the data base while an election is on is like telling the Department of Finance to stop releasing information on Canada’s fiscal position.

I had a conference call scheduled September 8, 2015 with NRCan technical staff to arrange access to the missing data, discuss bloated margins and the crude-cost-to-gasoline-price disconnect. The conference call did not proceed. Staff appear to have been muzzled.

Gasoline prices in Canada are disconnected from the costs of production. They are not driven by cost plus a reasonable return for capital invested. They are driven by what consumers are willing to pay. Canadians are deliberately being conditioned into accepting a new level of unfair margins—margins that not only harm individuals and non-oil businesses, but the health of the Canadian macro-economy.

When crude prices hovered around $100 a barrel we accepted pump prices of around $1.30 a litre. Refiners are relying on that price point to ratchet up their price-gouging behaviour. Any price lower than last year’s high feels like an improvement.

Our willingness to pay is conditioned by what we paid in the past, but It’s also forged by a belief that the government is watching out for us to make sure it’s fair.

Instead, the Harper government is an active advocate rationalizing Big Oil’s excess. As Big Oil’s squeeze on Canadians tightens, Ottawa cuts off the flow of facts, hoping Canadians won’t notice.