How to vote Harper out 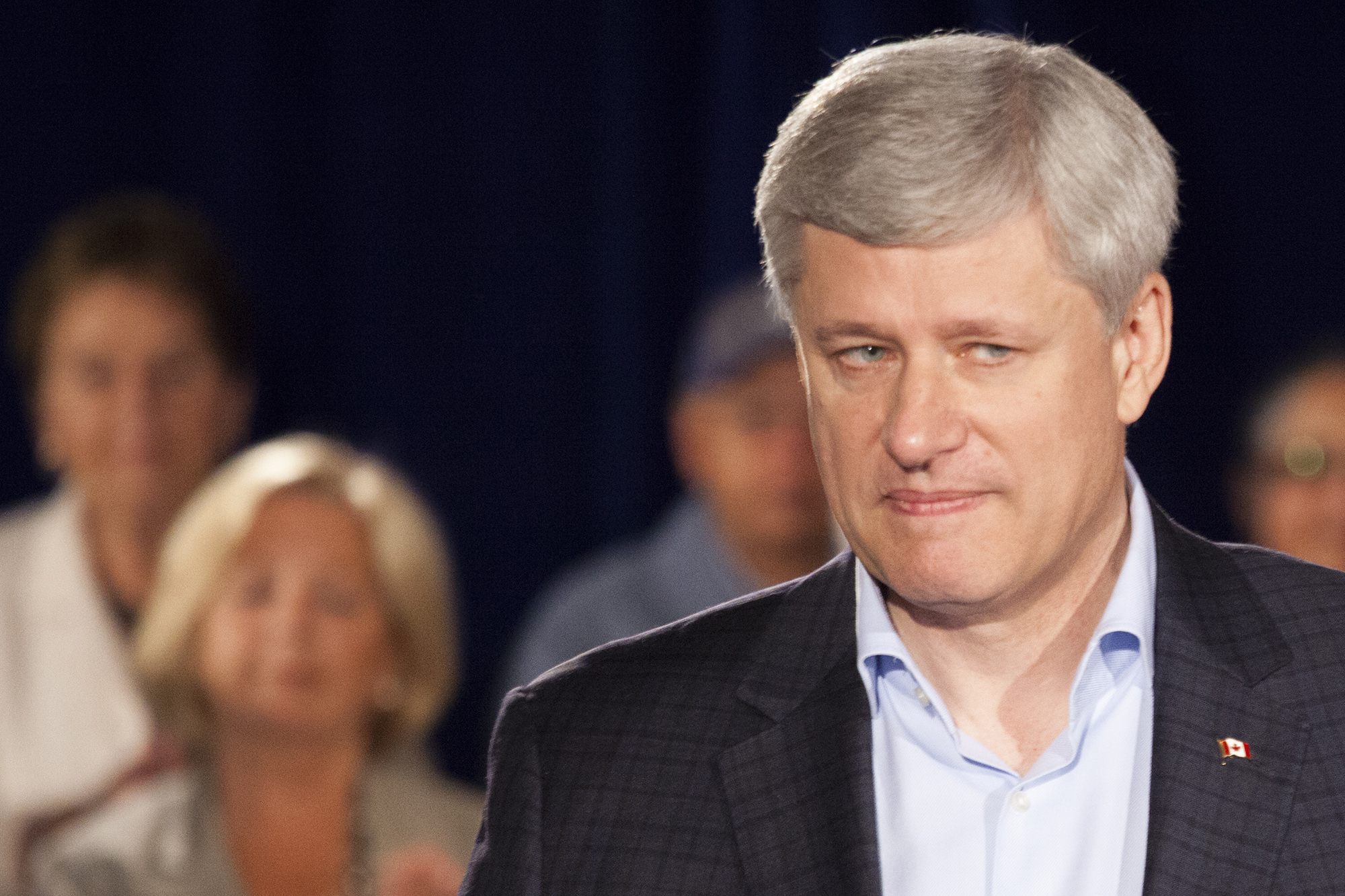 On Oct. 19, an embattled Stephen Harper still plans on mustering a minority win, according to polls, despite two-thirds of Canadians wanting to see him gone.

The prime minister's base is notoriously organized and ready to vote for Harper's fourth straight term, so he has a good shot.

Given the damage he's already done to Canada's democracy, four more years of Stephen Harper would be disastrous.

It is becoming clear that the majority of Canadians must act, and act together, with the same focus and organization as Harper's "base."

Otherwise, we will be forced to endure more damage to this country's cherished democratic institutions.

Battered by the Duffy affair, an onslaught of omnibus bills, the notorious Bill C-51, suppression of scientists and destruction of information, and the ever-present threat of electoral fraud, our country will suffer from an ever deeper democratic deficit.

Many Canadians realize this at a deep visceral level.

They understand the ideologically-driven incrementalism of Prime Minister Stephen Harper, and know that he will continue to invade cherished legislative and regulatory spaces and trash the values they embody.

We have to vote strategically, one last time, in order to salvage the country while it's still recognizable.

That means we have to put our deepest political wishes in our back pocket, and vote for the progressive party most likely to defeat the Conservative candidate in each riding, even if that's not our first choice. If we succeed — and there's no reason to believe we won't—then we'll be able to vote with our heads and with our hearts in all future elections.

Fair Vote Canada has suggested we think of this as Canada's "Last Unfair Election."

Because so many people now understand the unique threat Harper poses to Canada’s future, organizations have sprung up around the country to facilitate strategic voting, and existing groups have adapted their regular work to help it along in practical ways.

Nationally, the organization Leadnow is working on a well-designed strategy to defeat Stephen Harper in 12 key ridings, and is active on the ground in 70 others. If you're in one of these ridings, you'll be able to find out which candidate is best suited to defeat the Conservative.

Leadnow is also reaching out to help people in every riding in the country use their strategy, through crowd-funding and other means.

For those who just want to see who to vote for in key ridings, the website Strategic Voting lays it out with stark simplicity, by province. If you're in Ajax, vote Liberal, but if you're in Kenora, vote NDP.

And keep checking, because information is updated regularly. And you'll have no direct control over the timing of their assessments.

In B.C., the Dogwood initiative is working on eight ridings with a detailed and sophisticated strategy.

And the new GreenPAC organization is winnowing out the crop of candidates to find those with environmentally sound track records – the overwhelming majority of whom are non-Conservatives.

The CBC News Poll Tracker website, run by veteran political analyst Eric Grenier, will give you a rough overview of what’s happening in opinion polls across the country. Grenier's own website attempts to give a very rough breakdown of support for each party in all 338 individual ridings.

Organizations like the Assembly of First Nations, the Council of Canadians and the superb and lively youth-oriented Facebook group Harpoon – among many others – are all encouraging their constituencies to vote precisely because — as former host of CBC’s Fifth Estate, Linden MacIntyre, says in this YouTube clip — “they don’t want you to.”

Widespread, collaborative, local grassroots actions will ultimately be the most powerful tool to protect Canada’s democracy. That’s because there’s no way the government, or anyone else, can influence or control such activity.

As noted above, voting in Canada is still hamstrung by the medieval British “first-past-the-post” system, in which, no matter how many political parties, candidates or issues there are in a given election, only one candidate will win, and potentially by as little as a single vote.

In recent times, Stephen Harper has repeatedly denigrated and dismissed proportional voting, counting as he does on a narrowly-situated political base in certain parts of the country, and on his vast, corporate-funded war chest to carry him to victory.

This is actually a complete flip-flop for the opportunistic Harper, who, when wandering the political wilderness in 1997 was arguing for proportional representation. In an essay co-authored with his mentor and one-time chief of staff, University of Calgary political scientist Tom Flanagan, Harper actually wrote:

Many of Canada’s problems stem from a winner-take-all style of politics that allows governments in Ottawa to impose measures abhorred by large areas of the country.

There is a certain breathtakingly irony in this pronouncement, coming from today's most ardent supporter of the first-past-the-post system— and yet another example of Stephen Harper's willingness to play fast and loose with the truth if it seems to offer access to power.

So what do we do to unseat him from the position he's occupied for far too long?

Step #1: cast your ballot only for a party that will bring in proportional voting

Vote for one of the two parties (NDP, Green) that are committed to bringing in this electoral system – which is by the way, used by democracies around the world, including Germany, Belgium, Sweden, Japan, Israel and many others. Or vote for the Liberal Party, which has committed to getting rid of the first-past-the-post system.

The first-past-the-post system is mainly limited to nations that were once British colonies – Canada, India and a handful of small countries – and of course the U.K. itself.

By voting for a proportional system, you’ll be casting a vote to end the narrow sectarian power politics that are (now) so beloved of Prime Minister Harper and his government.

And 2015 can be the last year we Canadians have to deal with the absurd FPTP system.

Step #2: order a poll to find out which party leads the opposition to the Conservatives in your riding, and vote for that party

Polls are imperfect. But a proper, statistically accurate survey of attitudes and intentions gives you a far better idea of what’s happening in your riding than guesswork, opinions from friends and even political pundits.

You can work with LeadNow if you choose. Or, if you prefer, you can form a group of like-minded citizens in your riding, or join such a group if it already exists. There are lots of them everywhere; if none exists that you know of, advertise on Facebook or Twitter – you’ll be delighted at how many enthusiastic replies you get, and how quickly they come in.

Each person then contributes a few dollars to a collective fund. The kind of simple poll you'll need typically costs about $1,100 plus tax — say $1250 altogether – which means 25 people put up $50, or 50 people put up $25, and voilà! you’ve got yourselves a poll.

Here is a suggested set of the simple questions your poll should include:

Many people are suspicious of telephone opinion polls.

Therefore you might consider telling your polling company that would like his or her staff to inform the people they call that you – the sponsors of the poll – are a group of citizens in their riding who have no corporate, political party or government funding, who are paying for the poll with small personal donations — just so you can get a better idea about what is happening in your riding. You could also have them add that the results will be widely publicized through the media for anyone to use as they see fit (because that’s exactly what you'll be doing!).

You should time the execution of the poll so results are in your hands about one week prior to the election on October 19 (you want it late enough to give you fairly accurate results, but early enough that you can communicate the results far and wide).

Step #3: publicize the results of the poll everywhere in your riding

Once the poll results are available, the critical next step is to distribute them to as many voters as possible in your riding.

That means that starting right now, you need to prepare a distribution system and have it ready to go as soon as results are available.

This should include a comprehensive Internet fan-out – including Internet-based paths like Facebook, Twitter, listservs, and website postings. It should also include letters to the editor and/or op-eds in local newspapers, most of which have digital versions that will post news right away and are often read by more people than their paper or hard-copy versions.

Step #4: specifically encourage the transfer of votes from the trailing parties to the one most likely to beat the Conservatives

One of the most unpleasant parts of “first-past-the-post” voting is this “strategic voting.”

Once again, strategic voting means you vote for a party that is your second or even third choice, but only because the party you like best is unlikely to win in your riding. You do it to block victory for the party you like the least.

In this case, armed with the results of your poll, encourage every person and organization receiving these results to shift their vote – if they can bring themselves to do so – to the party most likely to defeat Harper.

This is being done, remember, on an impartial basis, and is designed to increase the likelihood of defeating the local Harper candidate (even if he or she is a well-respected and popular person).

It does not represent a vote against any other party, but rather a vote in favour of restoring democracy to Canadian politics.

Don't forget to accompany the results with a request that the recipient forward them to everyone they know. Make it clear that this is the best way to defeat the Harper government, and if that happens, this is the last time they’ll have to hold their noses and vote strategically.

And if you have any doubts about this approach, then just imagine Harper or his hand-picked replacement subverting more of the country's democratic processes and representing Canada on the world stage for another four years.

Then think of that not happening.

CORRECTION September 21, 4:03 p.m.: a previous version of the article suggested the Liberal Party also promised to change to proportional representation. This has been corrected.