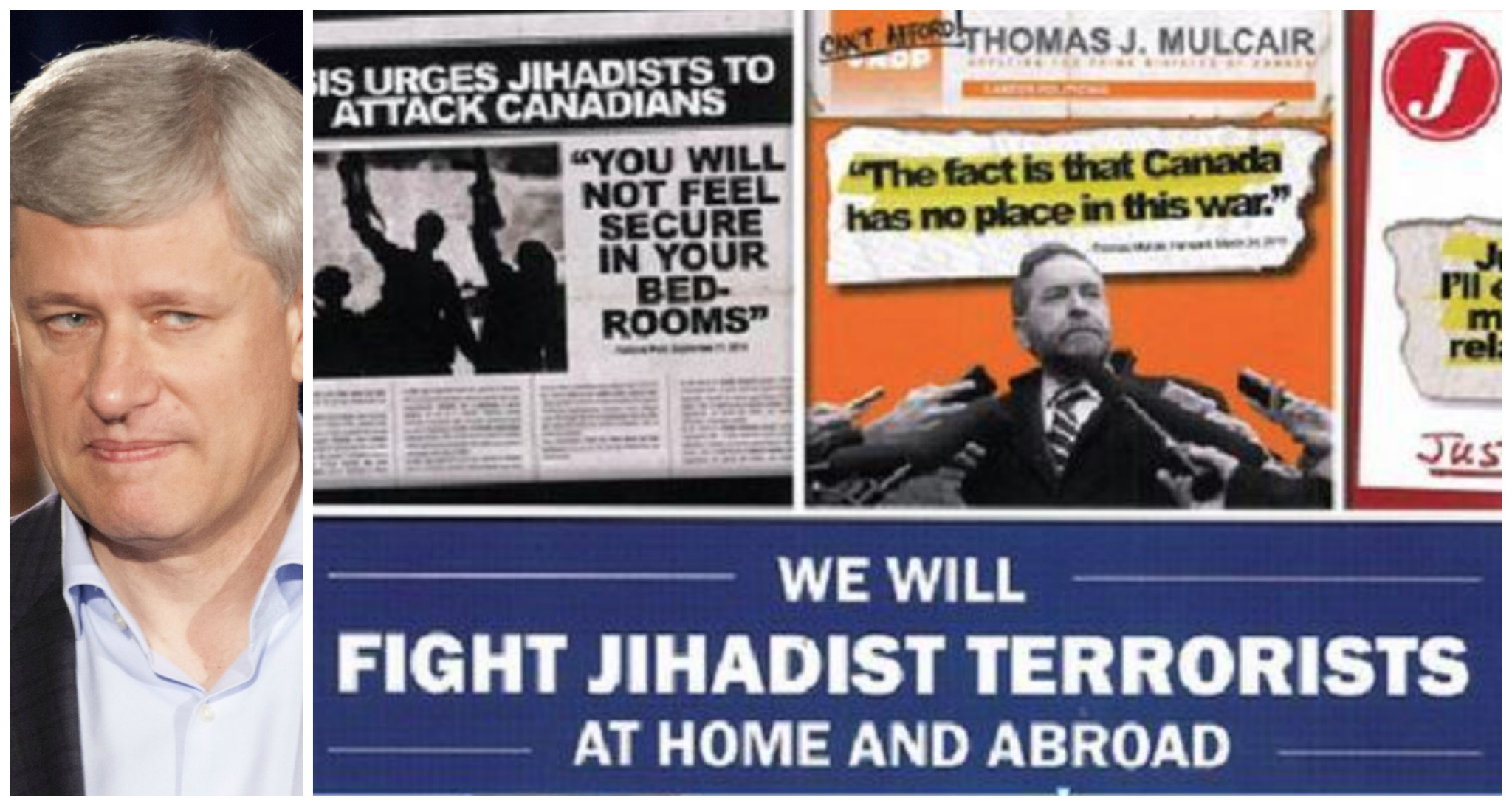 The former Surrey mayor's tone-deaf fear-mongering is an insult to her community, now crouching under a hail of gangland gunfire. Three weeks ago an elderly grandfather in a neighbouring municipality was shot dead in his yard by a stray bullet from a drive-by shooting. But nobody should forget that the terrorists are coming for them.

Meanwhile, over in Mississauga, Mayor Bonnie Crombie hammered the local opponent of a mosque for his "hate-mongering" website which warned of an increase in sexual assaults and rape, and for claiming the house of worship would be "out of place in Canada."

That's a whole lotta mongering, but it's not the half of it.

Things are getting really ugly out there in this election, and they're probably about to get worse.

While the commotion over Stephen Harper’s use of “old stock Canadians” was the enduring take-away of last week’s leadership debate in Calgary, the (largely white) pundit class have decided to wave off any penalty to the PM.

Well, not so fast, Pilgrim.

If the modern Conservative Party has a heartland, it’s not on Toronto’s Bay Street or The Bridle Path so familiar to Ontario pundits, but in small-town Alberta. It’s where the Reform Party, which now wholly dominates the Conservative Party, took root.

It was my childhood home.

“The past is never dead,” wrote William Faulkner. “It’s not even past.”

Racial politics have a storied history in Alberta, where the anti-Semitic views of C.H. Douglas, co-founder of the formerly dominant Social Credit Party flourished and propagated.

They were so widely accepted that the publisher of our local newspaper was a proud Holocaust denier who routinely extolled the tenets of anti-Semitism decades after such talk was weeded out of polite society anywhere else in Canada. You'd think it would be nearly impossible for such a man—a lawyer no less—to be elected MLA for the Progressive Conservative Party in the 1980's, but it happened in Alberta.

This was the kind of thing that, decades earlier, bedeviled Alberta premiers. Preston Manning’s father, Ernest Manning, worked hard during his 25 years at the helm of his Social Credit government to purge it.

Another enterprising figure of the day, Jim Keegstra, went on to national notoriety for teaching anti-Semitism and Holocaust denial in high school just a few miles away in Eckville. According to the Supreme Court of Canada,

Mr. Keegstra's teachings attributed various evil qualities to Jews. He described Jews to his pupils as "treacherous," "subversive," "sadistic," "money-loving," "power hungry" and "child killers." He taught his classes that Jewish people seek to destroy Christianity and are responsible for depressions, anarchy, chaos, wars and revolution. According to Mr. Keegstra, Jews "created the Holocaust to gain sympathy" and, in contrast to the open and honest Christians, were said to be deceptive, secretive and inherently evil.

Jim Keegstra was not an outlier or fringe character. His views had a long provenance in the region, and were no secret to the Eckvillians who elected Keegstra mayor. Here's Ernst Zundel meeting with Keegstra's lawyer Doug Christie in Eckville on the eve of the famous hate speech trial. Before the trial, nobody really talked about this stuff, mainly because it didn’t haul much water in a town where no one had met any Jews. But everybody knew about it.

Anti-Semitism had somehow merged with Alberta's fervent anti-Communism and stuck there. Eventually it faded away for a host of reasons, including the political priorities of Alberta's favourite son.

About a hundred miles in the other direction from Eckville was Taber, Alberta, where many Canadians of Japanese heritage were interned during World War II. We had names for the Japanese, too, in our little town.

In fact, just as in many parts of small-town and suburban Canada, there were names for anybody different. Pakistanis, Chinese, South Asian Indians, Jews. First Nations, Vietnamese and people of African heritage.

You know what they were called. Not by everyone or even most. But enough to make the point.

And you also know that, no matter how many generations went by, minorities weren’t ever called “old stock Canadians.”

They certainly weren't old stock enough to wear a turban with the RCMP uniform. The Alberta-based Reform Party, Harper's party of choice at the time, passed a resolution opposing such a threat to Canadian values.

The one person who can’t plead ignorance of perilous racial attitudes in the Conservative base is Preston Manning’s protegé, Stephen Harper. In fact, the politics of fear and racial division are just tools in his toolkit.

What's remarkable is how successfully he's kept those tools out of sight from the minority communities that he and Jason Kenney have so carefully developed.

But that may be about to change. The recent arrival in Conservative campaign ranks of one Lynton Crosby of Australia is more than a little coincidental. In 2005 The Economist identified Crosby as the political fixer who brought immigration oriented dog-whistle politics to the UK, where it served the Conservative Party very well.

Crosby is also credited with the "dead cat strategy," as described by another client, London Mayor Boris Johnson:

"Let us suppose you are losing an argument. The facts are overwhelmingly against you, and the more people focus on the reality the worse it is for you... Your best bet in these circumstances is to perform a manoeuvre that a great campaigner describes as “throwing a dead cat on the table, mate”.

That is because there is one thing that is absolutely certain about throwing a dead cat on the dining room table...says my Australian friend, is that everyone will shout “Jeez, mate, there’s a dead cat on the table!”; in other words they will be talking about the dead cat, the thing you want them to talk about, and they will not be talking about the issue that has been causing you so much grief.

Johnson's "Australian friend," of course, is Stephen Harper's new advisor, Lynton Crosby. If there was ever a moment when Stephen Harper desperately needed to change the narrative, it was when Canada was implicated in the death of wee little Alan Kurdi off the Turkish coast. It takes real political skill to turn such a moment into the chance to sow fear of refugees.

Harper’s use of the phrase “old stock” is probably something less than a dog-whistle and more of a tell. His subject was immigration and refugee health care policy, which he fibbed to Canadians as having been withdrawn from “bogus” refugee claimants. (The Federal Court of Canada found that many legitimate refugee claimants have been stripped of health care, including pregnant women and small infants).

In the same debate, in a manner calculated to stoke fear, Harper fabricated the claim that his opponents propose to bring in hundreds of thousands of refugees with no security checks.

And of course there is the question of niqabs at citizenship ceremonies. Dress code at such occasions could only demand the attention of the Prime Minister of Canada because race-baiting is such a first-rate political opportunity.

Then there's Bill C-24, described by the Globe and Mail as ugly and xenophobic. The Harper government granted itself the power to strip certain Canadians of their citizenship. Mohammed Fahmy is one example of a Canadian at risk.

Over and over again Stephen Harper sifts and filters and grades Canadians, and we all know who comes last. Naturally such a leader has a mental image of who rates as “Grade A Premium Select” Canadian. The “old stock” comment is of a piece with all his other immigration and refugee policies.

Leadership comes with the responsibility to calm, unite and reassure citizens, not to incite panic and suspicion amongst neighbours.

Which brings us back to the Conservative heartland, and why nobody should give the party a pass on their hysterical rhetoric.

Social media coming out of the Conservative heartland has suddenly turned shockingly inflammatory. Facebook and Twitter are now plastered with panic and ugly vitriol over refugees and niqabs. It happened so fast that some might think it was orchestrated. The posts appeared right after pressure exploded for Canada to respond to the Syrian crisis by accepting more refugees.

It’s as if we've traveled back in time, as if we never left the hateful anti-Semitism behind, but just switched scapegoats. The language parallels are remarkable. Stephen Harper knew exactly what he was doing with his wild claims about Canadian safety and security as we're over-run by Syrian refugees. Table, meet dead cat.

The question is whether the politics of fear will cost Harper in those crucial suburban Toronto and Vancouver ridings that he absolutely must win to retain power. Both regions have large minority populations. While it's anyone’s guess what the voter impact will be, it's notable that two days after last Thursday's debate Harper announced a new citizenship award for immigrants.

And now, with Watts' revolting brochure, comes the campaign of terror.

But credit where it’s due.

Nobody's talking about that lifeless little boy on the beach anymore.

Editor's note: This story was substantially updated on September 24.