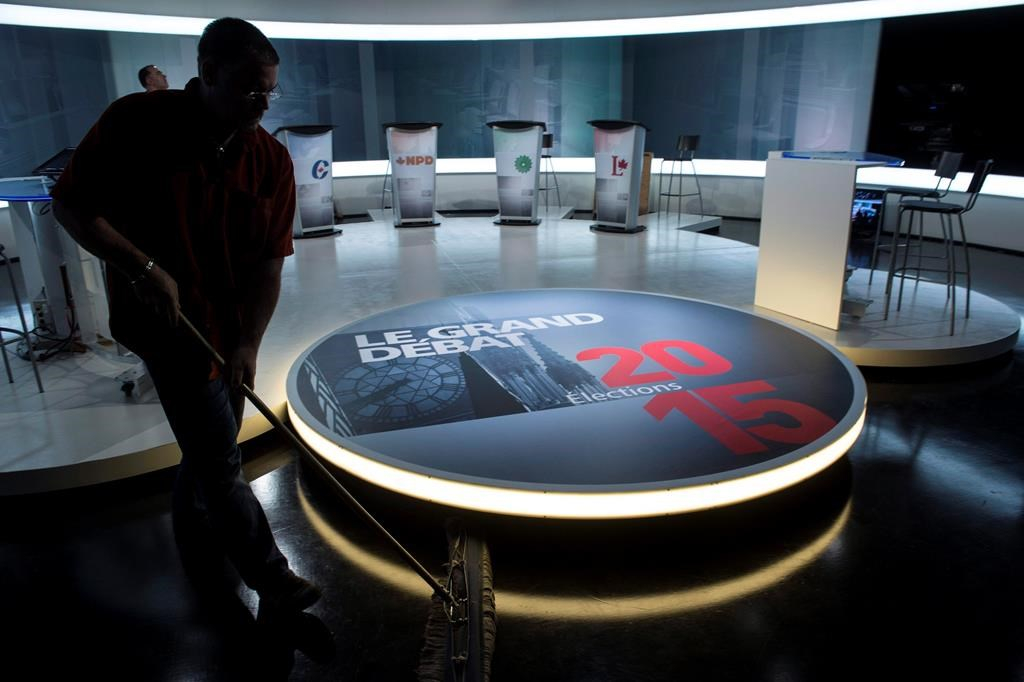 OTTAWA — The rehearsed talking points largely fell away Thursday as the federal leaders challenged each other directly on some of the touchiest topics in Canadian politics — minority rights, human rights and Quebec sovereignty, to name a few.

The third debate of the election campaign, this one in French, also proved to be the most lively, with one-on-one exchanges filled with sharp accusations and forceful declarations.

And it featured one of the most heated exchanges of the election debates so far, on the controversial question of Muslim women who cover their faces.

Conservative Leader Stephen Harper and the Bloc Quebecois' Gilles Duceppe have both been running provocative television ads saying women who wear the veil should be made to remove it during the ceremony.

"We're talking about a fundamental question, it's the question of equality between men and women in our society," said Duceppe, who promised legislation to extend a ban on the veil to other areas, such as public servants.

NDP Leader Tom Mulcair and Liberal Leader Justin Trudeau, who are going head to head for seats in Quebec, wound up on the same page on the issue — they don't believe a woman should be told how to dress.

"I understand it's a question that makes many people uneasy, but for me, the state is there to defend minority rights, and to defend the rights of women," Trudeau said.

That led to a tense face-to-face confrontation between Harper and Mulcair.

"Mr. Mulcair, I will never tell my young daughter that a woman should cover her face because she is woman. That's not our Canada, that's not acceptable for me," Harper said.

"Attack the oppressor, don't attack the woman, Mr. Harper ... have the courage to do that," Mulcair said. "It's not by depriving these women of their citizenship and their rights that you're going to succeed in helping them.

"You're playing a dangerous political game."

Green party Leader Elizabeth May called the issue a "fake debate" that has nothing to do with important questions on climate change, unemployment and the economy.

"For women's rights, where is the inquiry on missing and murdered aboriginal women?"

Other lively moments came during a discussion on constitutional issues, where Trudeau challenged Mulcair's position that a simple majority in a referendum would be enough for Quebec to separate from Canada.

"Mr. Trudeau says it will take much more than simple majority, but he refuses to say how much," Mulcair said.

Trudeau said Mulcair's own party constitution would require more than just 50 per cent-plus-one of voters to remove "new" from the name of the New Democratic Party.

"A prime minister should fight for the unity of the country, and it won't surprise anyone that's what I intend to do," said Trudeau.

Harper — whose presence was much more low-key than in previous debates — simply repeated that he wasn't interested in reopening constitutional talks.

Duceppe, meanwhile, seemed to lend the entire event an extra electricity. His positions matched and clashed with the others on stage depending on the issue, and with the exception of May he went after the other leaders with elan.

During an exchange on Canada's military mission in Syria and Iraq, which Duceppe supports, he demanded that Harper explain why Canada is selling military vehicles to Saudi Arabia.

Harper defended the contract as one of the biggest in Canadian history, and called Saudi Arabia an ally.

Later, Duceppe pressed the subject of Saudi Arabia's human rights record, raising the case of jailed blogger Raif Badawi and another man who faces public beheading for protesting the government.

"We've indicated we would welcome Mr. Badawi, who is not a Canadian citizen, at any moment," said Harper, noting that the military vehicles deal has created thousands of manufacturing jobs in London, Ont.

"It's not right to punish workers in a London plant for that. That doesn't make sense."

On the environment, most of the firepower was directed at Harper, who was slammed by his rivals for not doing enough to reduce greenhouse gases and properly vet energy projects.

Duceppe also criticized Trudeau for not opposing the Energy East pipeline project that will run through the province.

"We need to restore confidence in a government that will be a referee and not a cheerleader for pipeline projects," said Trudeau.

Harper accused his rivals of not being in favour of replacing foreign oil with Canadian oil. "That's false!" exclaimed Duceppe, who was backed by May. "That oil is neither consumed nor refined in Quebec."

The leaders also debated the plight of Syrian refugees, and Canada's military mission in the region.

Again, Harper was criticized by the four others for not doing enough to bring in refugees. Duceppe pointed out that the military helped bring thousands of people fleeing Kosovo into Canada in a matter of weeks in the late 1990s.

But the Bloc leader agreed with Harper once more, on the military mission.

"There are moments in history when we have to intervene militarily...We can't just knock on the door of the Islamic State and say, 'We're here to bring humanitarian aide,"' said Duceppe.

May said bluntly it was "useless to bomb the Islamic State."