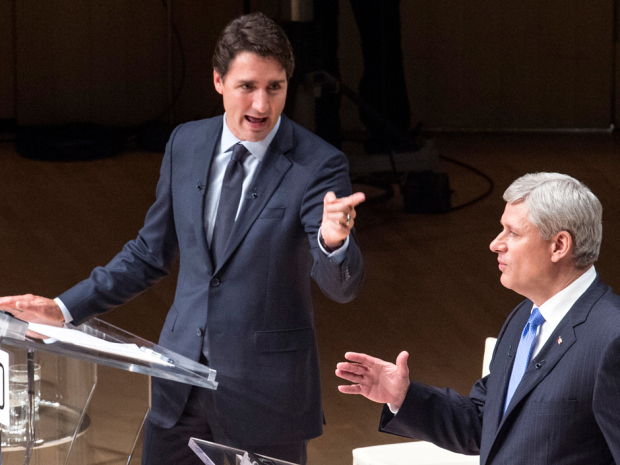 It was a different Justin Trudeau who entered the heavyweight ring at Munk School of Global Affairs' election debate on Monday.

Not that there was any knockdown, winner-take-all moment in the three-way slugfest, but a slugfest it was. For the most part, Trudeau took all comers and gave as good or better than he got. When it was over, the Conservatives’ carefully crafted label “Just Not Ready” lay in tatters on the floor, trod underfoot by the departing company.

For 120 minutes Trudeau fiercely and relentlessly took the fight to Harper. For his part, Stephen Harper, the consummate politician, never imagined that the autumn of his political career would find him on the ropes fending off Justin Pierre Trudeau.

And the spectre of Pierre Trudeau, which has hovered over this campaign and its participants like Banquo’s ghost, finally made its entrance last night as his son passionately invoked his name and legacy. If expectations and comparisons inhibited Trudeau the Younger’s early campaign performance, on Monday he seemed to finally assume (or grow into?) the mantle that had always been waiting for him.

Harper had a Harper night. Too astute to be knocked off his game, the prime minister delivered a classic solid performance aimed directly at his base, seasoned with a dash of terror.

Harper is the Holiday Inn of prime ministers—the best surprise is no surprise. Nobody wants a surprise like a (Muslim!!) terror attack, for instance, which is what we could get (did get) under a Trudeau (Harper) government.

Yet throughout, the old war-horse failed to dominate or intimidate the young lion—a message not lost on the great majority of voters seeking change.

Surprisingly, it is Tom Mulcair who suddenly appears out of his depth in the cut and thrust of a free-wheeling debate. The master inquisitor who dazzled Question Period during the Duffy affair finds himself unexpectedly at sea in the open contest of televised debate.

His early jabs at Trudeau stung but didn't shake, then sank into a sort of peevishness.

The Munk debate was a moment for Mulcair to demonstrate his capacity as an agent of change. But the change-agent looked like a well-worn suit with wing-tip shoes.

Mulcair held steady when he had to make a move, while Harper played on race and fear. Justin Trudeau’s star is clearly on the ascendance as the embodiment of energy, change, optimism and vitality.

As we enter the final weeks of the campaign, those qualities will come under increasing attack from racial division and fear.

On Monday, Justin Trudeau showed he’s ready for that fight.

Justin Trudeau's fight for the top