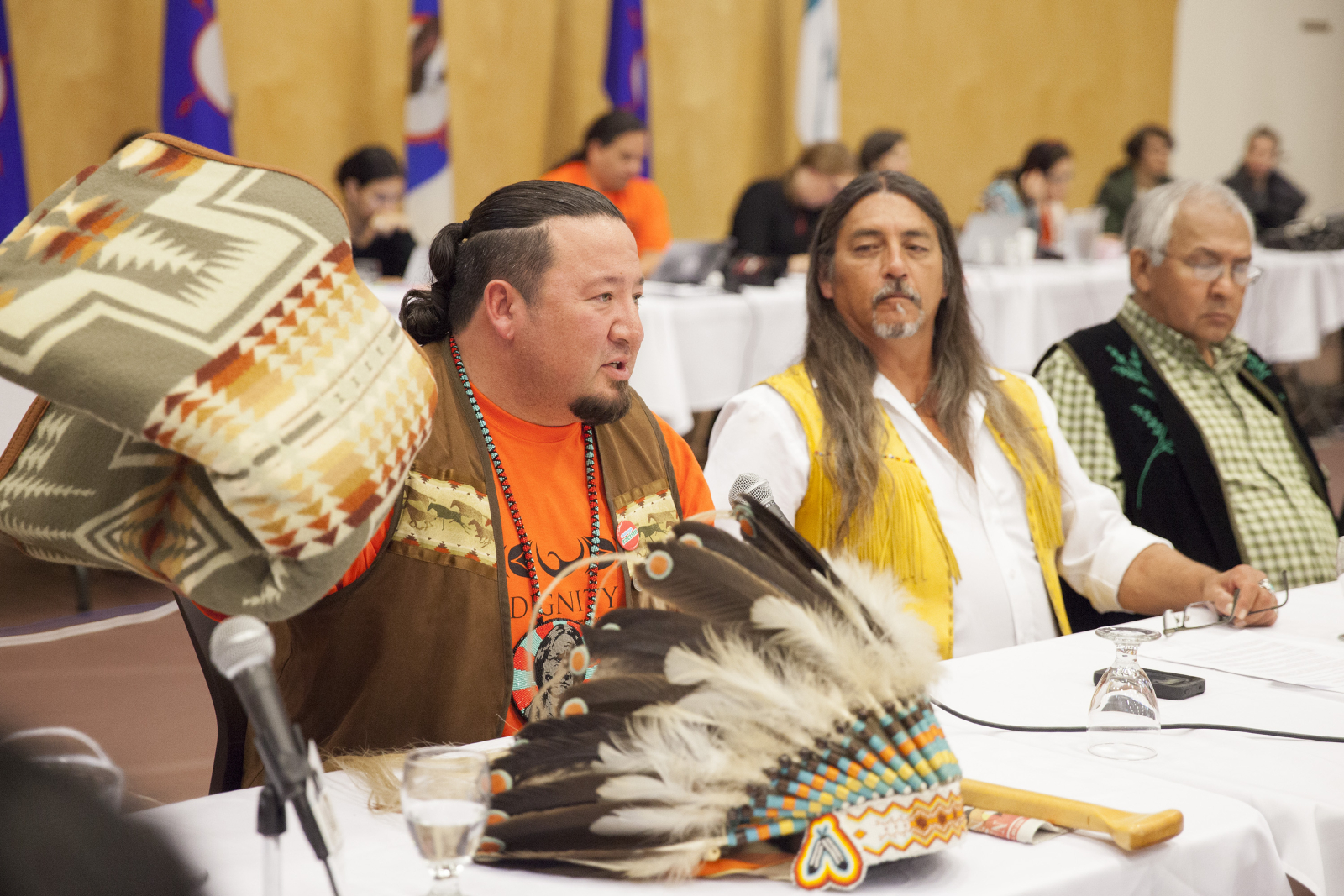 Manitoba Grand Chief Derek Nepinak [left] at a B.C. First Nations assembly in in Musqueam territory in Vancouver on Wednesday. To the right is Grand Chief Serge Simon of the Mohawk Council of Kanesatake. Photo by Mychaylo Prystupa, National Observer
Previous story
Next story

Indigenous leaders from across Canada are forming a new national political alliance to support opposition to TransCanada's Energy East pipeline. The coalition of chiefs hopes to share B.C.'s lessons for thwarting oil sands pipelines with bands from the Prairies and Eastern Canada.

Quebec, Ontario and Manitoba First Nations chiefs voted unanimously at a Union of B.C. Indian Chiefs conference on Wednesday in Vancouver to develop strategies to work together to oppose Energy East, which they see as an unacceptable risk to their lands and waterways. A first-of-its kind “Indigenous Treaty” is also in the works to tackle oil sands expansion in general.

Grand Chief Serge Simon of the Mohawk Council of Kanesatake of Quebec said the federal Conservatives' pro-pipeline policies have alienated many First Nations, and attempted to speed pipeline approvals through a "flawed" National Energy Board hearing process.

"Don't tell me oil is the answer —no, it's not. It's far from being the answer. It's the problem."

Simon said the new agreement helps central and Eastern Canadian bands in their dealings with pipeline companies too.

“We may show this to Enbridge or TransCanada and say, ‘We’re not alone… It gives us a big stick to fight with," he told the chiefs at the convention on Musqueam territory.

Manitoba Grand Chief: "We know the climate is changing."

“We know the climate is changing. You don’t need a scientist to tell you that,” said Grand Chief Nepinak, of the Assembly of Manitoba Chiefs. "We can feel that when we go outside. The forest fires across the land."

“[And] if we move forward with Mr. Harper’s natural resource development strategy, which would mean new pipelines across the territories, which would mean an expansion of the tar sands, we’re not doing anything for our future generations.”

“In fact, I believe we are assuring great tragedy for our children and grandchildren,” he added.

TransCanada spokesperson Tim Duboyce said Energy East represents jobs and revenues for First Nations, while the company itself is actively engaged in the nearly 180 Aboriginal and Metis communities impacted to hear local concerns.

“The issues that get raised by First Nations leaders, are many of the same issues that non-First Nations communities raise —it’s about water safety, environmental protection, and of course that issue of GHGs and climate change and what this pipeline will mean when it comes to that."

"There are alternative sources of energy out there that governments can help us develop. The technology is there. The government has the ability to create tax credits, incentives, and research towards transitioning off the fossil fuel industry."

“This is not about economics... it’s about making the responsible decisions to ensure that life can sustain itself in this territory... for another 1,000 generations.”

Eight B.C. First Nations will also be in federal court on Thursday in Vancouver in a high-stakes legal attempt, during the height of the federal election, to overturn the Harper government's June 2014 decision to approve the Northern Gateway pipeline with 209 conditions.

Many of these bands are with the Yinke Dene Allliance —a union of six northern B.C. First Nations opposed to the Northern Gateway pipeline. The group just completed a "West meets East" national tour to share their B.C. experiences battling Enbridge with First Nations facing the proposed Energy East pipeline.