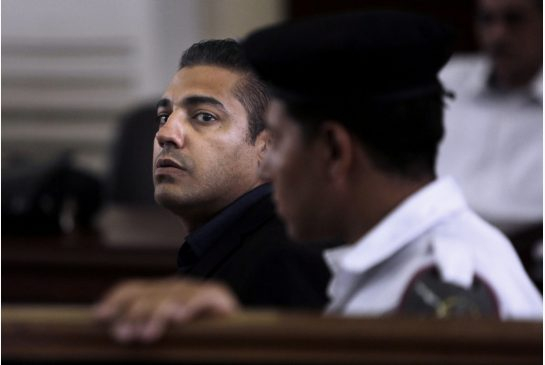 Canadian journalist Mohamed Fahmy wasted no time in blasting the Harper government just 18 days before the federal election for overstating its role in securing his recent release from an Egyptian jail.

“When a Canadian citizen is in prison and caught up in a case so complicated, related to terrorism, the most efficient and senior officials in the Canadian government should intervene from day one," Fahmy told Canadaland’s Jesse Brown in an extensive interview on Sept. 28.

"My intention when I go back to Canada — and I will be arriving before elections — will be speaking in several rallies without pledging allegiance to any specific party to constructively highlight what the Canadian Government could have done in a better way in order to protect me while I was in prison.”

While Fahmy refused to endorse any one party in the upcoming federal election, he praised both Liberal leader Justin Trudeau and the NDP’s Thomas Mulcair for speaking out on his behalf, questioning Stephen Harper’s handling of the case in Parliament, and lending support to his family in Canada.

He also told Canadaland that he would not speak at any Conservative rally, despite being invited.

“In the grapevine here in Egypt, many people — because of this case — are very doubtful of what Canada can do for their citizens. We need as Canadians to improve this image. We need to have leaders who will promote what Canada stands for,” said Fahmy, speaking to Canadaland from Egypt.

Arrested nearly two years ago in Egypt on trumped-up national security charges, the Al Jazeera reporter criticized then-foreign affairs minister John Baird for publicly stating that Fahmy would not face trial in Canada if released and sent home, which only succeeded in embarrassing the Egyptian government.

Fahmy believes that at that point had a real chance of returning home, as the Cairo regime had announced a new law allowing foreign prisoners to be deported to face trial and/or imprisonment in their home countries.

But that opportunity, Fahmy contends, was squandered by Baird’s announcement.

“I do remember it like it was yesterday, when Mr. John Baird said that. I was jumping with anger. My family was emailing the ambassador at his comments that Canada would not put me on trial," said Fahmy.

"Well, Australia wasn't going to put Peter Greste [another Al-Jazeera journalist imprisoned with Fahmy] on trial, but they didn't say that because that would embarrass the Egyptian government. All the journalists who attended the press conference where Mr. Baird announced that were shocked that he said it. That immediately kills what the Egyptians were trying to do, which is get rid of me in a face-saving manner."

In the midst of the Fahmy row, Baird visited Egypt and was given a guided tour of the ancient Luxor ruins to promote tourism in that country, before pledging $60 million to help train the Egyptian police.

It was those very same police who arrested Fahmy and left him in solitary confinement for one month with a broken shoulder.

“I was hoping that, OK, you are giving them all this support, can't you nudge them to release the innocent journalist who’s in prison?" said Fahmy.

"I was in complete shock that they were not able to seal the deal knowing the kind of support they're giving the Egyptian government. So, many questions and no answers yet."

Baird, who visited Egypt in January, did hold meetings with Egyptian officials to try and get Fahmy released, but failed.

At the time, as reported by CBC, Fahmy said in a statement that “I understand that the ability of the Canadian government to help me is limited by the rules of diplomacy. But I do believe that Prime Minister Harper could do more to obtain my release if he were to directly intervene in our case."

Harper turned down a request by Fahmy to speak with him, while Baird refused to meet his lawyer Amal Clooney soon after Egypt’s government announced its new deportation law.

Following his return from Egypt, Baird resigned his post as foreign minister.

But before stepping down, Baird said that ‘bullhorn diplomacy’ to pressure Egypt’s government into releasing Fahmy was inappropriate in his case, despite the previous success of such tactics in shaming the military regime of Abdel Fattah el-Sisi into releasing journalists Tarek Loubani and John Greyson.

While pointing out Baird and Harper’s mishandling of the case, Fahmy expressed gratitude to all who supported him while in jail, including Canada’s ambassador to Egypt and the Conservative Party.

Nonetheless, he warned that his case held important lessons for the Canadian government in caring for its citizens jailed overseas.

“There will be other Canadians who will get caught in the political turmoil in the Middle East. It could happen any day to doctors, journalists, anyone, and we need to be ready to deal with it. My case is not going to be the last one, I assure you on that,” said Fahmy.