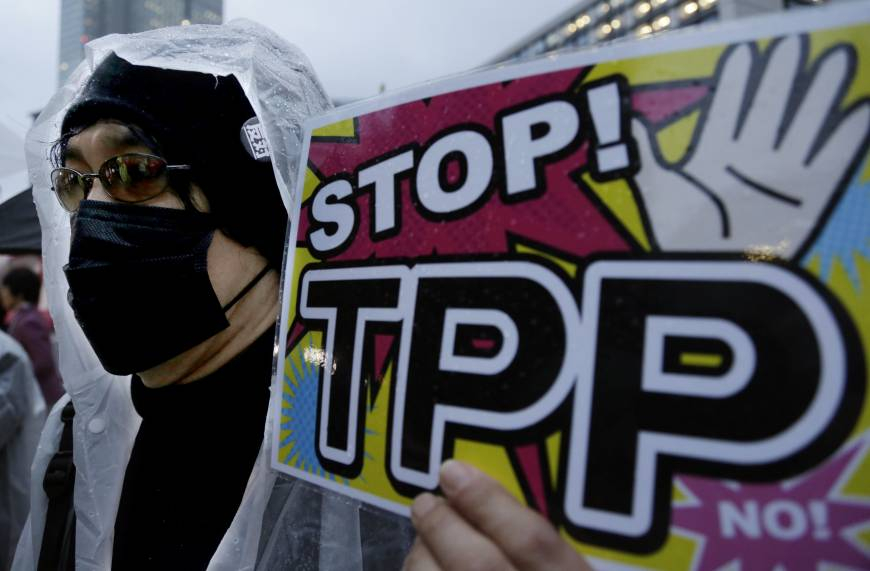 ATLANTA — A last-minute sprint toward a historic trade agreement has turned into yet another marathon negotiating session, with the suspense rippling from the negotiating table into Canada's federal election campaign.

Negotiators appeared very close to striking the 12-country Trans-Pacific Partnership Agreement on Sunday afternoon, with plans to announce the creation of the world's largest trade zone.

Here's how close: Reporters were brought into a room for a briefing session on the deal, were made to sign confidentiality agreements to keep the details secret until a formal announcement, and ziploc bags were distributed around the table to confiscate cellphones until the news embargo was lifted.

A planned news conference to announce the deal was rescheduled — from 4 p.m. to 6 p.m., then 8 p.m., and was eventually postponed indefinitely, in a fitting finale to a ministerial meeting marked by all-night negotiations that was intended to last two days, then three, four and finally a supposedly make-or-break fifth day.

The overnight hours into Monday could prove pivotal in determining whether the Canadian election experiences a debate on a deal, or a debate on which party should take over this process after Oct. 19.

The talks appear likely to break up Monday as some ministers planned to leave for a G20 summit. Japan's envoy has warned he can't stick around through the day.

It was supposed to be a quiet day off the campaign trail for Stephen Harper. But his Sunday wound up consumed by trade talks, with the prime minister in Ottawa getting phone briefings from the negotiating team in Atlanta.

Another country's minister confirmed that last-minute snags had delayed a deal. Robb said a struggle over next-generation pharmaceuticals had a cascading effect on attempts to resolve other issues.

One of those issues, insiders say, is Canadian dairy.

Robb explained that the U.S. and Australia had worked all night into Sunday to resolve their differences on cutting-edge, cell-based medicines and made a breakthrough around 3 a.m.

He said they'd succeeded at establishing a model that bridges the gap between two entrenched positions: the more business-friendly, eight-year patent-style protections the U.S. wants for biologics, and the more patient-and-taxpayer-friendly five-year model preferred by Australia and others.

But that triggered a chain-reaction. Some other countries weren't pleased with the compromise, and that discussion became more multi-sided with two or three holdouts remaining, he said.

Canada is not too involved in that skirmish. But the delay, according to Robb, wound up pushing other issues to the backburner until Sunday morning and they're still being worked out.

Insiders say access to Canadian grocery shelves is chief among them. Negotiators have been haggling about how much foreign butter, condensed milk and other dairy products should be allowed into Canada.

New Zealand helped create the TPP project a decade ago and it wants to sell more butter in North America — especially in the United States. It says the U.S., however, won't open its own agriculture sector until getting some assurance that American producers could sell more in Canada and Mexico.

Currently, 90 per cent of the Canadian dairy market is closed to foreign products. The system allows for stable incomes in farming communities, but it limits options and drives up prices at the grocery store.

Representatives of the dairy lobby milled about the convention site late Sunday. They professed to still be in the dark about what market-access offer Canada had made.

In an unusual twist, the evening's drama came with a special soundtrack: a concert by the band Foo Fighters which could be heard throughout the hotel-convention complex hosting the negotiations.

While negotiators hashed out percentages and contemplated the long-term consequences on dairy farms and hospitals, many thousands of concertgoers could be heard chanting nearby, oblivious to the unintentional symbolism, "I swear I'll never give in... Is someone getting the best, the best, the best, the best of you?"

An agreement would complete a decade-long process that began with four countries in Asia and Chile, and spread to the United States, then Canada and other Latin American countries.

The state of play was summarized by New Zealand's trade minister — who easily provided the most-memorable quote of the five-day meetings.

Under pressure to obtain foreign access for his own country's dairy, he told one of his country's newspapers that difficult compromises will have to be made.

He illustrated it with an unappetizing culinary metaphor.

"It's got the smell of a situation we occasionally see which is that on the hardest core issues, there are some ugly compromises out there," Tim Groser told New Zealand's Weekend Herald.

"And when we say ugly, we mean ugly from each perspective — it doesn't mean 'I've got to swallow a dead rat and you're swallowing foie gras.' It means both of us are swallowing dead rats on three or four issues to get this deal across the line."