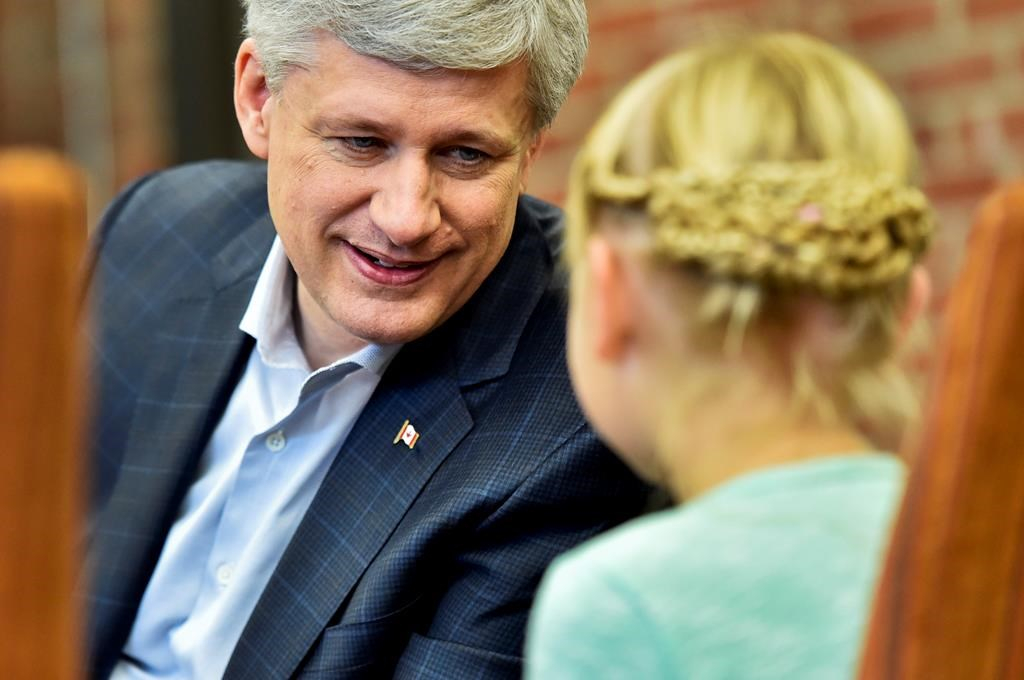 OTTAWA — Stephen Harper took the politics of niqabs to a higher level Wednesday, suggesting a re-elected Conservative government would consider legislation banning the Muslim face covering for anyone dealing with — or working for — the federal government.

He opened the door earlier in the week with a CBC television interview, saying niqabs could be nixed in the public service — echoing similar comments last week in the French-language leaders' debate.

But on Wednesday, the Conservative leader went further, lauding Quebec's Bill 64, which requires those who wear face coverings to remove them if they want to work in the public sector — or do business with government officials. Although tabled in the National Assembly, the bill has yet to be debated.

He called the Quebec Liberal government's approach measured and pledged that when it came time for federal legislation, he would follow their lead.

"I believe the Quebec government has been handling this controversial issue in a responsible manner and we will do exactly the same thing in Ottawa," Harper said during a campaign stop in Saskatoon.

As if to hammer home the point, the Conservatives released online attack ads in French Wednesday, going after Justin Trudeau's position on the niqab.

A proposed ban on niqabs in the federal civil service would affect an infinitesimally small number of bureaucrats — if any at all. Statistics from 2011 show only 1.8 per cent of 257,000 federal employees are Muslim women and only a small subset of them is likely to wear face coverings.

The Conservatives have already tried to require Muslim women to show their faces at citizenship ceremonies, but those rules are being challenged in the courts. Harper's comments on Wednesday make clear he is eyeing additional legislation to require women to unveil every time they want services from the federal government.

Harper insisted his government has been "saying the same thing for several months" on the issue.

While the prime minister may have been consistent in his comments that niqabs are contrary to Canadian values, that doesn't mean members of his own cabinet are all on the same page about a wider ban.

Asked last spring whether the Conservatives would consider implementing measures similar to those in Quebec, Treasury Board President Tony Clement said the federal opposition to niqabs was limited to citizenship ceremonies.

"That is what the prime minister said and that is a point of view that one can hold," Clement said on March 11, 2015. "That doesn’t mean that you can impose that view in the workplace or in the private sphere. The one place where I think we have a right and an obligation to stress Canadian values is in the act of obtaining one’s citizenship"

Both Trudeau and NDP Leader Tom Mulcair condemned the latest proposal as an attempt to distract voters from serious questions about Conservative management of the economy.

Mulcair said what Harper was doing as "bizarre" and "dangerous" and part of a broader political strategy aimed at getting the Conservatives re-elected by accentuating differences rather than bringing people together.

"Stephen Harper is reminding us every time he does this why he doesn't deserve to be prime minister," Mulcair said in Enoch, Alta., as he highlighted his party's $4.8 billion plan to improve aboriginal education

Trudeau, in London, Ont., said Harper's divide-and-conquer approach "is unworthy of the office he holds and he needs to stop."

"No election win is worth pitting Canadians against Canadians."

The niqab debate comes as a Liberal candidate in London blamed divisive politics for the defacing of his election signs with ethnic slurs.

A photo posted online shows the words "ARAB scum" scrawled across one of Khalil Ramal's signs.

Elsewhere on the campaign, Trudeau promised a Liberal government would sign a landmark global treaty to regulate the arms trade — something the Conservatives have refused to do.

"Mr. Harper hasn't seemed to notice that the fact that he shouts loudly on the world stage doesn't offset the fact that nobody's listening much to Canada any more," Trudeau told a rally.

He pledged to forge a new relationship with aboriginal governments.

"For 148 years, successive Liberal and Conservative governments have failed indigenous communities in Canada," Mulcair said. "And Stephen Harper has made it worse."

The Conservatives announced, if re-elected, they will improve parental leave benefits, offering extended job protection, a chance to stretch EI benefits over 18 months and a pilot program to allow new parents to earn self-employed money while collecting EI.