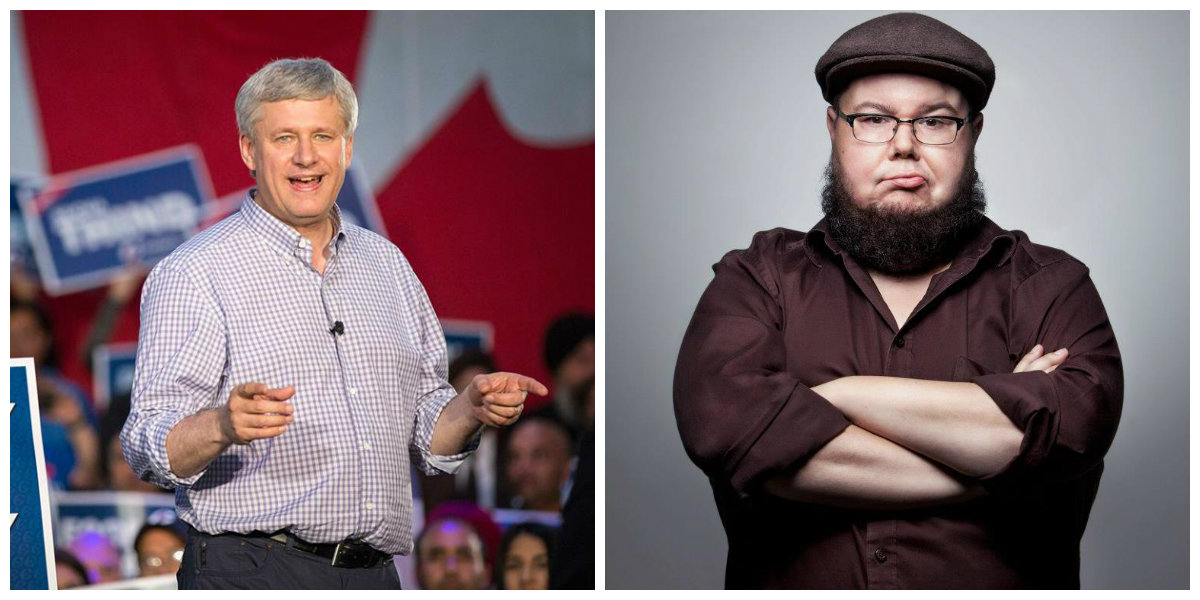 Titled The Cut, Koyczan’s poem rips through the Harper government’s policies like a steak knife, denouncing the Prime Minister’s hostility towards journalists and scientists, before damning him as “the pallbearer of our rights and freedoms, our rivers and lakes,” to a bleak-sounding musical background and photos of headlines from both National Observer and other media.

“We remember the cuts. How could we not? Most of them are still bleeding, open wounds needing attention they can never get," Koyczan says.

"You treat this country like your yard sale, you are ready, set everything must go. So long to employment insurance, so much for food safety, goodbye Wheat Board, farewell CBC. But we remember, just as surely as the veterans left feeling the phantom limb syndrome of having their benefits amputated you clearly don’t understand that language of reason."

Speaking to National Observer just one day after his poem was posted on YouTube, Koyczan decried the trampling of Canadian rights and laws to clear the way for a Conservative agenda that he said had never been made transparent, but described the concept of change as an “inspiring force.”

“There's an entrenched attitude toward the sciences that is dangerous. The rest of the world is embracing clean energy, but we cling to fossil fuels which damages our environment. C-51 undermines our privacy,” said Koyczan.

He further warned that deals like the Trans-Pacific Partnership could put healthcare, long a cherished part of Canada’s identity, into the hands of major pharmaceutical companies. Ordinary people would like end up as losers.

“How long before someone like Martin Shkreli skyrockets the price on medications my grandmother needs? Putting profits ahead of public health is not in the best interest of Canadians and despite public outcry they keep moving forward with these agreements. Canadians aren't being heard by the current leadership and that alone is reason to speak a little louder,” Koyczan said.

The Cut then lambasts Harper’s apparent fixation with pipeline-building at the expense of environmental laws, as well as contrasting his talk of fiscal responsibility with the longest and most expensive election campaign in Canada’s recent history, while leaving working people and students struggling financially.

“With no job creation, there are families so broke that they’re left to bear the costs of debts on food they’ve already eaten. There are women waiting for you to care less about what they wear and care more about the fact that so many have gone missing,” Koyczan says.

He then takes a sideswipe at public inaction and disinterest in voting that allowed Harper to win office, describing the prime minister as “the abscessed tooth of our apathy.”

However, Koyczan told National Observer that he understood why many people choose not to vote, saying that Canada suffered under a broken system that championed “corruption over compassion,” but voting remains the only viable way to boot Harper out.

“I'd like to remind people that politicians are not above us. No one who is paid with our taxes should ever be beyond accountability. That those who take office should be held to a higher standard, and that breaches of our trust should be met with the equal consequence imposed on any citizen who breaks the law.

"I hope to remind people that their vote is their voice, but we can't hear you if you don't use it,” said Koyczan.

When asked what he would say to Harper if he had the chance, Koyczan replied that there wouldn’t be much point saying anything if he was treated like the media and only allowed to ask one pre-approved question.

“I like answers to be free-range organic, not processed. I'd prefer to have to have a real back-and-forth conversation with him over a game of Scrabble. I'd be curious to hear what he has to say when the cameras and reporters are gone. I'd like to voice concerns to the man... not the figurehead. Our prime minister should be accessible,” said Koyczan.

As it moves towards its end, The Cut reminds Harper that he tried selling something – Canada – that was never his to begin with.

The poem ends with a typically Canadian apology: “We’re taking back the company and we’re very sorry, but we’re going to have to let you go.”

Having sliced through Harper’s policies in his poem, Koyczan outlined to National Observer his own agenda for getting Canada back on track.

"There's a long list of thing I'd like to see done. Canada is a large ship and it will take time to turn it around,” said Koyczan.

But Koyczan’s lyrical rampage against Harper stems from humble origins, written backstage at The Biltmore Cabaret in Vancouver as part of the #imagineoct20th campaign.

“There's footage of me reading it live that night. I had literally finished it about an hour before I performed for the first time. I wanted to record a cleaner version with a few edits. Hannah Epperson bloodied her fingers recording the music on a phone. I also wanted to add French subtitles as it's a large part of our Canadian identity. Given more time I would have included some French headlines but we did this remarkably fast and on a budget of nothing,” said Koyczan.

He did however receive help from Vanessa LeBlanc on translation into French and Corwin Fox for mastering his piece.

As well as being a poet, Koyczan is a spoken-word artist and writer who released his new album, "Debris," last month.