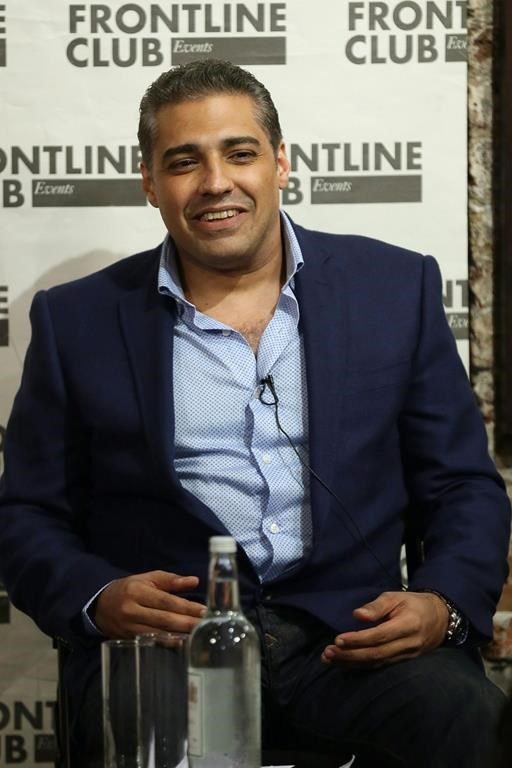 TORONTO — A Canadian journalist who was released from prison in Egypt last month has returned home, marking the end of his nearly two-year ordeal in a case that raised questions about Egypt's commitment to free speech.

"This is what I've been waiting for," Fahmy said Monday.

"I felt humbled and safe seeing the kind and heartfelt vibes from the police officers and security at the airport who were extremely hospitable and recognized my face despite my attempts to keep my arrival quiet. It was mind-boggling that the cab driver, passengers on the flight and strangers recognized me in the airport and knew the details of my story. I felt lots of warmth and love."

He expressed similar feelings in a series of tweets in which he thanked those who supported him.

"Happy Thanksgiving Canada! Walking the streets of Toronto with my wife is a truly liberating feeling! We feel safe, free, & at home! #Love"

Fahmy was arrested in 2013 with two Al-Jazeera English colleagues. He was sentenced to three years in prison in a retrial this year for airing what a court described as "false news" and coverage biased in favour of the now-banned Muslim Brotherhood.

The case was widely condemned. He and his Egyptian co-defendant, Baher Mohammed, received a presidential pardon last month. The other colleague, Australian Peter Greste, was released a year before Fahmy after Australia's prime minister intervened.

Prime Minister Stephen Harper, who is facing re-election next Monday, has been criticized by Fahmy and others for not doing enough to get the journalist back to Canada. Fahmy said he made sure to come back to Canada amid the campaign because he feels it his responsibility to start a debate on the issue.

Fahmy said Harper's "hyper conservative approach directly damaged and delayed my chances for freedom." He said former Foreign Minister John Baird damaged his case when he said during a press conference in Egypt that Canada would not prosecute Fahmy should he be turned over to Canada, something Fahmy called a diplomatic faux pas. He said he would have more to say about it at a press conference in Toronto on Tuesday.

A senior government official said Harper spoke with Egypt's president and sent several letters on Fahmy's behalf. The official spoke on condition of anonymity because the official was not authorized to speak publicly about the case.

Fahmy has said he was not aware that Harper had called Egypt's president. He said he was grateful but asked, "Why aren't they transparent about him making a call and taking a stand?"

Fahmy met with Liberal leader Justin Trudeau late Monday and has plans to meet with New Democrat leader Tom Mulcair but said he has no plans to endorse a candidate.

Fahmy left Cairo last week after learning his name had been removed from a no-fly list. He stopped first in London, where he was to meet with his high-profile lawyer Amal Clooney.

He is scheduled to attend a press conference hosted by Canadian Journalists for Free Expression at Ryerson University on Tuesday.

He has said he plans to take up a position as an adjunct professor at the University of British Columbia's school of journalism in Vancouver. He is also writing a book about his experiences.

Fahmy moved to Canada with his family in 1991, living in Montreal and Vancouver for years before eventually moving abroad for work, which included covering stories for the New York Times and CNN before his job at Al Jazeera.