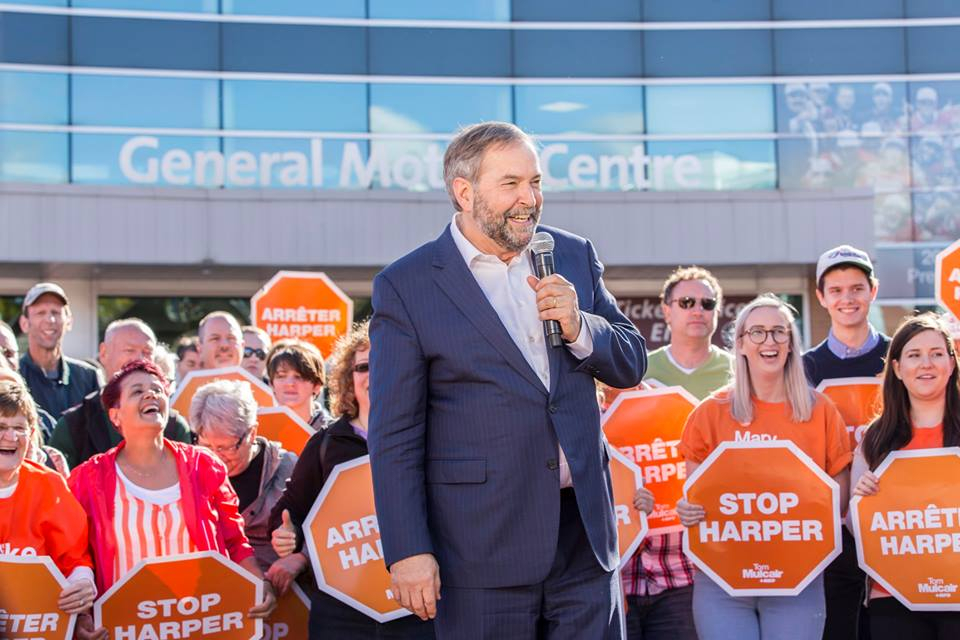 NDP leader Tom Mulcair at an earlier campaign stop this year. Photo courtesy of the NDP
Previous story
Next story

“They’re together on the Trans-Pacific Partnership," Mulcair told a room of cheering supporters waving orange Stop Harper signs. "I can guarantee you, I’ve never voted for a Stephen Harper budget."

The NDP leader made his remarks during a town hall meeting on Dartmouth, Nova Scotia’s waterfront Alderney Landing.

Mulcair said the trade deal would also make it more difficult to bring in new rules to protect the environment and that net neutrality would be a thing of the past.

“These are all things that are starting to come out as people realize what’s in this deal. Mr. Harper, if you’re so proud of this deal, make the whole thing public,” Mulcair said.

The full text of the TPP deal has yet to be released to the public, but it has drawn sharp criticism from the dairy and auto industries, among others. The Canadian auto workers’ union, Unifor, told the Canadian Press 20,000 auto industry jobs could be lost as a result of the deal.

Trudeau has said his party "strongly supports free trade," but suggested the deal would be subject to a "full and open public debate in Parliament" to ensure Canadians are consulted.

NDP fighting to keep up support in Halifax-Dartmouth

Mulcair’s responses to the reporters put to him at the event were largely the same: he said the NDP is going to form the government in Ottawa, October 19. The message was clear, and despite a recent dip in the polls, he wasn’t deviating from it.

In Dartmouth-Cole Harbour, where Mulcair was speaking, the NDP trail 26.7 per cent to the Liberals' 54.6. In Halifax West, the Liberals dominate with 58 per cent of potential voter support to the NDP’s 19.7.

The tightest race is in Halifax proper, where incumbent Megan Leslie is attempting to capture the seat for third time. She is up against city planner Andy Fillmore, who is running for the Liberals. The projections show the Liberals with 42.8 per cent to the NDP’s 40.1 per cent.

Historically, the riding is an important one for the NDP. Former Nova Scotia NDP leader Alexa McDonough took the seat in 1997, holding it until Leslie took over in 2008.

During a question-and-answer session with audience members at the town hall, Mulcair also ripped into Harper for signing the Trans-Pacific Partnership deal.

He said the trade deal would cost tens of thousands of jobs for Canada, among other ramifications such as higher drug prices.

“So Mr. Harper wants to make it more expensive and Trudeau’s backing him in that. How does that make sense?”​