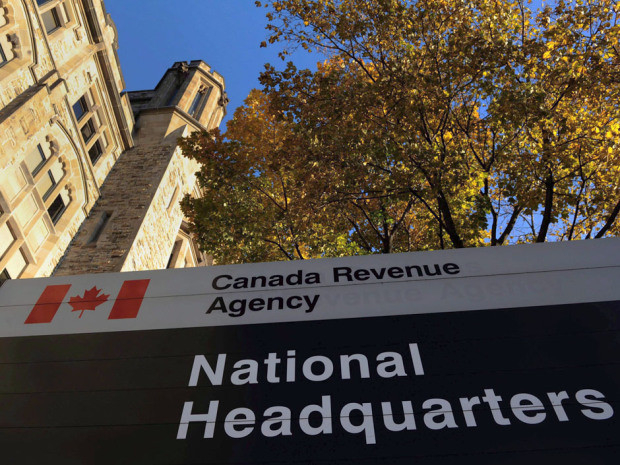 Larco Investments Ltd. owns three buildings in Montreal, Calgary and Edmonton where they rent office space to the CRA. Larco purchased the buildings from the federal government in 2007.

Yet evidence has emerged that Larco takes advantage of offshore tax havens.

“It's interesting to us that as a government landlord, that’s also the landlord of the CRA, when the CRA is supposed to be going after this (offshore) stuff… it just raises questions about whether the CRA is aware,” says Michelle Travis, research co-ordinator of UNITE HERE Canada, a retail sector union which represents workers employed by Larco.

UNITE HERE stumbled upon Larco’s use of offshore tax havens while researching the company.

The Larco-CRA case is symbolic of the Harper government’s track record of allowing billions of dollars of potentially taxable corporate monies to flee to offshore tax havens. In 1990, only $11-billion was flowing from Canadian corporations to offshore tax havens: today this sum is almost $200-billion a year and growing. An estimated $8-billion is also lost annually through tax evasion.

These sums suggest that if the Harper government was more diligent in tracking offshore money or plugging holes in the tax code, they would not have to run deficits, impose austerity measures, raid the EI surplus or sell its shares in General Motors — while also funding health care, education and infrastructure.

“It’s a horrendous problem,” says Senator Percy Downe, Jean Chrétien’s former chief of staff, who has spent the past nine years pursuing the offshore tax haven issue. “If we collected what we’re owed to the government… there’d be additional money to fund programs that are being cut. And taxes could be lower or remain lower.”

In fact, Alain Deneault, a sociologist at the Université du Québec and author of the recent book Canada: A New Tax Haven, maintains “[The Conservatives] are offshore-friendly actually. They don't see it as something wrong officially.”

Larco is a privately-held company owned by the Lalji family, one of Canada’s wealthiest clans, sitting on a fortune estimated at $2.6-billion. Run by three brothers – Amin, Mansoor and Shiraz – the Laljis are Ismaili Muslims who fled Uganda in the 1970s during the dictatorship of Idi Amin, settling in BC. There they founded a burgeoning real estate empire, owning hotels and retail outlets such as the Park Royal Shopping Centre in West Vancouver.

The Laljis are notoriously private and media shy – the Globe and Mail’s business magazine once listed them among Canada’s “hermit kings” – although they haven’t escaped controversy entirely.

In 2007, Shiraz Lalji was criticized for destroying one of architect Arthur Erickson’s earliest single-family dwellings in BC – the David Graham house. “We were upset,” says Philip Boname, president of the Arthur Erickson Foundation, who said Shiraz never responded to appeals to change his mind.

In 2007, the Laljis paid $1.4-billion to buy seven federal buildings the Harper government had put up for sale – and then rented them back to the government with 25-year leases. The CRA has offices in three of the buildings.

By then, though, the Laljis had been using offshore tax havens for years. In 2003, Larco appeared before two Nevada gaming agencies when it wanted to change its financial arrangement with one of the casinos it owns in Las Vegas. The Nevada authorities wanted more information about who exactly controlled the casino.

At hearings in Carson City, Nevada, Thad Alston, Larco’s senior vice-president, gave an explanation, noting that “this [corporate] structure was created really with legal, tax and estate planning considerations for the Lalji family.”

The structure is complex: The Laljis had created a company called Hotspur Resorts Nevada Inc. to bid for casino assets in Nevada. Hotspur’s ownership was structured through a series of offshore companies based in the British Virgin Islands, a notorious offshore tax haven.

While it’s not illegal to park money offshore as long as you declare it to the CRA, these offshore havens are used because they charge little to no taxes for companies and wealthy families – which is why the money is deposited there. “There are so many loopholes available to companies that companies can do it legally,” says Dennis Howlett, executive director of Canadians for Tax Fairness, which lobbies against the use of such havens. “Unless you really flagrantly violate the laws, the CRA doesn’t have time or money to come after you.”

In his 2003 testimony, Alston indicated that the ultimate control of the family’s companies was held by the Lalji Family Trust. He said the trust was scheduled to be dissolved in 2005, whereby the Laljis would have to pay taxes to the CRA.

Thus, Alston said they decided to move some of this money offshore before 2005 “for estate planning and tax efficiency purposes, with the idea that you'd end up with a sum of funds offshore in a tax-free jurisdiction with the idea that with the funds under the control of essentially a bank, trust company, you would then have a way to manage those assets, those funds for the benefit of the families (for) generations to come. So that was the idea.”

He indicated that the sums moved offshore amounted to between $300-million and $500-million.

Ultimately, the offshore funds were managed by Hilfreich Stiftung, the Liechtenstein-based foundation created by the Laljis, which in turn was overseen by HSBC – a bank notorious for its offshore tax haven shenanigans. Media exposés earlier this year revealed how the bank’s Swiss arm helped wealthy customers dodge taxes and conceal tens of millions in assets.

During his testimony, Alston said: “We had a long-standing relationship with HSBC. They had been a primary lender of the Canadian operating company for over 15 years, and actually, we ended up spending a substantial amount of time with the HSBC people in Zurich, which is where they are set up to manage the Lichtenstein foundations that they manage.

"We also looked at their experience in managing funds for other wealthy families and were convinced that as these things go, HSBC would be the ideal candidate for managing these funds.”

The Hilfreich Stiftung, while run by HSBC employees, was to act on recommendations made by Alston and Shiraz Lalji.

At another point in his testimony, Alston revealed the Laljis make use of another notorious offshore haven – the Channel Islands, just off the coast of England, and the island of Jersey specifically. And there, the Royal Bank of Canada (RBC) was involved. “So if you look at the [family’s] hotels that are in London, those are owned by ultimately a [foundation] administered in Jersey,” explained Alston, noting that RBC’s managing director in Jersey manages those assets.

Despite this elaborate offshore structure, no evidence has emerged the Laljis and Larco are engaged in illegal tax evasion.

“I'm sure that setting up of the [Lalji family] trust was related to tax avoidance,” surmises Howlett. “We don't have enough evidence to say whether it was evasion or not. But why would you go to all that trouble unless there was some tax reason involved?... When something like this comes to a light it's important that the CRA investigate.”

This is not the only controversy swirling around the Laljis. At the time of the sale of the seven buildings to Larco in 2007, there was criticism over whether the family received a sweetheart deal from the Harper government.

Indeed, the NDP, Liberals and the Public Service Alliance of Canada (PSAC) trade union, claimed the buildings were sold for a song. A study commissioned by PSAC suggested that the buildings were unloaded for almost $800-million less than they were really worth. “The federal government has established a cloak of secrecy so dense [about this sale] that even MPs are being kept in the dark,” noted John Gordon, PSAC’s president at the time. “According to our calculations, Canadians could pay as much as $2 in rent for every $1 received in proceeds from the sale.”

Moreover, a CBC investigation last year found relations between Larco and the federal government had soured over management of the buildings, with bureaucrats at Public Works and Government Services Canada claiming that Larco was a poor landlord, overcharging for services and potentially engaging in fraudulent activity. In 2009, the department even sued Larco, which was settled two years later. The government's bureaucrats believed the leases with Larco were a bad deal for taxpayers.

Mansoor Lalji, on the other hand, claimed that Public Works had erected too many hurdles for them to operate properly.

Messages and an email from the Observer were sent to Thad Alston seeking comment on these issues but were not replied to. The CRA refuses to say whether they have or are investigating Larco or the Laljis over the use of offshore tax havens.

While other countries crack down on tax avoidance, Harper lays off thousands of CRA staff

If the Laljis are using offshore havens to chop their tax bill, they have plenty of company among Canada’s wealthiest families and the corporate sector.

In fact, the tax haven of Barbados is the second-largest recipient of Canadian foreign investment after the US – with $71-billion in 2014, up from $50-billion in 2010, while the Cayman Islands are ranked fourth, receiving $36-billion. “When Canadian corporations invest $71 billion in the Barbados we know it’s not about investment – it's about tax avoidance,” says Deneault.

Of course, using offshore havens for evading taxes is a time-honoured tradition among Canada’s political and business elites. Former prime minister Brian Mulroney received cash payments from German arms wheeler-dealer Karlheinz Schreiber totaling $300,000—though Mulroney claimed it was $225,000— in 1993 and 1994, which he didn’t bother declaring to the CRA until 1999. For a period of time much of this money sat in a safety deposit box in a New York bank.

Canada Steamship Lines Inc. (CSL), the family business of former prime minister Paul Martin Jr., has an international division registered in the Barbados. The Barbadian corporation is owned by a holding company in Bermuda, another offshore haven. This complicated setup allows CSL to escape paying millions in Canadian taxes.

Meanwhile, prominent business families such as the Irvings, Bronfmans and Stronachs use offshore havens to cut their tax bill, as do the chartered banks and corporations like Cameco, Gildan Activewear, Eldorado Gold, Cirque du Soleil and Québecor, among many others.

KPMG and banks like RBC have been investigated by the CRA for helping wealthy Canadians set up offshore tax structures.

And how has the Harper government responded? In 2012-13, the government chopped $259-million from the CRA’s budget over five years – the largest single cut to any department, making it harder to investigate tax evasion.“They laid off three thousand CRA staff, totally decimating capacity and losing many experienced auditors,” says Howlett. “What's happening now is while other countries are beginning to crack down, Canada is lagging behind.”

Meanwhile, the number of people convicted of tax evasion in Canada has dropped by more than half since 2009, according to the CRA’s own figures. In 2013, it was discovered that Jim Love, chairman of the Royal Canadian Mint, and a good friend of former finance minister Jim Flaherty’s, helped a wealthy Canadian family move millions through offshore havens to avoid paying taxes.

However, the CRA disputes there has been any reduction in "its efforts on international non-compliance," it said in a statement, or has cut the number of auditors it employs. The CRA says that $234-million, in fact, has been allocated over the next five years to expand its capacity in this realm, and they've added $7.8-billion to the revenue base over the past couple of years due to their work.

Nevertheless, Senator Downe is appalled at how little political will there is to collect monies owed to the government.