These ridings could make or break this election 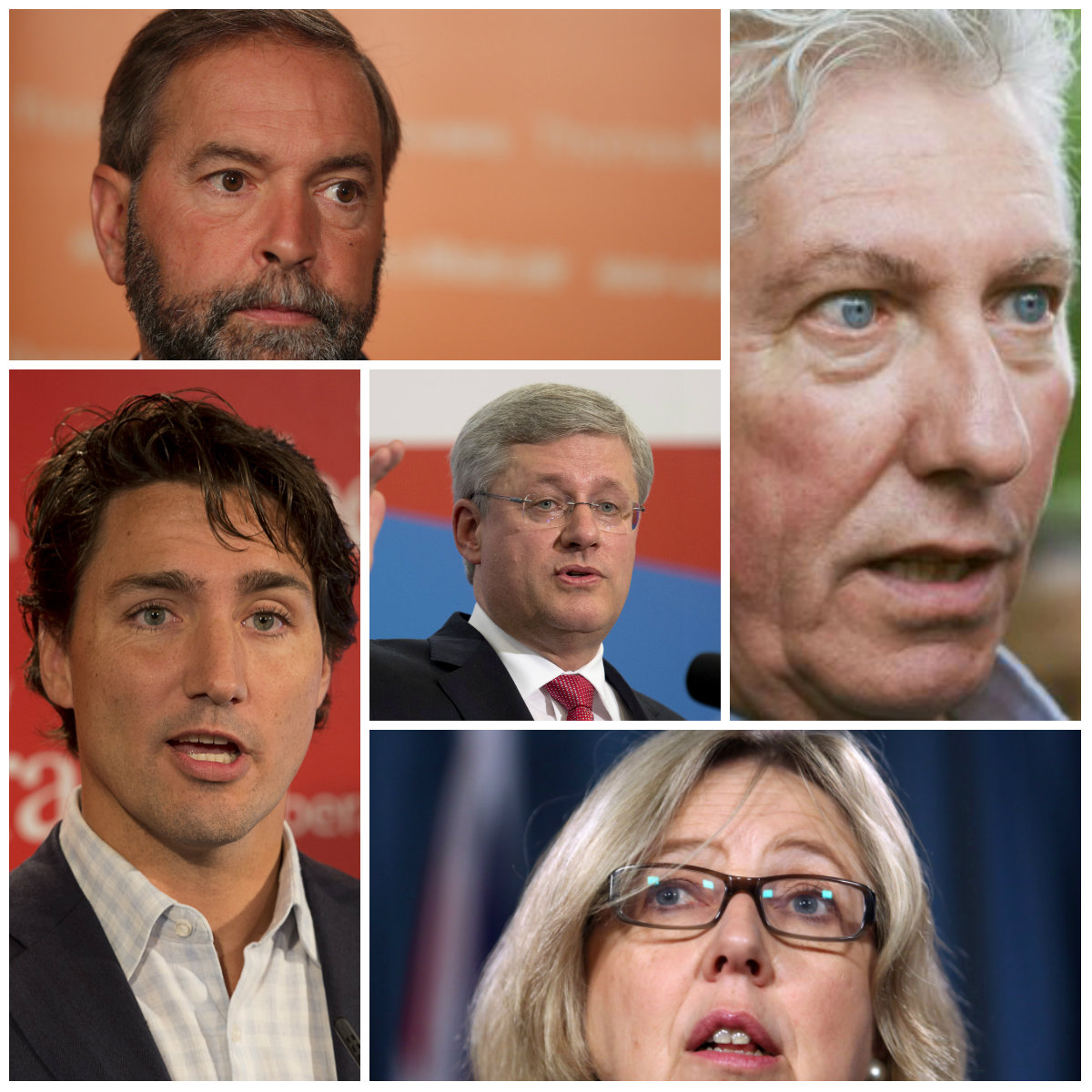 In past elections, the Liberals had no business campaigning in Perth-Wellington, a vast expanse of farmland dotted by small towns that has long been a Conservative stronghold.

But this erstwhile fortress has now been breached by a resurgent Liberal Party, whose candidate Stephen McCotter is riding at 34.7 per cent support, according to Three Hundred Eight’s latest information. McCotter is just behind Conservative John Nater, who is currently tracking at 39.5 per cent.

Meanwhile, the NDP’s Ethan Rabidoux is trailing third at 18.4 per cent. If another five per cent of progressive voters abandon him for the Liberals in this federal election, Stephen Harper’s grip on this once-safe seat— and on power — will be broken.

“That’s a sign the Liberals will get a majority,” said pollster Quito Maggi, CEO of Mainstreet Research. It's surprising, because “Perth-Wellington is as blue as they come.”

Tory MP Gary Schellenberger won Perth-Wellington for the fourth time in a row in 2011. The outgoing MP scored a solid 25,281 votes or roughly 54.5 per cent, far above the NDP’s total of 9,879, and roughly three times higher than the Liberal tally of 8,341 votes.

While the Tory slide in Perth-Wellington is seemingly unprecedented, the riding of Fleetwood-Port Kells is classic swing country: a Greater Vancouver suburb where the Conservatives and Liberals are tied 35-35, while the NDP lags at 24 per cent support, according to Maggi.

“Any slide by the NDP could signal that one’s going to go Liberal,” said Maggi.

However, Three Hundred Eight’s projections are already showing the Grits leading at 35.7 per cent, ahead of both the Tories and NDP, the latter at 29.7 per cent support.

Indeed, B.C. as a whole remains neck-and-neck, with Metro Vancouver’s ridings a major battleground. The urban region could provide the winner with not only with the keys to 24 Sussex Drive, but may also determine whether any new government is a majority or minority.

Vancouver Island however, will likely move more towards the NDP, according to Maggi.

Across the country in Quebec’s Chateauguay-Lacolle riding, Maggi said that the Conservatives, Liberals, and NDP were engaged in a three-way faceoff, fighting for a new seat that was created in the 2013 electoral boundary redistribution.

“The NDP’s come down,” said Maggi, who added that if the Liberals snagged Chateauguay-Lacolle it would be another indication that they were on track for majority government.

But Three Hundred Eight’s projections show the NDP in a nearly 18-point lead over the second-place Liberals in Chateauguay-Lacolle.

In Shefford, Maggi described a four-way fight between the NDP, Liberals, Tories, and Bloc Quebecois, but Three Hundred Eight once again offers a more optimistic projection for Thomas Mulcair’s Party, at 37 per cent support. This is nearly 18 points ahead of the Bloc’s 21.3 per cent rating, while both Tories and Grits languish in the high teens.

As for Outremont – Mulcair’s home riding – the NDP chief is still in the lead but the race is tightening, according to Maggi. Should NDP support crater, strategic progressive voters may yet choose the Grits and hand Trudeau a near-certain majority.

Three Hundred Eight’s figures are in agreement, showing a small NDP lead at 49.1 per cent, just ahead of the Liberals’ 38.1. Both the Tory and Bloc figures are in single digits.

Maggi identified 15 four-way and 10 three-way races across Quebec, with one party likely emerging dominant after a close tussle and scooping up most or all the seats.

However, Maggi said that the Conservatives did stand to gain in Quebec, likely around Quebec City.

“They are sure to pick up seats in Quebec,” said Maggi.

Over in Ontario, Maggi said that Harper may yet cling to power should finance minister Joe Oliver keep his seat in Eglinton-Lawrence, but Three Hundred Eight is projecting the Liberals at 52 per cent, a clear 20.5 points ahead of the Conservatives.

But Toronto’s 905-area suburbs – an old Liberal bastion – remain another key to victory, particularly the Brampton ridings that all shifted Tory in 2011.

“If those all go Liberal again it’s a pretty good sign,” said Maggi.

Moving further towards downtown, the biggest fights would be between the NDP and Liberals, in particular Liberal Adam Vaughan facing off against NDP's Olivia Chow in Spadina-Fort York as Trudeau seeks to reclaim Toronto’s core for his party for the first time since 2006.

East of downtown in Scarborough Southwest, Trudeau’s candidate Bill Blair will be up against the NDP’s Dan Harris, but Three Hundred Eight has the Grits leading at 48.8 to the NDP’s 27.1.

The Prairies as a whole remain solid Tory country of farms and small towns, as well as the beating heart of Canada’s oil industry, but even here Stephen Harper’s opponents have made inroads.

Maggi said that Saskatoon University could be a Liberal pickup, but Mainstreet last polled this area a year ago when Trudeau was riding high in national polls, before he was hit by a barrage of Tory attack ads.

Several hundred kilometres to the west, he described Edmonton’s Mill Woods riding as “neck and neck,” owing to its young population looking towards both the NDP and Liberals. Maggi said that the Grits have a capable local candidate in Amarjeet Sohi, who previously served as a local councillor.

According to data scientist Ali Kashani, the federal election actually hinges on 16 special ridings where the Conservative candidate is slightly ahead, a progressive runner slightly behind, and a third anti-Harper candidate trailing third but with still has enough support to impact the result.

The solution to him is obvious: have both progressive candidates in each riding co-operate with each other to ensure a Conservative defeat in all 16 ridings.

Eight ridings that the Liberals can win include the Ontario battlegrounds of Brampton Centre, Aurora-Oak Ridges-Richmond Hill, Bay of Quinte, Haldimand-Norfolk, King-Vaughan, Vaughan-Woodbridge, Northumberland-Peterborough South, and St. John-Rothesay in New Brunswick, according to Kashani’s data.

The second eight that the NDP can claim from the Tories are Coquitlam-Port Coquitlam, Cariboo-Prince George, Mission-Matsqui, and North Okanagan-Shuswap in B.C., Regina-Qu'Appelle in Saskatchewan, Edmonton Griesbach in Alberta, and Essex in Ontario.

Kashani’s message was echoed by electronica star Grimes, who urged her fellow Canadians to vote strategically against Harper, posting a list of the 16 ridings on her Tumblr blog.

“I’d really like to encourage all Canadians to vote in the upcoming federal election, which may be one of the most important in Canada’s history,” said Grimes in a 15-second video post on Tumblr.

So far Canadians are heeding the appeals of Grimes and others to vote: Elections Canada reported that roughly 3.6 million electors voted at advance polls held from Oct. 9-12. This represents an increase of 71 per cent over the number of electors who voted at the three days of advance polling in 2011.

Maggi said that such high turnout historically spells trouble for incumbent governments, adding that roughly 70 per cent of Canadians are seeking to change their government in this election.

It may also be reason to celebrate for many people come Oct. 19, as roughly 331,000 Canadians have now signed up on Facebook for the ‘Stephen Harper Going Away Party’.

Event founder Chris Drennan said that his page had likely encouraged people to get out and vote at advance polls.

“I think it has helped a bit, [and] the fact that the numbers were way up for the advance polls is a good sign. People having to wait in lines for their turn to vote is a very good sign,” Drennan told National Observer.