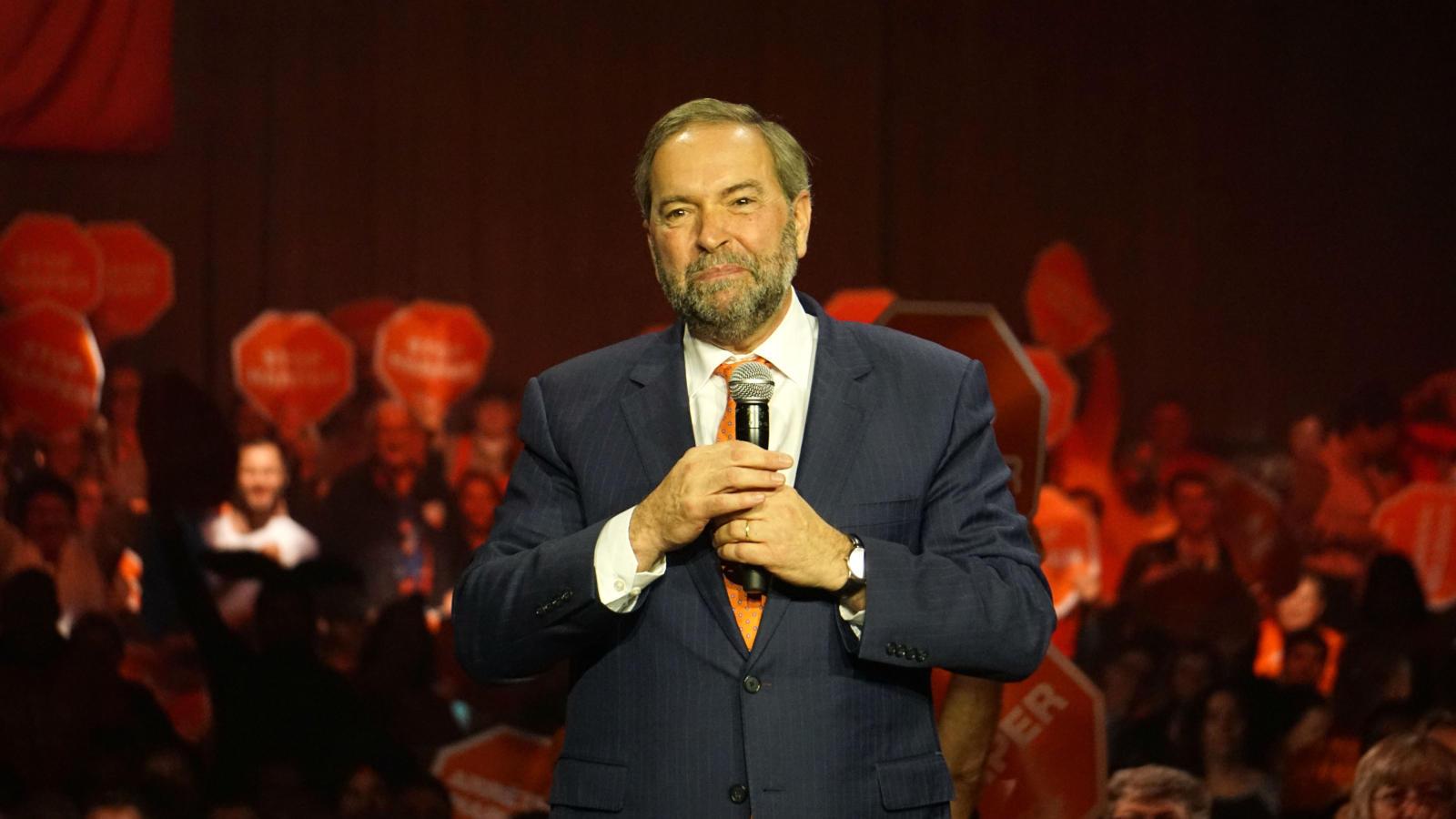 "From the beginning, this election was about change,” Tom Mulcair told a teary-eyed crowd of orange supporters in Montreal on Oct. 19. His election night headquarters were quiet on Monday as Justin Trudeau’s Liberals celebrated their victory at the nearby Fairmont Queen Elizabeth Hotel.

The NDP leader — once poised to be Canada’s next prime minister — lost more than half of his seats in the House of Commons to the Liberal tide that washed over Canada. The party also lost its Official Opposition status to the Conservatives, who finished with 99 seats to their 44.

It was a biting end.

But Mulcair acknowledged what was, inherently, a victory for nearly 70 per cent of Canadians who polled in support of a government swap in Ottawa at the start of the election campaign. After all, the NDP fought fiercely for 78 days with orange “Stop Harper” signs, and that is precisely what happened.

“Tonight, Canadians have turned the page on 10 long years and have rejected the politics of fear and division,” he told his audience, promising to put the new government’s feet to the fire in the interest of all Canadians, particularly women and minorities.

Somehow, his words didn’t capture the disappointment that comes with losing every NDP incumbent in Atlantic Canada, a 48-seat reduction in Quebec, and the first race in Canadian history that could have produced an NDP government.

Was Mulcair's early success simply too good to be true?

There are several theories behind his jump from first to last place in the polls under the wire, turning what was once the rolling 'orange crush' into the into the toppling 'orange crash.'

The NDP have always been Canada’s progressive party, reaching for the political left under the banner of democratic socialism. In 2011 however, when late leader Jack Layton launched the party into the role of Official Opposition, the NDP started inching towards the centre to identify with a wider Canadian audience.

And it worked — under Mulcair’s leadership, the party grew more powerful through its slight political shift. But according to University of Toronto political science professor Chris Cochrane, the move created a branding issue the NDP couldn’t fix.

“The reality is one thing, but that narrative was another,” he told National Observer. “The narrative in this election was that the Liberal Party had outflanked the NDP and became the party for progressive Canadians.”

“The message that the NDP couldn’t effectively counter was the argument that there was something inherently progressive about running deficits,” he explained.

But the NDP also made the same baseline mistake as the Conservative Party in #elxn42 by underestimating the viability of Justin Trudeau.

The young leader’s political reputation increased exponentially over the course of the 78-day campaign, said former NDP organizer Gerry Caplan — in part due to the low expectations people had of him from the very beginning.

“The results of the first debate were not what everyone expected,” the policy analyst explained. “Mulcair, who had been so wonderful in the House of Commons, somehow did not come off as well, and Trudeau — who was barely able to show up in short pants — in fact, performed perfectly well.”

The Liberals had nowhere to go but up from there. Combine Trudeau’s charisma and flashy presentation with a timid, ‘better safe than sorry’ NDP platform, and you have a perfect opportunity for the Liberals to capitalize on the rhetoric historically associated with the New Democrats.

Lowballing Trudeau — and by extension the Liberal campaign — was a mistake the NDP should never have made, according to public affairs consultant and former journalist Robin Sears.

“There wasn’t anything particularly progressive about the Liberal platform,” he told National Observer. “The degree to which the Liberals always play the stunt of campaigning from the left and governing from the right goes back to Mackenzie King.”

It was a predictable move, especially given that Mulcair's party had branded itself as less "radical" than the NDP of old, with its focus on a balanced budget. Trudeau was able to present himself as the “more effective Harper killer,” said Sears, and the orange crush started its steady crash into the shoreline.

“They underestimated Trudeau, as many people including most of the media did,” he explained. “That’s always a mistake, and as a result, they didn’t attack him sufficiently, strongly early enough to blunt his momentum.”

And there's something else the NDP failed to attack sufficiently that ultimately contributed to their third-place finish: the race-baiting politics of Stephen Harper and his Tory campaigners.

“The niqab was the final nail in coffin,” Caplan confirmed. With Quebec as his primary base of power, Mulcair had much more to lose from the niqab plank than his rival Liberals.

It’s a province where contention with all things religious is at its highest in Canada, and in 2011, the NDP snagged most of its Quebec seats from the Bloc Québécois. Keeping those Bloc voters, who are generally more susceptible to anti-niqab rhetoric, meant taking a strong stance against the niqab during the oath-swearing at Canadian citizenship ceremonies.

"I am in agreement with the existing rule under which anyone seeking citizenship must uncover their face to identify themselves before swearing the oath, in accordance with their religious beliefs," he said during a mid-September speech in Montreal.

He later continued to tell audiences that “no one has the right to tell a woman what she must — or must not — wear,” and confirmed to the CBC that an NDP government would not pursue the issue with the Supreme Court of Canada.

The orange leader has already come under fire for political pandering during the election campaign amidst accusations of changing his message for French and English audiences.

But he stuck to his guns on the niqab debate. It was a courageous gamble that didn’t pay off.

“Once it was widely apparent that the NDP was losing its Quebec base, the prospect of the NDP being the party most likely to get rid of Harper suddenly collapsed totally,” said Caplan.

Mulcair should have gone after Harper more vehemently for playing race-baiting games during the election, added Spears.

“The niqab was a very successful example of race and ethnic politics of the type we hadn’t seen in Canada before,” he said. “I don’t think the NDP or the Liberals were as effective in crushing the Tories for such use of toxic messaging as they should have been.”

Perhaps the niqab really was the nail in the coffin or perhaps Mulcair’s Quebec coalition was unsustainable and doomed to fall apart at one point or another. Either way, NDP support dropped in the polls from the moment the Conservatives played the niqab card.

Yet despite what would genuinely seem an 'orange crash' in Monday's election, it's important to note that the NDP still had its second best result in history: they retained 44 seats in the House of Commons, captured 19.71 per cent of the vote, and ran a campaign with more female and Indigenous candidates than any other party has ever done before.

At his quiet party in Montreal on Oct. 19, Mulcair thanked his candidates and supporters for their hard work, and outlined what promises to be a very bright future for the NDP in the House of Commons.

“We will be unwavering in our pursuit of better health care for Canadians, we wil stand strong in our fight against climate change, and to protect our land, air and water," he said.

“We will be resolute in our efforts to build a true nation-to-nation relationship with First Nations, Inuit and Métis peoples. It’s on these priorities and many more that New Democrats will make real, lasting progress in this new parliament.”

When it comes to the prospect of future government leadership, the NDP still have a good chance. Their support won't be skyrocketing any time soon, said Cochrane, but after months of chronically underestimating Trudeau, Canadians' expectations of the new prime minister will be high.

If the Liberal leader fails to deliver, the disappointment will be historic.

“If he disappoints people, and [it's] inevitable he will at some point — if he isn’t the progressive candidate that a lot of New Democratic voters hope that he is, this makes more room for the NDP to be the progressive voice for Canadian politics,” he explained.

It's all about political identity: left, right, centre, conservative and progressive.

"Increasingly, people speak about Canadian politics in these terms,” Cochrane told National Observer. “To the extent that the parties are able to tap into that, I think they’ll succeed. If they run bland campaigns and lack identity in these terms, I think they run the risk of experiencing exactly what the New Democrats did in this election.”