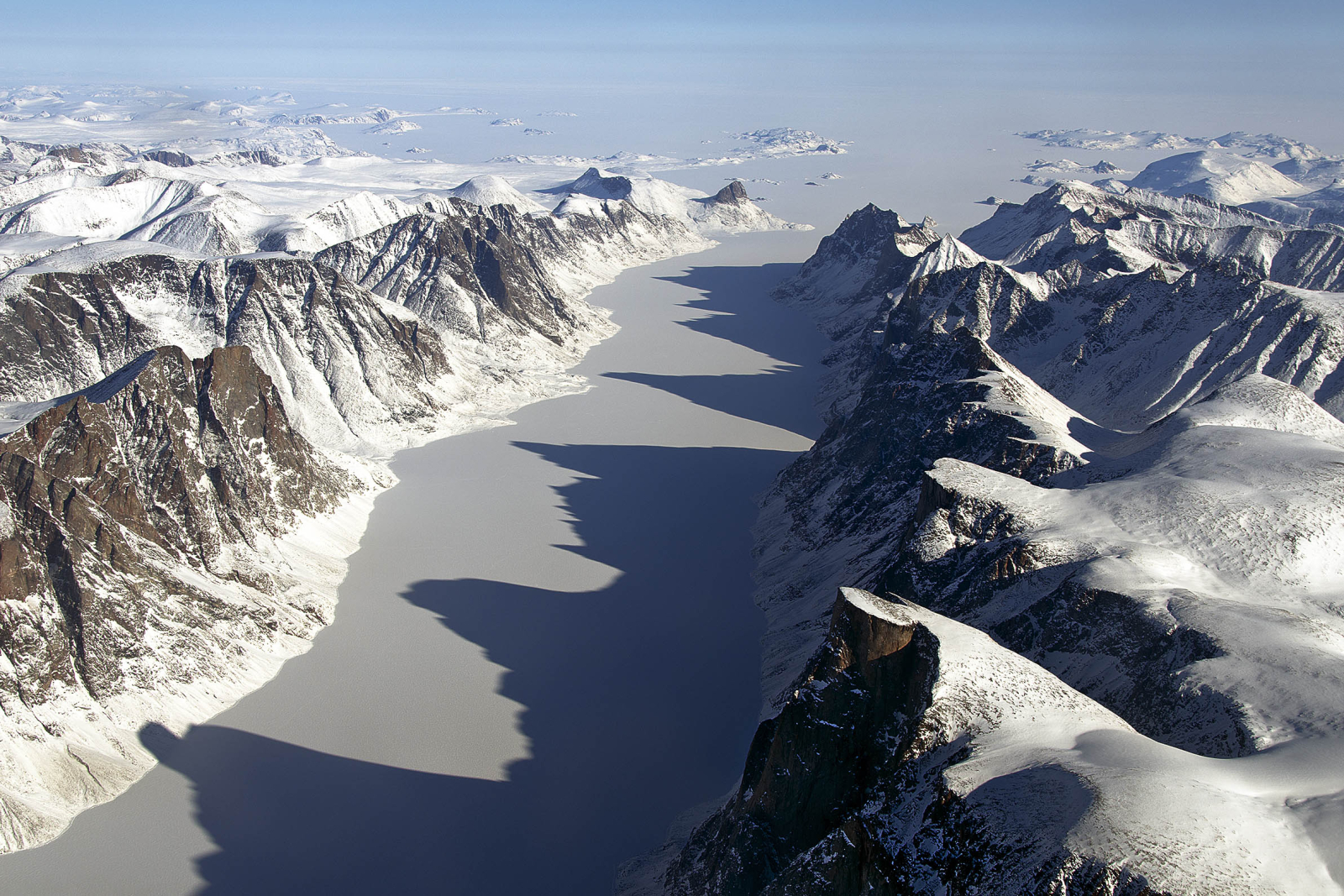 A fjord on Baffin Island looking east towards the Davis Strait, an area of shoreline now endangered by seismic drilling for oil. (from Wikimedia Commons).
Previous story
Next story

A battle between a tiny Nunavut hamlet and three companies carrying out seismic drilling in Arctic waters is shaping up to be Justin Trudeau’s first major environmental challenge.

The community of Clyde River filed its latest legal action with the Supreme Court of Canada just three days before the Oct. 19 election. The filing followed the Federal Court of Appeal's rejection of a previous motion by the community— against the National Energy Board’s (NEB) 2014 decision to allow oil exploration companies to conduct blast tests in Davis Strait along the coastline of Baffin Island.

The immediate priority remains stopping the literally earth-shattering sounds of underwater blast cannons from devastating Arctic communities and the marine mammals that serve as their food source. Powerful shockwaves from blast guns can injure, kill, or disrupt the navigation patterns of those animals upon which the Inuit rely for food.

“Seismic blasts are loud — in fact, they're the second loudest man-made sound ever created, second only to the atomic bomb," said Jessica Wilson, head of Greenpeace Canada’s Arctic campaign.

"[The blasts are] up to and sometimes over 260 decibels below the surface, which is eight times louder than a jet engine heard 50 metres away on land. Sounds at this level can burst human ear drums, but whales are much more sensitive to sounds than we are,”

According to Wilson, seismic blasts under water can cause whales to experience temporary or permanent hearing loss, which impacts nearly every aspect of their daily activities – navigating, communicating, searching for food – as like all marine mammals they rely on echolocation.

Also at risk from blasting are narwhals, ringed seals, and the bowhead whale, all animals which Clyde River’s court application states that Inuit rely on for their not only their food sources but also their economy and culture. Their loss would cause irreparable damage to Baffin Island’s already-isolated communities.

“We have also heard powerful stories from people in Clyde River, passed down through generations, about the impacts of seismic blasting that they saw first-hand in the 70s and 80s when seismic blasting last took place in Baffin Bay," Wilson said.

"Hunters tell of deaf polar bears, of seals with bleeding ears, of narwhals trapped in ice. And when an animal is hurt, Inuit will not hunt it. This becomes about the basic human right to eat, to live off the land as they have since time immemorial, rights that are enshrined in our constitution.”

“Our traditional knowledge and modern scientific data both teach us that seismic blasting is harmful for marine mammals, but federal authorities have chosen to ignore these facts. Instead, they have pushed ahead with this oil exploration project without our consent or adequate consultation,” said Natanine.

“The Liberal party has said there has to be a balance between development and protecting the environment," said Nunavut’s Liberal MP-elect Hunter Tootoo in a September interview with the Nunatsiaq News. "Most people look at Harper and the Conservative government as lapdogs of industry. The perfect example of that is Clyde River and seismic testing."

"They were crying for help from their MP [Leona Aglukkaq], who was our environment minister, and there wasn’t a word heard. They had to go to court to try to be heard."

Both Tootoo and the Liberals have promised greater consultation with First Nations communities before approving any major energy project, while Trudeau has previously pledged an immediate public review of Canada’s environmental assessment process, including reforms to the NEB that outgoing PM Stephen Harper stacked with members linked to the oil industry.

“Trudeau has said that it’s the government that grants the licenses, but the communities that grant permission," said Tootoo. "Also, Trudeau wants to review the whole regulatory regime to ensure the Crown’s obligation to consult with Aboriginal people is honoured and respected.”

Liberals "spoiled for choice" in showing their true colours

While Harper's Conservative government remained fixated on oil and gas exploitation during his decade-long rule, Greenpeace worked with both Inuit and other First Nations communities to develop solar energy projects, slowly weaning them off fossil fuels and the greenhouse gases they produce.

That includes Clyde River, where Greenpeace, in partnership with the Vancouver Renewable Energy Co-op assessed the solar potential of three community buildings and one private home, aiming to install the hamlet’s first-ever photovoltaic energy unit next year.

“We would certainly hope the Liberals would see the value and wisdom in supporting the development of solar power in northern communities, [and] anything that reduces the extreme cost of living in the Arctic, while reducing community dependency on expensive and dirty diesel. Solar panels are a win-win-win situation for communities, government and industry — and of course, the climate,” said Greenpeace's Wilson.

Trudeau’s Liberals are starting to take notice: his party is promising to phase out subsidies for oil sands development and invest in renewable energy development, finally giving federal support to a rapidly-emerging industry that the Conservatives ignored.

“We certainly hope that Trudeau will want to distinguish himself from Harper's legacy of mismanagement on climate and Arctic issues," Wilson said.

"He'll have an opportunity to do that at the climate meetings in Paris, but that work starts here at home. From the tar sands to the Arctic, there is plenty of room for the Liberals to show climate leadership, and Trudeau only has to look to our southern neighbours for examples. On the back of Shell's retreat from the Alaskan Arctic, President Obama recently took aim against Arctic drilling in the US by cancelling existing oil leases and future lease sales."

But the situation in Canada’s Arctic remains grim for environmentalists: on top of oil exploration along Baffin Island, BP and ExxonMobil have partnered with Imperial Oil and are seeking to drill in the Beaufort Sea.

Wilson said that the Harper government was prepared to change federal laws to make drilling possible for Imperial Oil, at the cost of hundreds of millions in taxpayers’ money. She said she hopes the Liberals undertake a different policy regarding Arctic oil exploration.

“So yes, the Liberals are spoiled for choice when it comes to showing Canadians that people matter to them more than corporate profiteering — that would certainly [mean] distinguishing them from the Conservatives,” said Wilson.