Environmental advocates call for a full stop, not a "pause," of Keystone XL 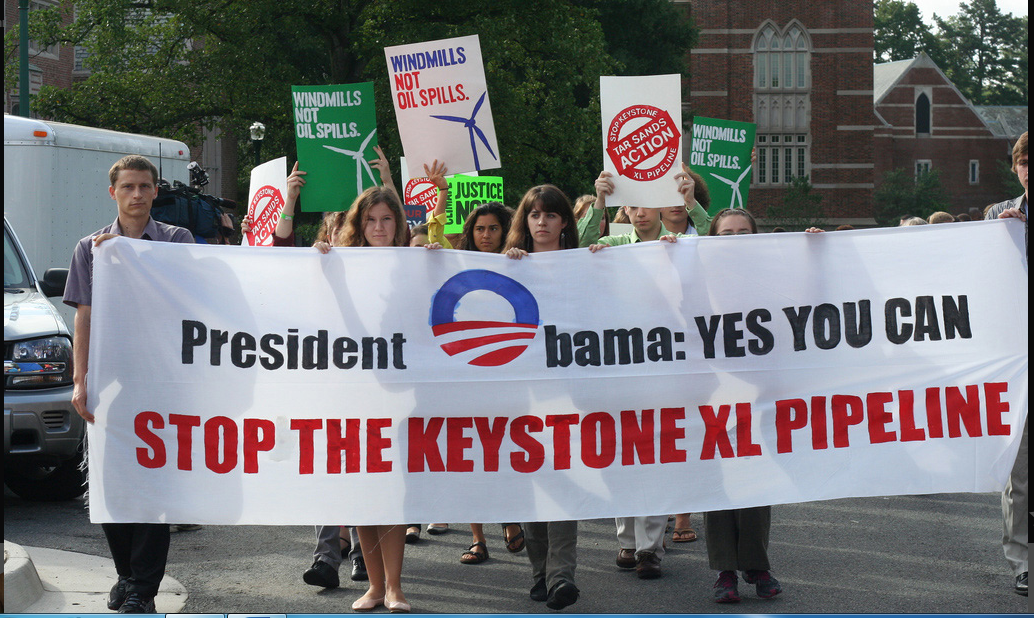 TransCanada’s request Monday to have the Obama administration “pause” its review of the controversial Keystone XL pipeline drew scorn from American environmental groups.

Environmentalists called it a “desperate attempt,” and said the company is scrambling to try and fend off the expected presidential rejection of the project in the next few weeks and hold it over until the 2016 elections are completed.

Stalling the project until after the election would be a gamble on TransCanada’s part that a Republican government favourable to the pipeline would come into power.

“This is President Obama’s decision, and he shouldn’t have to cave to a foreign oil company trying to twist his arm into punting it to future presidents,” said CREDO Climate campaigns director, Elijah Zarlin in a statement Monday evening.

“After nearly seven years of trying to force the president’s hand to approve the Keystone XL pipeline, TransCanada is now desperately trying to block President Obama from even making a decision at all.”

As CREDO noted in a release, in the two weeks since Stephen Harper lost the Canadian election, more than 100,000 people have signed their action petition urging Obama to reject the pipeline.

“TransCanada sees the writing on the wall, and is trying to suspend the permit process for the Keystone XL pipeline in hopes that the next president will not make a decision based on climate science,” said Michael Brune, executive director of the Sierra Club, in a statement.

“President Obama has all the evidence he needs to reject Keystone XL now, and we are confident that he will.”

Anthony Swift, director of the Canada Project for the Natural Resources Defense Council, also said the pipeline should be rejected on the grounds that it would have a negative impact on climate change.

“Altering its route through Nebraska isn’t going to change that. Keystone XL isn’t in the national interest and the president should reject it.”

The Washington Post reported Monday evening that the Obama administration is preparing to reject a cross-border permit for Keystone. The paper cited “several individuals who have been briefed but spoke on the condition of anonymity because the White House’s decision has not been announced.”

However, during a press scrum yesterday on Airforce One, a White House spokesman asked directly about a decision on the pipeline said the expectation is that Obama will make an announcement before the end of his administration on Keystone XL. Asked if that decision might come down in 2015, the spokesperson replied: "It's possible. It's also possible it could happen next year."

TransCanada released third-quarter results for the company Tuesday. The company reported that as of September 30, 2015, it has invested US$2.4 billion in the pipeline project.

In January 2015, Keystone XL initiated eminent domain actions against Nebraska landowners. The landowners launched a court challenge, challenging the actions on grounds that it violated the Nebraska constitution.

Keystone withdrew its eminent domain actions in October and moved to dismiss the constitutional court proceedings. A decision on the issue is expected in the next few months.

TransCanada requested the pause after filing an application for a rerouting approval through Nebraska. The company said it expects the Nebraska Public Service to make a decision about the route by the third quarter of 2016 and therefore wanted the pause while waiting for approval of the route.

In April 2015, TransCanada cancelled its Energy East marine and tank terminal in Cacouna, Quebec after a reclassification of beluga whales as an endangered species. The company said it expects to submit amendments to the project to the National Energy Board in fourth quarter 2015.

As result of the changes, TransCanada is predicting a start date of 2020 for Energy East and noted that the original $12 billion cost estimate is expected to increase.

The company attributed the “resilience” of its operations to a diversified asset base.