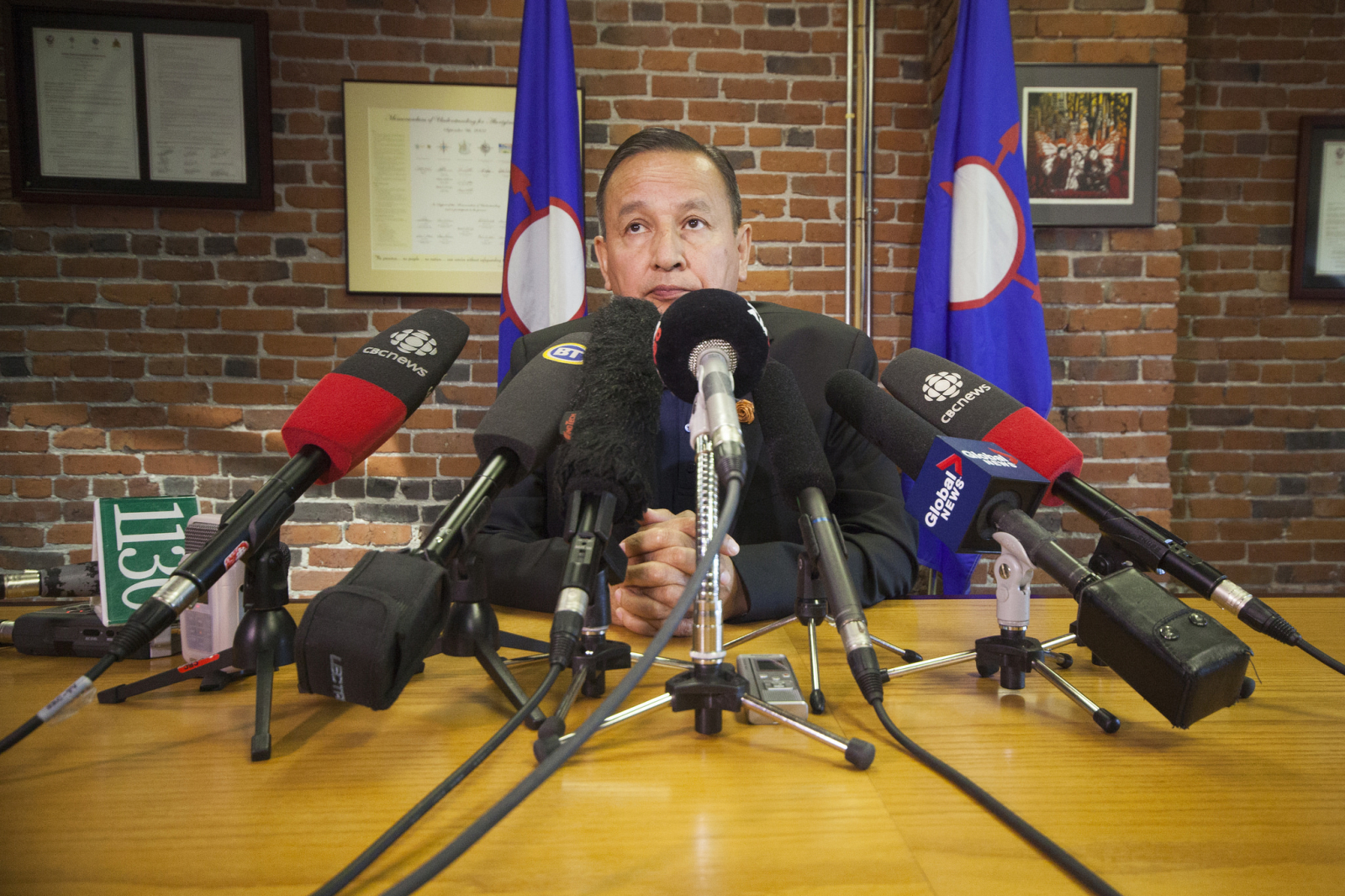 Trudeau’s new ministers — half of whom are women — include a diverse representation of Canadians from every province and one territory, and two Indigenous MPs.

Representatives of First Nations Summit, Union of BC Indian Chiefs (UBCIC), Inuit Tapiriit Kanatami, BC Assembly of First Nations (BCAFN), and Congress of Aboriginal Peoples all issued statements in support of the cabinet, which has 11 ministers from Ontario, six from Quebec, three from British Columbia, two each from Alberta and Manitoba, and 1 each from Saskatchewan, Nova Scotia, Newfoundland and Labrador, Prince Edward Island, and Nunavut.

“I am encouraged to see the level of diversity and exceptional qualifications of this Cabinet,” said Inuit Tapiriit Kanatami President Natan Obed, who attended the swearing-in ceremony early on Nov. 4.

He specially acknowledged the appointment of Hunter Tootoo as Minister of Fisheries and Oceans and the Canadian Coast Guard.

“Having an Inuk in this foundational portfolio is an excellent step for Canada,” said Obed. “Minister Tootoo and I have a long-standing relationship and I hope to build collaboratively with him to ensure a strong, National Inuit voice so that our communities can thrive.”

Tootoo has held numerous cabinet positions in the past, including Minister Responsible for the Nunavut Housing Corporation, Homelessness, the Qulliq Energy Corporation, and Minister of Education respectively. He served Iqualit as an MLA in 1999 and was Speaker of the Legislative Assembly until 2013.

Wilson-Raybould is a member of the We Wai Kai Nation, a former Crown prosecutor, treaty commissioner and regional chief of the BC Assembly of First Nations.

“Puglaas [Wilson-Raybould] has been and continues to be one of our great leaders from BC and she will meet and exceed any challenges that face her in her new role as Minister of Justice and Attorney General of Canada,” said Shane Gottfriedson, regional chief of the BCAFN, in a statement.

“It is an incredible day!” added Grand Chief Stewart Phillip, UBCIC President. “Jody Wilson-Raybould is an excellent choice as Attorney-General and Minister of Justice.”

All supported the selection of Toronto-St Paul’s MP Carolyn Bennett as Minister of Indigenous and Northern Affairs, who has worked as a family physician, an assistant professor of medicine at the University of Toronto, and has previously served as Canada’s first Minister of State for Public Health, and the Liberal Critic for Aboriginal Affairs.

“We look forward to meeting with Prime Minister Trudeau and Dr. Carolyn Bennett… to discuss how we can work together in an effort to close the appalling and disproportionate socio-economic gaps faced by our communities and citizens,” said Robert Phillips of the First Nations Summit Political Executive.

In a pre-election letter to the FNLC dated October 8, 2015, the Liberal Party of Canada outlined a detailed Aboriginal agenda including commitments to:

Indigenous organizations across Canada have promised to actively engage the new prime minister and cabinet, and hold them accountable to deliver these commitments.

Canada no longer a party of one