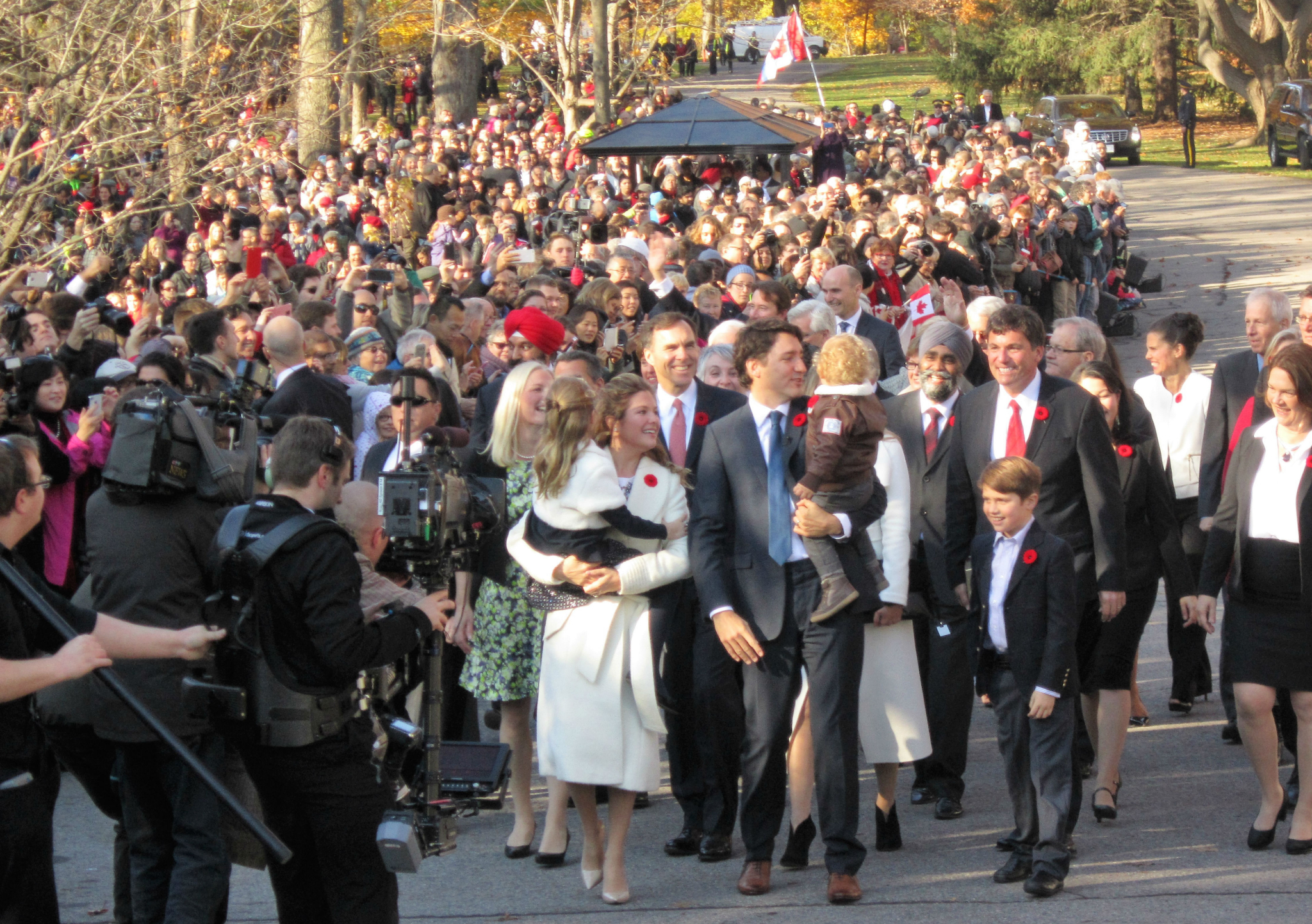 Justin Trudeau approaches Rideau Hall in Ottawa to be sworn in as prime minister on Nov. 4, 2015. Photo by Fram Dimshaw.
Previous story
Next story

Justin Trudeau walked up the tree-lined path to Rideau Hall to a hero's welcome from a huge crowd of people, flanked by his wife Sophie Gregoire, their children and his top Liberal lieutenants. Spectators represented a mosaic of Canadian culture, from recently-landed Filipino immigrants to retired public servants.

As Canada's 23rd prime minister, Trudeau defeated Conservative Stephen Harper in a landslide victory on Oct. 19, who governed Canada for nearly a decade. While credited by supporters for steering Canada through the global financial crisis, Harper was also criticized for undermining environmental laws in the pursuit of oil and gas projects.

Trudeau also announced his 30 cabinet ministers, 15 of whom are women.

"Canadians from all across this country sent a message that it is time for real change, and I am deeply honoured by the faith they have placed in my team and me," he said in a statement to the country after the swearing-in ceremony. "Today we have the pleasure of introducing the team of extraordinary Canadians who will serve in the new Ministry.

"This strong, diverse, and experienced team will serve all Canadians, and for the first time in our country's history, there will be an equal number of women and men around the Cabinet table."

The Honourable Lawrence MacAulay
Minister of Agriculture and Agri-Food

The Honourable John McCallum
Minister of Immigration, Refugees and Citizenship

The Honourable Carolyn Bennett
Minister of Indigenous and Northern Affairs

The Honourable Scott Brison
President of the Treasury Board

The Honourable Catherine McKenna
Minister of Environment and Climate Change

The Honourable Amarjeet Sohi
Minister of Infrastructure and Communities

The Honourable Carla Qualtrough
Minister of Sport and Persons with Disabilities

The Honourable Hunter Tootoo
Minister of Fisheries, Oceans and the Canadian Coast Guard

The Honourable Patricia A. Hajdu
Minister of Status of Women

The Honourable Bardish Chagger
Minister of Small Business and Tourism

Trudeau's Liberals won a strong majority of 184 seats in last month's election, with representation in every province and one territory. His cabinet reflects that, with 11 ministers from Ontario, six from Quebec, three from British Columbia and two each from Alberta and Manitoba. Saskatchewan, Nova Scotia, Newfoundland and Labrador and Prince Edward Island all have a single representative in cabinet, as does Nunavut.

Eighteen of the newly minted ministers are rookies who won election for the first time, including the finance minister, millionaire Toronto businessman Bill Morneau.

Two others are relative newcomers as well; former journalist Chrystia Freeland, who won a by-election in Toronto two years ago, will head up international trade, while Navdeep Bains, a former MP who was defeated in 2011, becomes minister of innovation, science and economic development.

Trudeau has put newbies in most of the senior portfolios, some of which have been reconfigured or renamed.

In his statement, he said this government is the best representation of the people it is meant to serve, and promised to make good on election commitments to renew partnerships with Indigenous people, tackle climate change, create jobs, and care for veterans.

"We are committed to both the security and safety of Canadians and the protection of their rights and freedoms," he said.

"Canadians expect to see their values and priorities reflected in their government, and we have listened closely to them. Canadians told us what kind of government they want, and we built the plan to make it happen."

The prime minister is seen in this video welcoming new Environment Minister Catherine McKenna, and renewing Canada's commitment to a cleaner, greener future:

NDP leader Tom Mulcair congratulated the new prime minister on taking his oath of office and appointing a new cabinet based on the concept of gender parity:

“I look forward to working with Prime Minister Trudeau to help bring change to Canadians,” he said in a statement. “Gender parity in Cabinet is a good first step and should be congratulated, but achieving fairness and equality for all Canadians is a long-term goal that requires hard work. I look forward to pressing the new Prime Minister and his cabinet on their progress.”

His party however, was disappointed that the cabinet was so large. The New Democrats will meet in Ottawa today to discuss strategies for holding the new ministers to account on issues including greenhouse gas reduction targets, First Nations relationships, access to health care, revising the current electoral system, and resettling 25,000 Syrian refugees.

- With files from Canadian Press.