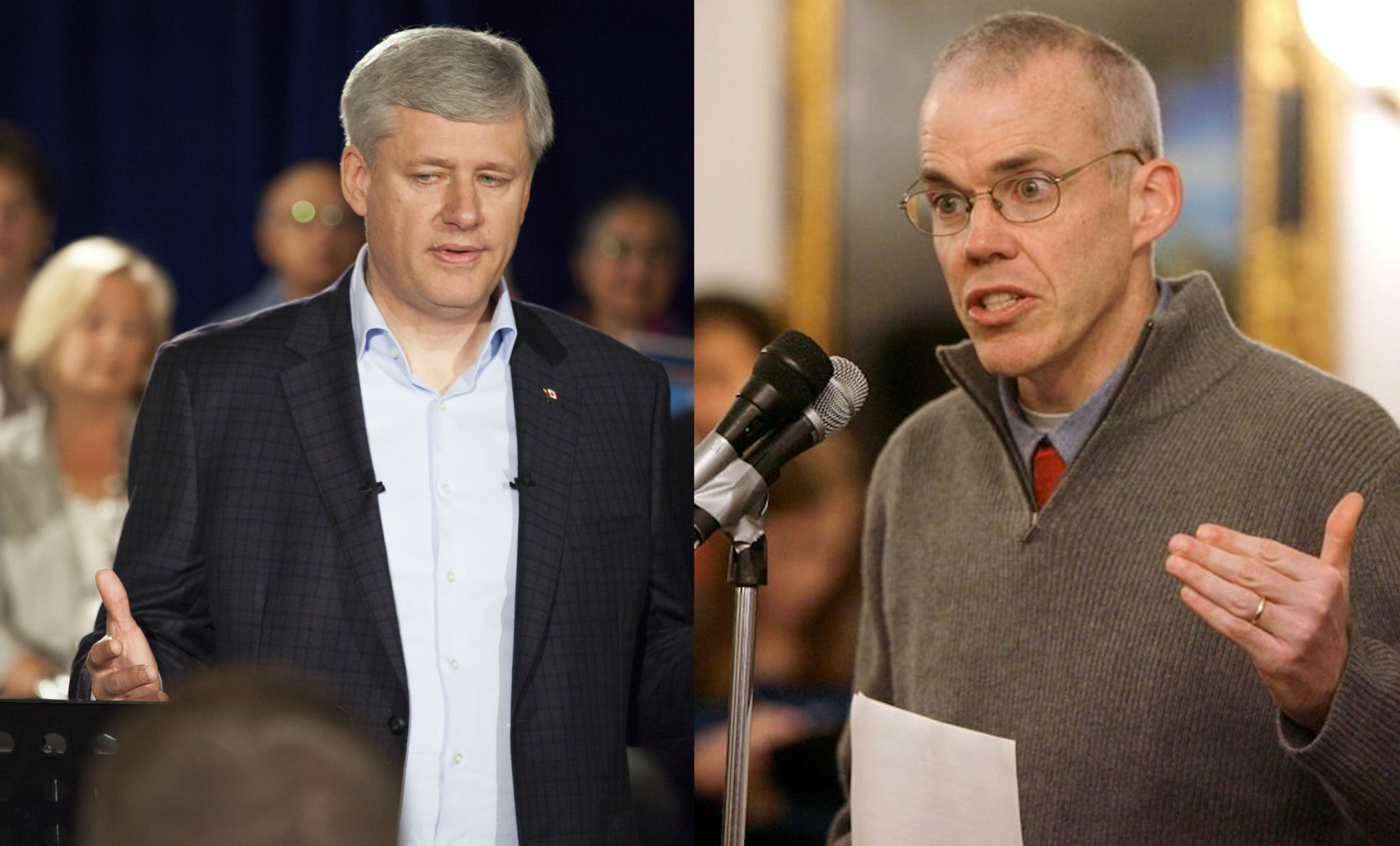 WASHINGTON — One of the great ironies of the interminable saga of Keystone XL is that two of its principal antagonists were unaware that they went to grade school together.

In the midst of one of the biggest environmental fights in American politics, the best-known activist on one side learned of his distant connection to the most powerful politician on the other: Stephen Harper.

So these old grade-school alumni duked it out from a distance as the pipeline escalated from a regional land dispute to international cause celebre, climate-change battle line, and irritant in Canada-U.S. relations.

Bill McKibben is amused to hear pro-pipeline politicians in Canada deride opponents like him as foreign radicals. McKibben quipped in an interview: "I had exactly the same upbringing as Stephen Harper."

The Vermont environmentalist spent his elementary-school years in Toronto, during his father's posting as a business journalist. He never got to know the future prime minister, who was a year ahead at Northlea Elementary.

This is the story of how they became rivals.

Like many others in the environmental movement in 2011, McKibben was dejected at the collapse of a cap-and-trade bill in the U.S. Congress and disillusioned with President Barack Obama for failing to make it a priority while his party still had control of Congress.

A eureka moment occurred that June.

It was triggered by a journal article from climatologist and former NASA scientist James Hansen, titled "Silence is Deadly." It sounded the alarm on a pipeline that would carry nearly one-quarter of Canada's oil.

"If this project gains approval, it will become exceedingly difficult to control the tar sands monster," Hansen warned.

McKibben was a longstanding Hansen admirer.

His Rockefeller-funded climate-change group, 350.org, was even named after Hansen's work, a reference to the make-or-break level for carbon in the atmosphere at 350 parts per million.

He spotted a political opening.

The pipeline needed a cross-border permit, which meant it was a rare issue beyond the control of a hostile U.S. Congress, and could be determined by the one person with the power to approve or reject that international permit: the president.

He'd already heard allies describe oilsands impact on First Nations land. But he'd never made the connection between their issue and climate change — until he saw Hansen's paper. He called Tom Goldtooth and Clayton Thomas Muller in Canada and asked if they would mind him taking up the cause.

''They graciously did not say anything about our coming late to the battle and instead said, 'Sure.'''

So McKibben wrote a letter inviting people to come to Washington and engage in civil disobedience. It was signed by a number of activists, including Canadians Naomi Klein and David Suzuki.

"Far more people responded than we imagined would."

More than 1,250 people were arrested outside the White House over a two-week period before Labour Day 2011, including McKibben. Celebrities got involved: Leonardo DiCaprio, Daryl Hannah, Mark Ruffalo and Danny Glover. Nobel Peace Prize winners including Desmond Tutu and Jimmy Carter urged their fellow laureate — Obama — to turn down the project.

Government types still grumble that the pipeline company had a tin political ear. Calgary-based TransCanada Corp. ignored local concerns in Nebraska, they say, and it took too long to get Montana and North Dakota onside by taking in some U.S. oil. However, people close to the company have blamed the Harper government for antagonizing environmentalists.

But the real pressure on Obama was domestic.

It came from within his own party, on multiple fronts. Anti-Keystone editorials appeared in the New York Times. Young Democrats now frown at mentions of Canada's "tar sands." Huge political donations poured in from California environmentalists, including former hedge-fund manager Tom Steyer.

If he helped lead the national fight, she'd been its earlier champion in Nebraska.

The Democratic party activist had moved to her husband's home state and started the political group Bold Nebraska. She'd been planning to work on immigration or education reform and initially considered environmentalism too granola of an issue to take up in conservative cowboy country.

It's true that the initial opposition had nothing to do with climate change. The project's first opponents were ranchers and they worried about water contamination.

An early press report mentions everything but greenhouse-gas emissions. The Norfolk Daily News piece in 2009 refers to sensitive species in the area: the piping plover, the river otter, and a list of other creatures.

Kleeb was invited to a town-hall-type meeting. By the end, she'd decided to promote the ranchers' cause: "(I) said, 'We have got to organize on this issue.'"

She prepared colourful protests, arranged national media interviews, and introduced landowners to the lawyers who later delayed the project in state courts. It still faces legal obstacles in Nebraska.

Most landowners on the route eventually signed on. But a minority continued to hold out, even as cash offers from TransCanada multiplied five, six, seven times.

Amid lawsuits and re-routing, project costs skyrocketed. They increased by almost half to $8 billion — profiting lobbyists, lawyers, ad salesmen, pipe-storage yards, even landowners who got cash upfront but never had to lay a yard of pipe.

Obama gradually toughened his tone. He'd actually held a re-election-year event at a TransCanada facility in 2012. But the politics shifted. He hired John Podesta. An anti-pipeline environmentalist who has been a top aide to both Bill and Hillary Clinton, Podesta joined the White House to co-ordinate Obama's climate efforts.

Obama became dismissive of the project's potential benefits for Americans. In doing so, he ignored inconvenient details — like how it would carry 100,000 barrels per day of U.S. oil; pump tax revenues into the counties and towns along the route; and, according to his own government's analysis, would actually reduce emissions.

But does rejecting Keystone help — or harm — the climate?

Obama's own State Department concluded that greenhouse gases would be up to 42 per cent higher if that same oil was shipped by rail. But the politics changed. Oil prices plunged. U.S. production rose. Americans stopped worrying so much about their energy supply. And the assumptions in that State Department review were derided as out-of-date.

But the Keystone fight, McKibben said, is really just a short-term tactic. The broader goal is to block the construction of oil infrastructure, for a faster transition toward new energy sources.

"I understand Canadian politics just enough to know that petrocrat Stephen Harper is out of a job," McKibben tweeted as the federal election results rolled in.

"No one could deserve it more."