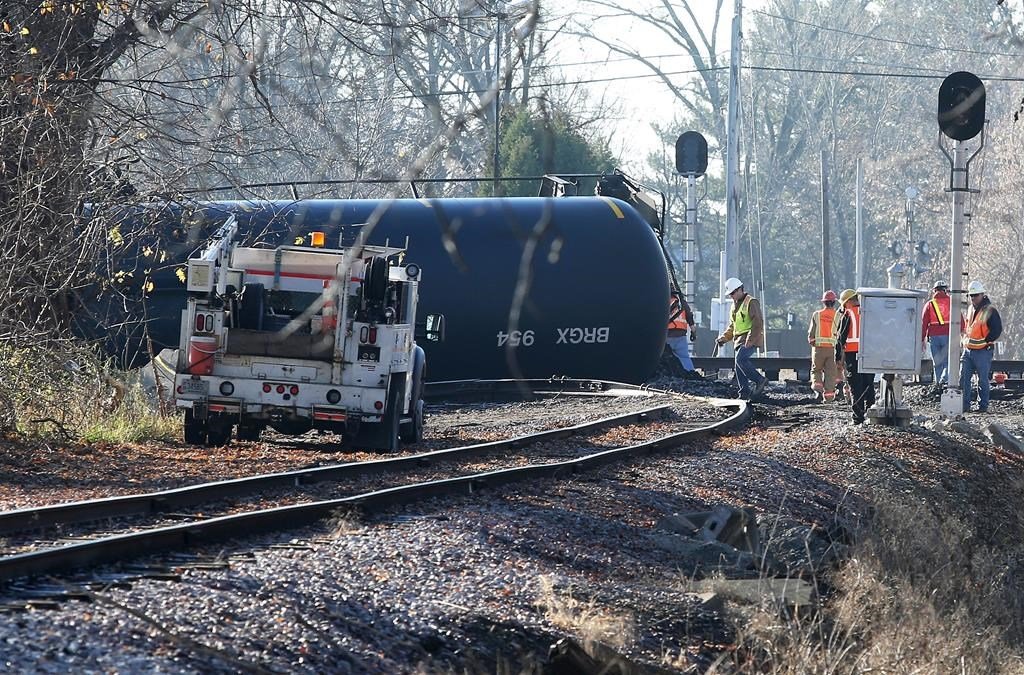 More than a dozen cars of a Canadian Pacific Railway train loaded with crude oil jumped the tracks in Watertown on Sunday afternoon, puncturing one car that spilled hundreds of gallons of its load and caused the evacuation of a neighbourhood in the small southern Wisconsin city.

Residents who evacuated dozens of homes were still being kept away Monday as 12 derailed cars were moved to a temporary track. Thirteen of the train's 110 cars derailed, and 109 of them were carrying crude oil, officials said.

Crews were dismantling and removing the car that was punctured, Canadian Pacific spokesman Andrew Cummings said, adding that it spilled no more than 1,000 gallons. The railroad said the leaking car was sealed, the oil contained and siphoned off, and that none of the product reached any waterways.

It was the second freight train derailment in as many days in Wisconsin. On Saturday, 25 BNSF train cars including tankers derailed, spilling as much as 20,000 gallons of ethanol from five tankers along the shores of the Mississippi River into the waters near Alma in western Wisconsin.

BNSF said railroad crews stopped the leaks from five tanker cars and placed containment booms along the shoreline. BNSF said there was no evidence of environmental damage and that trains should be able to use the tracks by Monday evening.

Watertown is about 50 miles west of Milwaukee; Alma lies about 90 miles southeast of Minneapolis.

Federal Railroad Administration regional administrator Steven Illich said there was no reason to believe the Watertown derailment was anything but an accident. He said investigators will look at key areas including the track and the train cars' wheels.

The tank cars involved in both Wisconsin derailments are being phased out, the agency said.

FRA spokesman Matt Lehner said the tank cars in the Alma derailment were older, "legacy" tank cars. Cars in the Watertown derailment also would be phased out under a May rule from the Transportation Department, although those cars were built under a voluntary industry standard adopted in 2011. Those cars were equipped with steel shields attached to the ends of each car to decrease the chances of a rupture during a derailment. The Alma cars did not have those shields.

Watertown fire chief Gregory Michalek said Monday that residents who evacuated 35 homes following the spill cannot return home until the cleanup is complete. They were escorted to their homes by officials late Sunday to retrieve pets, medicine and clothes. Officials will re-evaluate the situation in Watertown on Monday evening, Michalek said.

Accidents involving shipments of hazardous fuels by rail have spiked over the past decade, corresponding with a sharp rise in the production of ethanol from the Midwest and oil from the Bakken crude region of North Dakota and Montana.

With the Wisconsin accidents, at least 26 oil trains and 11 ethanol trains have been involved in major fires, derailments or spills during the past decade in the U.S. and Canada, according to an Associated Press tally from data kept by transportation agencies and safety investigators.

The most devastating, in July 2013, killed 47 people and destroyed much of Lac-Megantic, Quebec, when an unmanned, out-of-control train hauling Bakken oil crashed and exploded.

North Dakota regulators this year began requiring companies to process crude before shipping it by rail in order to strip out some flammable gases. Federal regulators have sought tougher railroad tank cars for shipping ethanol and oil.