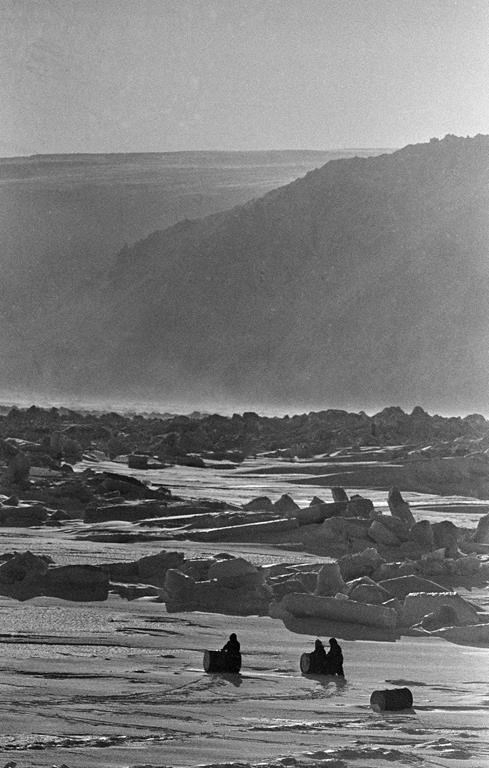 ANCHORAGE, Alaska — More Arctic sea ice melting each summer from global warming is making it easier for ships to plot routes through the environmentally sensitive Bering Strait, and is prompting concerns among U.S. Coast Guard officials about the potential dangers of a vessel crashing and leaking oil.

The Coast Guard is taking steps to plot a shipping route that will help the ships safely navigate the 53-mile wide waterway separating Russia and Alaska. Among the vessels slated to pass through the strait is a cruise ship carrying more than 1,000 passengers on a 32-day voyage next year through the Northwest Passage.

The federal agency has laid out a 4-mile wide route through the Bering Sea into the Arctic Ocean and is reviewing public comment on whether it should become the first commercial shipping lane along Alaska's west coast.

"We want to really try to keep these large commercial vessels that we're starting to see on an ever-increasing basis far enough from land, and we believe that we can do that with a route," said Lt. Kody Stitz, a project officer in the agency's waterways management branch.

Through 2015, Arctic summer sea ice has declined 13.4 per cent per decade relative to the 1981 to 2010 average, according to the National Snow and Ice Data Center at the University of Colorado.

Cargo companies have not created polar shipping service between continents, but on the U.S. side of the Bering Sea, the Coast Guard is monitoring research missions, tour boats and shippers delivering goods to Alaska's Arctic Ocean whaling communities.

In 2014, the Coast Guard counted 340 transits through the Bering Strait made by about 120 large vessels. That volume is not enough to generate a shipping lane study, Stitz said. However, the region is both ecologically sensitive and remote, he said.

"We don't have good response capabilities. We don't have a good salvage response up there. We have inadequate pollution-fighting equipment up there," Stitz said. "If something were to go wrong, it really could compound itself."

The agency doesn't want a repeat of the Selendang Ayu, a 738-foot freighter that lost power, ran aground and broke in two on Dec. 8, 2004, on the north side of Unalaska Island in the Aleutians. It spilled 66,000 tons of soybeans and an estimated 350,000 gallons of oil.

Six of the 10 crew members died when a rogue wave crashed into a Coast Guard helicopter lifting them from the vessel. The helicopter crew was rescued. "We don't want to see that happen in the Bering Sea, or further north," Stitz said.

One of the vessels planning to transit the Bering Strait next year is the 820-foot luxury cruise ship, the Crystal Serenity, which will travel from Seward, Alaska, to New York by way of the Northwest Passage, a route that winds through waters in far northern Canada.

The Crystal Serenity acknowledged the remoteness of its destination: passengers must carry a minimum of $50,000 in emergency medical evacuation insurance coverage. The cruise ship expects to move in ice-free water but will carry two marine pilots who can navigate through ice.

Crystal Cruises spokesman Paul Garcia said an escort vessel with ice-breaking capability and a helicopter that can scout for ice will accompany the ship on the trip that sold out within a month after online reservations went on sale last year.

"Safety is paramount with Crystal," Garcia said. "We're going to all extremes to make sure that our guests know we take it very seriously."

The proposed shipping lane starts at Unimak Pass in the Aleutian Islands, which sees upward of 5,000 transits annually, mostly cargo vessels operating between Asia and the U.S. West Coast.

The proposed Bering Sea route covers 730 miles, taking a path farther west of Nunivak Island and farther east of St. Lawrence Island than most ships use now. The route can guarantee that boats will be in at least 60 feet of water, Stitz said.

Environmental groups strongly encourage creation of the shipping lanes but want large vessels to safely pass environmentally sensitive natural features. For example, the Diomede Islands provide nesting colonies for nearly 7 million crested, least and parakeet auklets and other species, the largest bird concentration in Alaska, according to the groups.

The groups want a speed limit through the Bering Strait, a passageway for hundreds of thousands of animals that migrate from the North Pacific to the Arctic Ocean, including bowhead and grey whales.

The National Oceanic and Atmospheric Administration wants the proposed lane shifted west in the southern Bering Sea to protect endangered right whales. Others call for more study to determine if the lane overlaps with migratory routes of bowhead whales.

The Coast Guard hopes to complete its route study by next summer.