Pipeline reviews “contaminated by fraud from the get-go,” says May 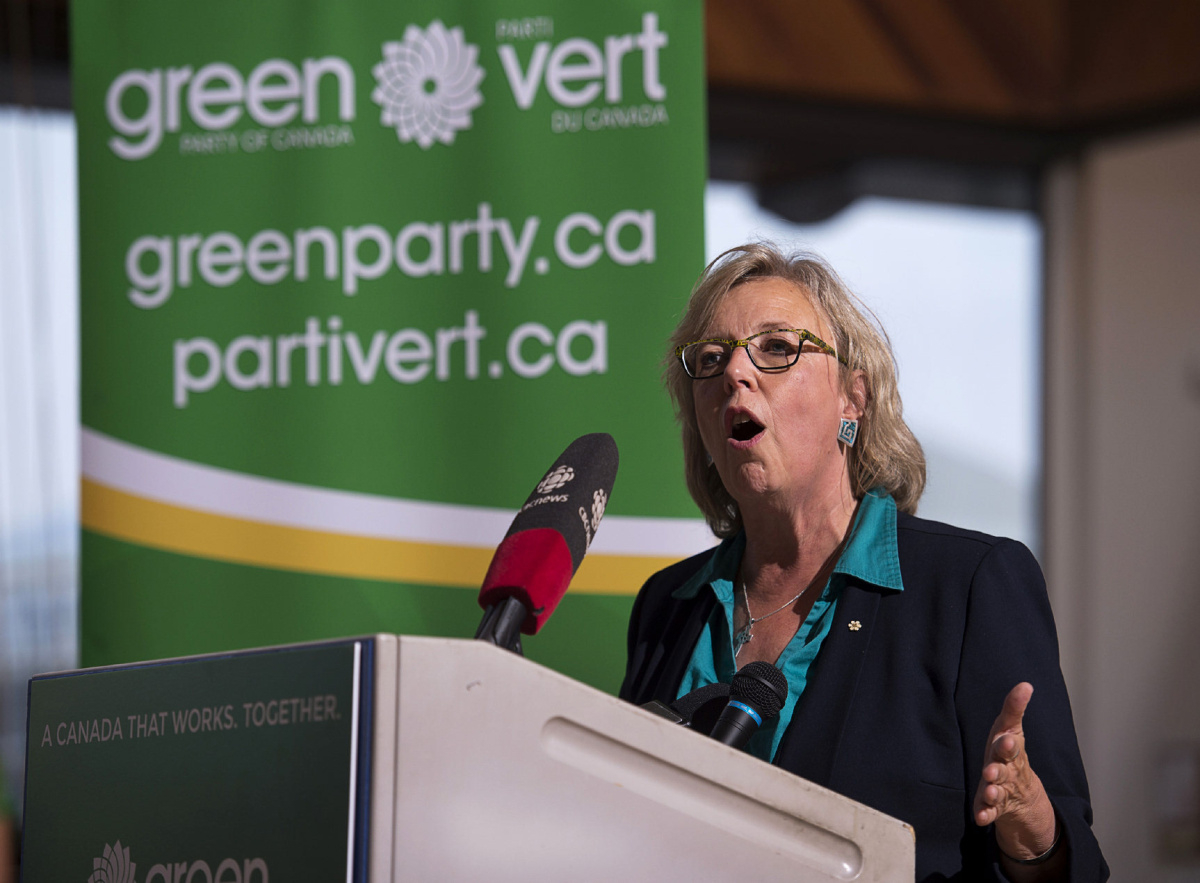 Green Party leader Elizabeth May denounced National Energy Board (NEB) reviews of both the Energy East and Trans Mountain Pipeline proposals as frauds – and warned that Justin Trudeau faces a legal mess.

If approved, the Energy East pipeline will transport 1.1 million barrels of oil per day from Alberta and Saskatchewan oil sands to terminals on the Atlantic coast. The expansion of the Trans Mountain pipeline will allow Kinder Morgan to transport another 890,000 barrels per day from Alberta to the West Coast, up from the current rate of 300,000 barrels per day.

“My view is that the National Energy Board process was contaminated by fraud from the get-go," said May at a press briefing in Ottawa's National Press Theatre on Nov. 19. She based her statement on the fact that Kinder Morgan submitted as evidence to the National Energy Board what they claimed was mathematical modelling for oil spill behaviour by the Environmental Protection Agency (EPA) of the United States— but that Kinder Morgan had falsified it by lining out the word "draft" on every page of the EPA report.

May also spoke about the Paris climate talks at the briefing.

Despite the potential legal quagmire, Justin Trudeau’s new Liberal government has chosen to press ahead with both NEB reviews first started by his predecessor Stephen Harper.

In doing so, the new prime minister broke a commitment made to B.C.’s Dogwood Initiative last August that all ongoing pipeline reviews would be halted as part of a complete overhaul of the NEB, which Harper stacked with pro-fossil fuel board members.

“It applies to existing projects, existing pipelines as well,” Trudeau said in a Dogwood Initiative video posted in August. A representative asked him how he would handle Kinder Morgan’s proposed twinning of the Trans Mountain Pipeline stretching from Alberta to Burnaby in B.C.

Both the Trans Mountain and Energy East reviews as they stand are “quite illegitimate,” May said, during the press briefing.

Ideally, she said, the new Canadian government would start the process again and fix Canada’s environmental assessment laws that were gutted by Harper’s passage of omnibus bill C-38. Titled the Jobs, Growth, and Long-term Prosperity Act, the bill imposed stricter time limits on NEB reviews, as well as allowing its decisions to be reversed by the federal cabinet.

“[Trudeau’s government is] in a very difficult position, because they promised that as they're currently being reviewed, neither project could be approved, but to cancel the existing reviews, they will face lawsuits,” said May. “It’s bound to end up in sticky court proceedings one way or another.”

Trudeau’s pipeline dilemma is made even more difficult owing to international trade agreements such as the North American Free Trade Agreement and the Foreign Investment Promotion and Protection Agreement (FIPA) with China, which allow corporations to sue the federal government if they disagree with decisions arising from environmental assessments.

“Investor-state dispute resolutions… undercuts a lot of what we want to do in repairing our own laws in this new government,” said May.

May cited the Bilcon corporation case, which arose after the Delaware-based company was denied permission to expand an existing quarry in Nova Scotia by both the provincial and federal governments.

After being denied permission to expand, the corporation bypassed the Canadian court system and instead appealed to a NAFTA arbitration panel, which awarded the corporation $300 million in damages.

According to May, Bilcon was able to invoke NAFTA’s Chapter 11 and opt for what she termed a “secret tribunal,” in order to win their case against Canada.

“Right now Canada is appealing that decision but it’s very dangerous and it has implications for stopping and starting Kinder Morgan,” said May.

But protocols similar to Chapter 11 exist in FIPA, signed into law by Stephen Harper last year. The agreement locks Canada into a 31-year deal with Beijing that includes professional arbitration panels managing disputes. Once again, regular courts are bypassed and the public may not know if Chinese corporations did successfully sue the Canadian government for millions of dollars.

According to NAFTA’s Chapter 11 text, tribunals are made up of three members drawn from three different nationalities: an arbiter who does not share citizenship with either disputing party, plus two more people who share the same nationality of each disputing party.

“Hopefully we can get this Bilcon case appealed successfully, but we’ve never won an appeal on a Chapter 11 decision yet,” said May.