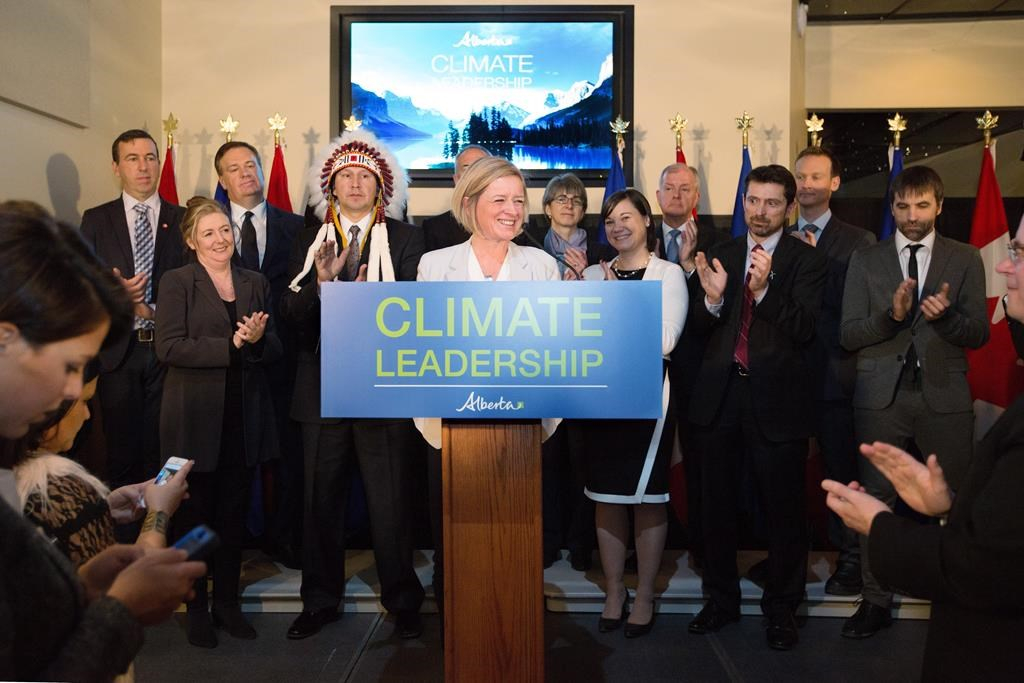 CALGARY — Prominent members of both Big Oil and the environmental movement have given their blessing to Alberta's sweeping new climate change plan.

But as remarkable as it was for the likes of both oilpatch billionaire Murray Edwards, Canadian Natural Resources Ltd.'s chairman, and former U.S. vice president Al Gore, an outspoken advocate for tougher climate action, to back the plan, not everyone is singing its praises.

One of the biggest producers in the oilsands, ExxonMobil Corp.-controlled Imperial Oil (TSX:IMO), isn't ready to endorse the policy.

"We are studying the announcements from the Alberta government to assess their impact on our existing operations and possible future projects in Alberta," Imperial spokesman Pius Rolheiser said in an email Monday.

He added any policy must "protect the competitiveness" of the oil and gas industry.

Among other things, the plan aims to cap oilsands emissions at 100 megatonnes annually — about 30 megatonnes more than the industry now emits. The plan also includes a $20-a-tonne price on carbon emissions that will cover about 90 per cent of the economy, including essentials such as gasoline and home heating fuel, in 2017. That price will increase to $30 the following year.

In an interview Monday, Shell Canada's outgoing president Lorraine Mitchelmore — a vocal supporter of the policy — said the feedback she's heard so far from others in the industry has been "pretty positive."

"You'll never be able to get something that's unanimous, but when you take a leadership role because it's the right thing to do, you get many people behind you," she said.

Shell Canada's European parent company was among the first oil majors to advocate for a price on carbon and has long been assuming a $40 a tonne price when it makes investment plans.

Mitchelmore, who is stepping down from her role at year-end, called the Alberta announcement "historic" and said it makes her proud to be Canadian.

"It was one of the best consultations that I've seen, actually," she said of the climate change panel's review, headed by University of Alberta economist Andrew Leach.

"There is no perfect policy, but I think this is probably the most balanced, most well thought-out policy that I've seen ... People have come together ahead of policy versus coming together after."

Samir Kayande, director of energy research at ITG Investment Research, said it seems the cost to oilsands producers will be relatively modest — in the order of 30 cents a barrel more for a steam-driven project.

"Even though it means that their costs are going to be a little bit higher than they would have been in the absence of doing nothing, I think there was probably a recognition that doing nothing wasn't an option," he said.

The Canadian Association of Oilwell Drilling Contractors cautioned the climate policy could imperil Alberta's competitiveness, unless it's offset by lower royalties — something the province is also reviewing.

It called for the funds raised by the policy to cycle back to the industry.

"If this is a truly revenue neutral tax, every dollar raised through new carbon taxes should be made available to industry in order to reinvest into new technology to achieve emission reductions."