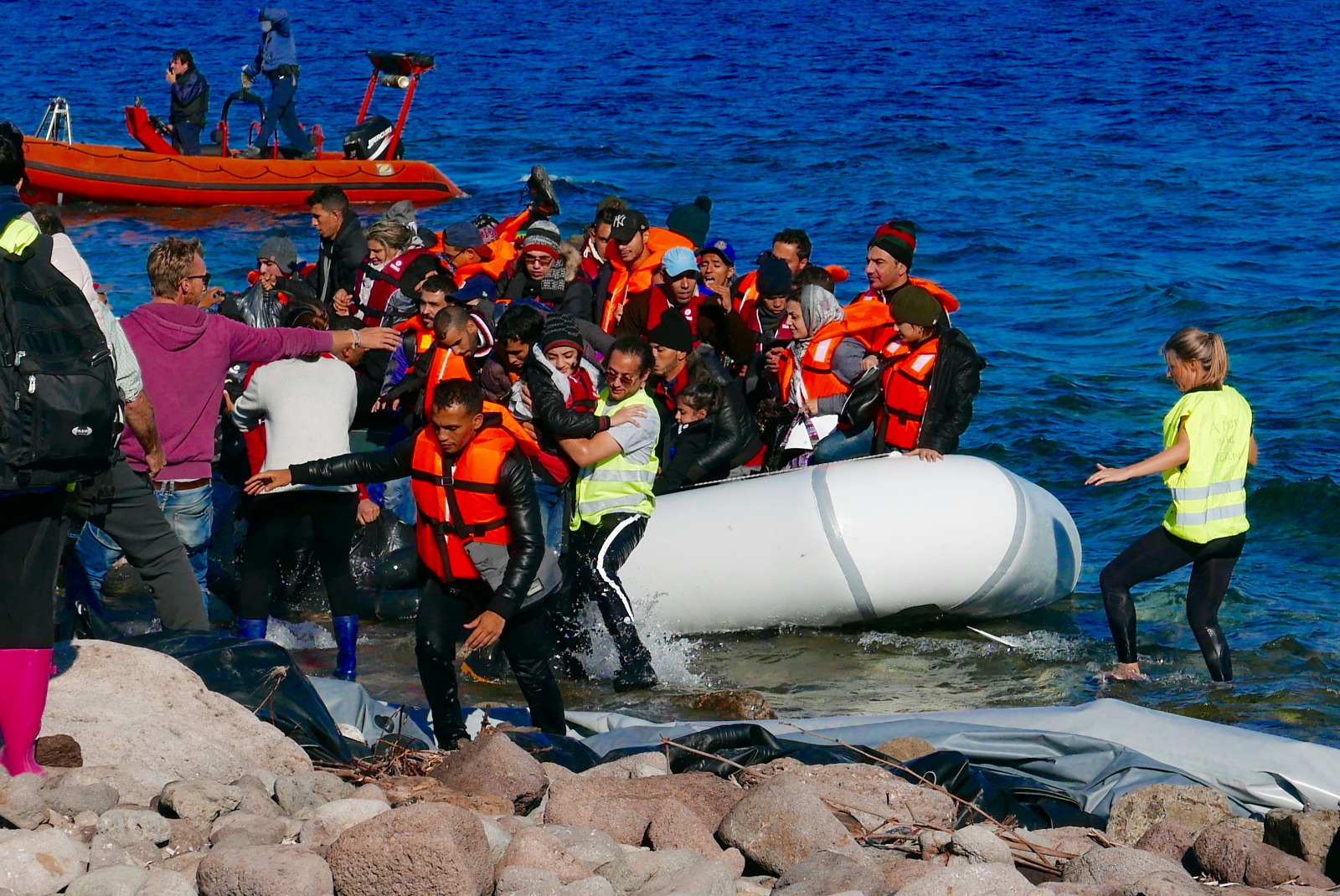 “A boat is coming! A boat is coming!” A dreadlocked volunteer, shirtless under his high-visibility vest, is yelling. He picks up an orange life vest—discarded on the beach by a now-departed refugee—and starts waving it frantically.

For a mile up and down the coast other volunteers also begin signalling to the boat plodding along the horizon.

Similar scenes are occurring multiple times each day on this small Greek island of Lesbos, where many of the refugees from Syria, Iraq, Afghanistan, and elsewhere are first entering Europe.

As the overloaded boat’s trajectory becomes apparent, volunteers race down the beach towards the anticipated landing site. A group of wetsuit-clad men jump into the water and start swimming towards the raft.

Chaos reigns. There is a lot of shouting but no coherent plan of action. Personnel in high-visibility vests from countless NGOs mill about, stumbling into each other. Amongst the crowd, there are binoculars, the latest communication devices, and, yes, selfie sticks.

There is also a small army of journalists—mostly, it seems, freelance.

Everyone is here, that is, except for a meaningful coordinating body. Simply put, no one is in charge.

Where is the UN?

The United Nations High Commission for Refugees (UNHCR) is mandated to deal with such crises. But in the new world order, international umbrella organizations like the UNHCR have been systematically gutted. A recent report in The Guardian suggests that a shortfall in funding has bankrupted the UNHCR and its sister agencies, rendering them incapable of addressing the greatest human migration in more than a generation.

According to account after account, a similar picture is unfolding everywhere as wave upon wave of refugees pour into Europe from Asia, Africa, and the Middle East.

And the catastrophic predicament is only intensifying. Winter is coming. People are becoming hungry, sick and desperate. Anger and frustration are mounting on all sides.

The lack of coordination is particularly dire given the tremendously fluid and unpredictable nature of this exodus. Months ago, Europe as a whole was caught off guard by the flood of humanity arriving on its doorstep.

The situation in Greece and particularly on Lesbos is a microcosm of the broader transformation occurring across the region. In the case of Lesbos, no one seems to know how many people are massing on the Turkish shore at a given time, waiting to make the jump. And so it is anyone’s guess how many boats will leave on a given day. Moreover—and likely worse from a logistical standpoint—no one knows where the boats will land and so there is invariably a scramble to meet the refugees as they come ashore.

Most of the boats are not actually piloted by a smuggler or someone who knows the coastline but instead by one of the client refugees handpicked by the smugglers on the Turkish side of the crossing to drive the boat. With no knowledge of the water, these impromptu captains have little idea where they are headed and so may end up anywhere along the coast—if they make it safely. Some don’t arrive at all.

But for all the objective challenges, the crisis is undoubtedly compounded by the absence any meaningful centralized effort to manage the plethora of smaller NGOs—and their own too-often disparate agendas—that have joined the fray.

In essence, anyone can show up.

Here on Lesbos, it is the trauma tourism dream. Nice weather. An environment essentially without security concerns. Empty resorts for accommodation—right now is normally down season and so the hotels are vacant and eager for the new ‘tourist’ aid workers.

The result is a carnival-like atmosphere. The posturing, the flirting, the strutting egos, it’s all here. Volunteers take selfies on the beach and motor around in rafts abandoned by the new arrivals. Photographers jostle with aid workers in a bid for the perfectly heartbreaking shot of a broken refugee.

That being said, in spite of it all, there is a certain sincerity in the solidarity shown to the new arrivals.

And in return there is genuine gratitude on the part of the refugees. In some cases, the welcoming committees might not be accomplishing much, especially considering the huge amount of time, money, and manpower being squandered. But the volunteers are extending a heartfelt and—I would argue—profound message to the arrivals, and indeed to the rest of the world.

There is an intangible yet powerful sense here that the volunteers are not only here ostensibly to help, but also to bear witness. To see firsthand this revolution and to say, in not so many words, “You are not alone”.

Those people on the beach waving and hugging and cheering are a poignant image and one that I suspect will not be soon forgotten. For every plate of food handed out, for every cup of tea poured, for every baby held while a traumatized mother rests, all these acts build bonds that are stronger than all the rhetoric in the world.

God knows we need to build these kinds of bridges now. The horror of the Paris attacks—and the evolving reactionary aftermath—makes this need paramount.

The geopolitical waters will not get any less tumultuous in the coming years.