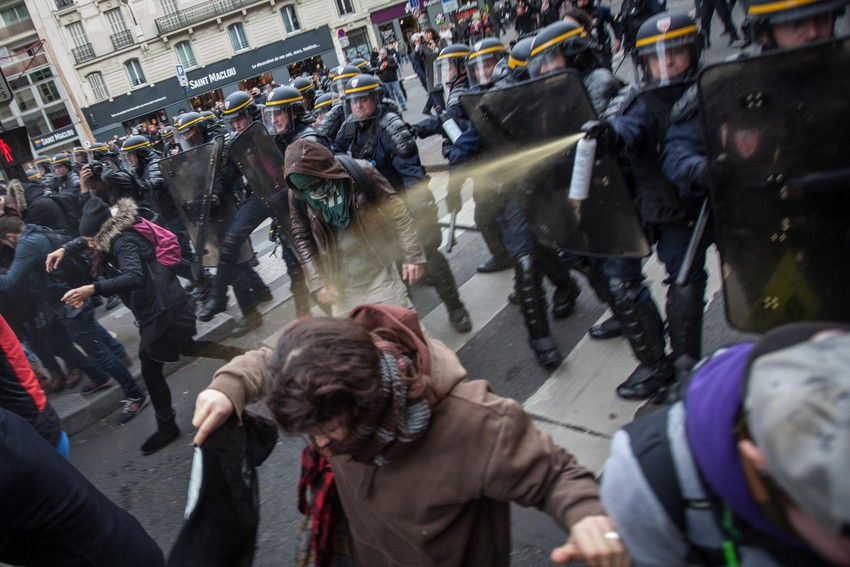 Many threw objects at police near Place de la Republique in central Paris. Some 200 people were arrested and some journalists were sprayed in the face.

"I was on the street to fight against global warming," Parisian Arthur Levivier told the National Observer. "We've had a few attacks of terrorist attacks, and the French government used this as an opportunity to fight against activism. Now they are calling green activism terrorism."

The French government banned public protests, saying they represent security risks in the wake of recent terrorist attacks that killed 130 people in restaurants, cafes and a national stadium soccer match. Paris is hosting the arrival of 147 world leaders on Monday, including President Obama.

And Canadian premiers Christy Clark, Rachel Notley, Brad Wall and Kathleen Wynne laid a wreath in memory of the lives lost. Prime Minister Trudeau said Canada would do its part to support the people of France in its time of mourning.

“Our hearts and prayers go out to our French cousins during this dark and terrible time. The recent terrorist attacks in Paris are not only an attack on the people of France – they are also an attack on our shared ideals. These crimes are an affront to our way of life and the fundamental values we share with our closest allies," the PMO said in a statement.

But some aren't taking the restrictions against their freedoms lightly.

"They are using it to allow verification on everything about us. There've been a lot of arrests in Paris and everywhere in France, and they say it's because we're in a state of emergency — but it's a bit crazy to arrest a seller of vegetables, just because they are protesting climate change," said Levivier.

Some 200 people were arrested, according to news reports. Many were identified as "anti capitalists."

Levier said some in the protests crowds were just trouble makers —ruining the climate justice message that others wanted to spread.

"Some protesters are not really here to fight climate change, they just fight cops."

"So people on the TV say 'look at those violent activists' - but that is not us. Those stupid guys are not us."

"We are fighting for a better world."