Obama brings hope to Paris climate talks: ‘this is a turning point’ 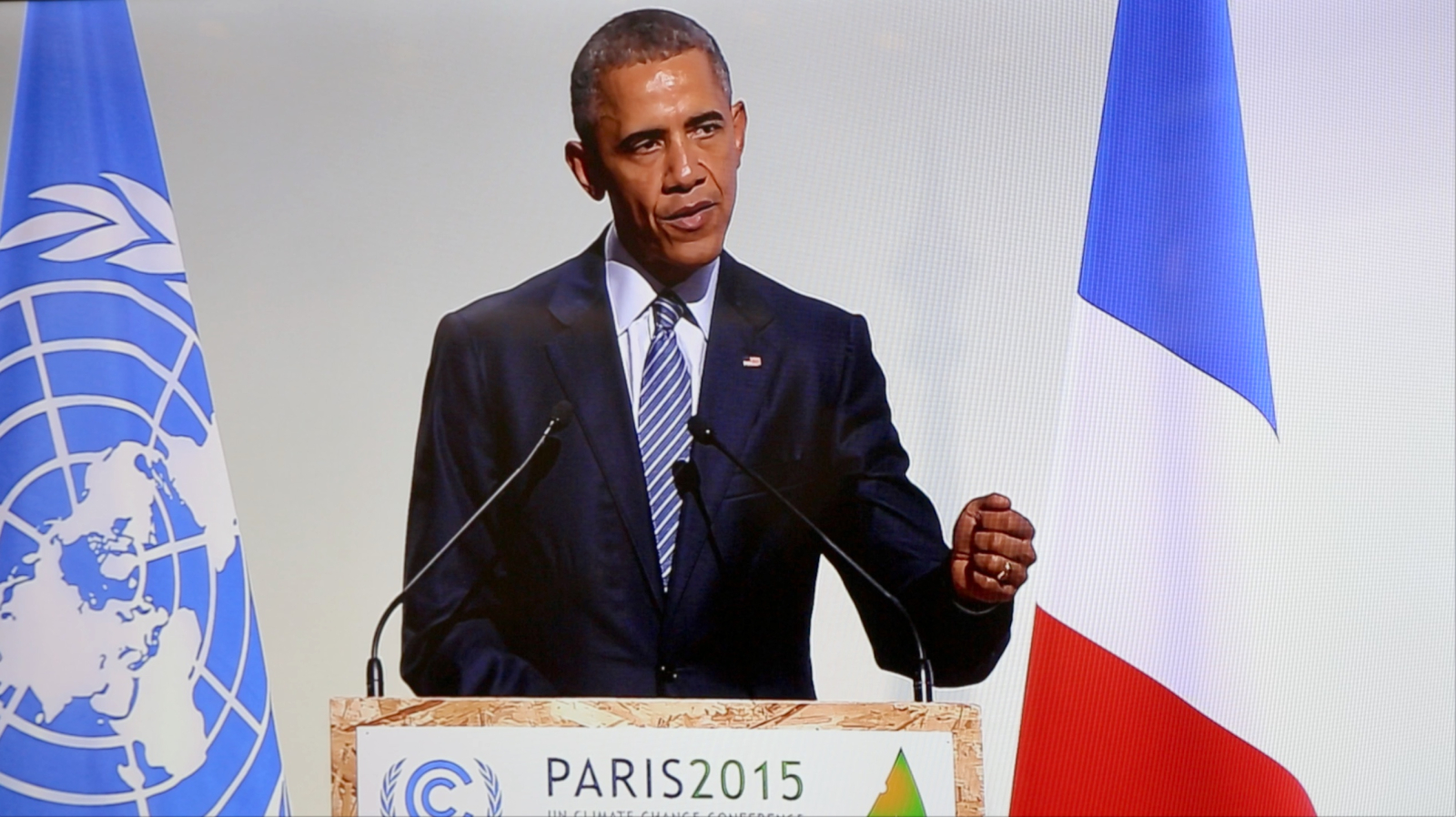 From the streets of Paris to inside the COP21 summit, France’s capital is buzzing with excitement as 40,000 delegates and 150-plus world leaders gather for the Monday start of mega negotiations billed as the most important climate change talks in history.

President Obama took to the UN podium to tell the world: “The growing threat of climate change could define the contours of this century more dramatically than any other.”

In Alaska, where he recently visited, he said the impacts of climate change are already swallowing villages, eroding shorelines, melting permafrost, and burning tundra. He said it’s a "preview" of what’s to come for humanity’s children.

But he said, “this is a turning point. This is the moment we decided we’d finally save our planet.”

“[So] I’ve come here personally as leader of the world’s largest economy, and the second largest emitter —to say that the United States of America not only recognizes our role in creating this problem —we embrace our responsibility to do something about it.”

Prime Minister Trudeau is expected to speak soon at the COP21 conference site —which is “the safest, most secure building on the planet right now,” said one Canadian environmental observer.

Environmental Defence Canada’s Dale Marshall says it’s not just Canadians who will be watching the new Canadian leader, just three weeks into his mandate. “Quite a few people will be watching internationally, because it’s new government, a new guy in power. Their expectations are high. There’s a lot of hope that Paris is going to deliver an agreement, and Canada will contribute,” Marshall told the National Observer, inside the COP21 event.

All over Paris, climate summit fever has struck. There are alternative energy installations, green-coloured art projections on the Eiffel Tower, and demonstration sites for new green technologies, such as electric vehicles to low-waste solutions.

“The world is looking at Paris because the future of the planet is now," said Paris student Lidy Tameron on a downtown street. "It’s in the hands of government —we need to say to them —stop the climate crime.”

“I think today we were powerful and we made history,” said Christelle Soeur, 20, —one of some 2,000 locals and visitors who locked hands in a single-line of people across Paris in solidarity for climate action. She said she wants Africans' concerns to be noticed.

"We would like...to represent the most visible impacted population from climate change,” Soeur said.

Marshall said the primary objective for the Paris summit is "to deliver the next big climate change agreement —and it has to be a more ambitious one than in the past." The international COP21 gathering is also the largest group of world leaders to attend a UN event in a single day.

Canada’s Environment and Climate Change Minister Catherine McKenna said Sunday that “Canada is back” and will be a constructive voice in negotiations, and will contribute $2.6 billion to developing countries climate actions.

The official aim for COP21 is to get all nearly all countries to cut enough emissions to keep global warming below two degrees Celcius this century. Environmental groups are calling for a more ambitious target: just 1.5 degrees of warming. The UK Meteorological Office says the planet has already hit 1 degree of warming above pre-industrial levels.

Canada’s 36 million citizens represent just 0.4 per cent of the world’s population, yet pollute 1.6 per cent of total global greenhouse gases — or four times the global average.

Canada also exports a lot of burnable carbon from the oil sands. And increasingly, there are plans to export liquified natural gas (LNG) from the west coast to Asia.

The journal Science also recently published the conclusion that nearly all of Canada’s oil sands reserve needs to stay in the ground for the world to have a 50-50 chance at slowing global warming to the UN goal of two degrees warming.

Mckenna said Sunday, “The oil sands is important to the Canadian economy…but we are very encouraged that the government of Alberta needs to be doing its fair share in terms of tackling climate change” —a reference to last week’s moves by Edmonton to cap oil sands emissions at 100 mega tonnes annually, among other carbon policies.

Canada also matters at the talks because it is a wealthy nation that also got rich on carbon —its oil, gas and coal reserves have burned since the 19th century to build the nation’s railroads, cities, and industries. Developing countries have asked wealthy countries to therefore take the lead in tackling global warming —a problem that impacts them disproportionately.