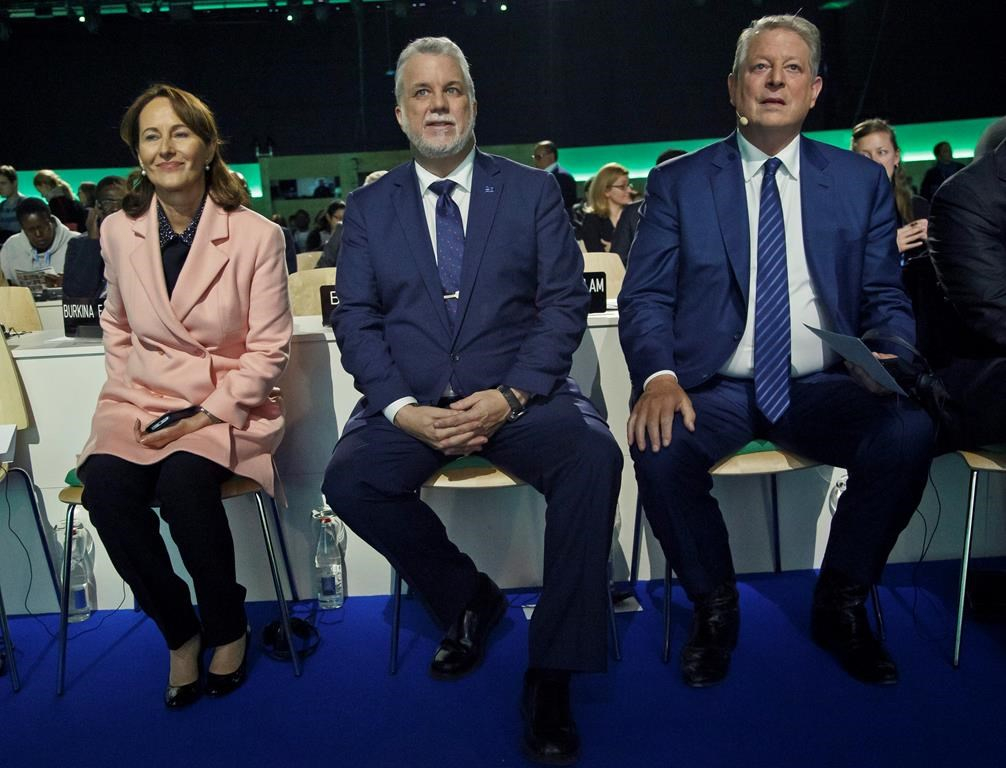 PARIS — Former U.S. vice-president Al Gore expressed his deep gratitude to Quebec on Saturday for what he called its leadership role in tackling global climate change.

Gore was at the United Nations climate conference in Paris alongside Quebec Premier Philippe Couillard, who announced the province will contribute $25.5 million over five years to help French-speaking developing nations fight climate change.

"Premier Couillard and his team have long since established fantastic leadership in the world community, in humanity's effort to solve the climate crisis," Gore said.

Couillard said $18 million of the funds will be used to support international projects that will capitalize on Quebec's expertise in energy and clean technology.

The rest will be split between a fund to finance climate-change adaptation measures in the world's least-developed countries and initiatives to help youth get involved in environmental issues.

Gore said the announcement "warmed his heart" and served as an example of how developed regions can help the less-developed fight climate change.

He also praised the province's past action in creating what Gore called a "truly effective" carbon market with California.

"Thank you to the people of Quebec," he said. "You are becoming known as true heroes in the world's effort to solve the climate crisis."

Couillard, for his part, described Saturday's announcement as "Quebec's contribution to one of the major issues of international climate negotiations."

The money is part of the country's $2.65-billion pledge over the next five years to help developing countries transition to low carbon economies.

"Canada is proud to do its part in providing greater access to insurance," McKenna said in a statement.

Gore also had praise for other provinces including Ontario, Alberta and British Columbia for their commitment to reducing emissions.

Earlier in the week he tweeted his support for Manitoba's decision to launch a carbon market.

In November, he described Alberta Premier Rachel Notley's climate change plan as "an inspiring addition to the legacy of leadership and forward-thinking action by Canadian provinces to speed our transition to a low carbon economy."

On Saturday, Gore chose to echo the words Prime Minister Justin Trudeau used in his opening speech at the Paris conference.

"Canada is back," Gore said. "I don't know if it's OK for someone who's not Canadian to say that, but everyone knows it's true."