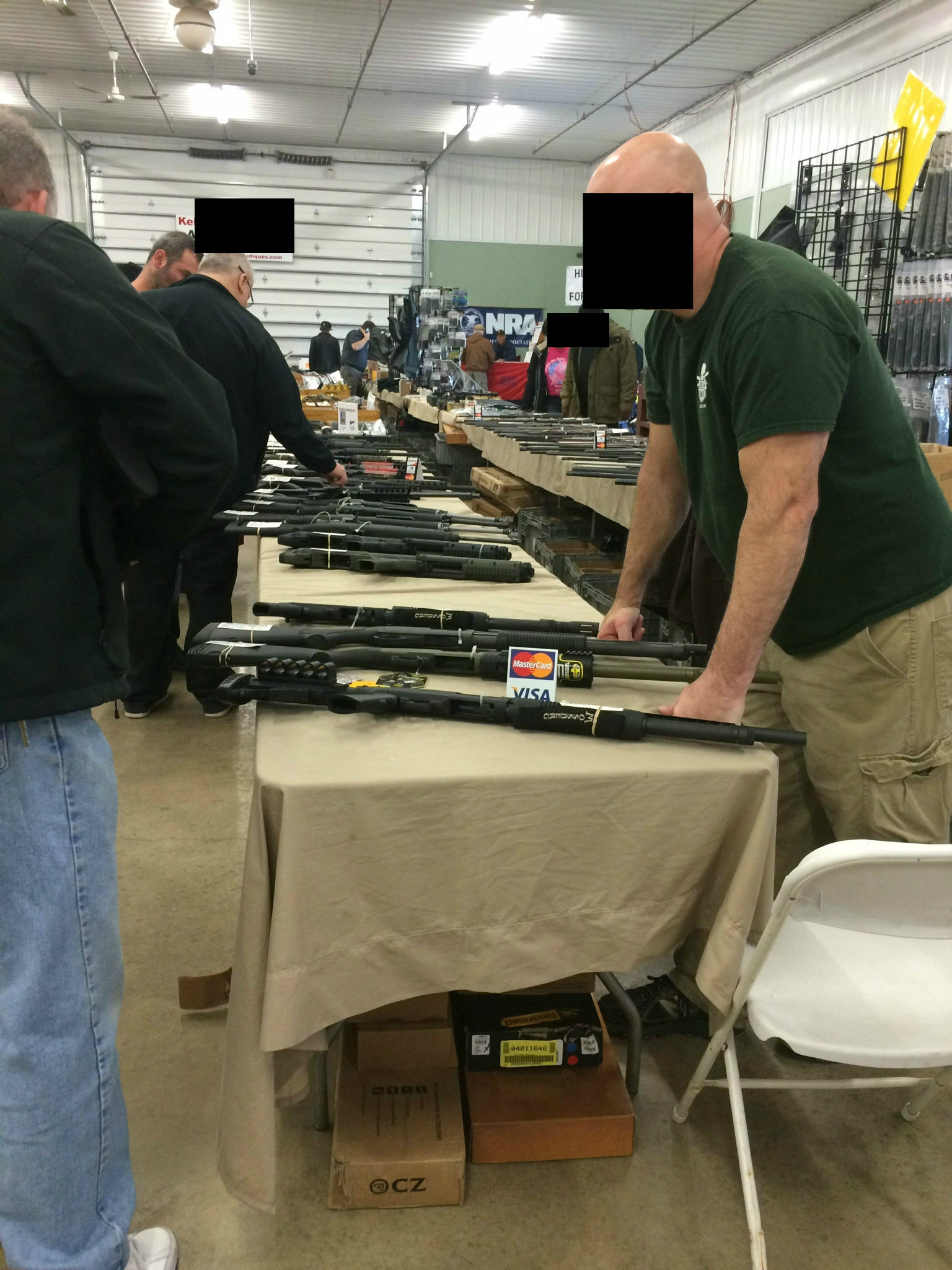 A gun dealer selling his wares at a gun show.
Previous story
Next story

The paranoia bore down as I walked towards the nondescript warehouse hosting the gun show not far from the Canadian border in New York state.

The first person I met was a man with grey hair and a pronounced limp. He wore a sweater stretched over a protruding belly. As we walked into the expo, he asked if I was Muslim.

“I want to kill them and feel their blood run through my hands,” he remarked casually, as if commenting on the weather.

This was my somewhat dubious introduction to the town of 31,000 people about a three hour drive from Toronto, across the Niagara Falls border crossing. The town stretches along the highway, with an attractive downtown full of wooden clapboard houses and brick buildings, its broad Main Street lined with old-fashioned street lamps.

The Islamophobic man and I walked into the expo together. A couple of people walking out passed us carrying long white boxes containing rifles of some kind. A young security guard with cropped blond hair pointed me over to an admission desk. Five dollars later, I was in.

Inside, vendors hawked their wares from behind tables sagging under the weight of pistols, shotguns, and racks of hunting rifles. Two stalls were run by the National Rifle Association, tended by a quiet man in a baseball cap, and by the Shooter’s Committee On Political Education, manned by a tall, white-haired man and his wife. I also spotted another table filled with Civil War memorabilia and a box of Confederate flags going for $22 each.

AR-15s were available aplenty, civilian versions of the US military’s M-16 assault rifle. It was this very weapon that San Bernardino shooters Syed Rizwan Farook and his wife Tashfeen Malik used to slaughter 14 people at a party three days ago, before being killed themselves by authorities.

An entire row of AR-15s were laid out for sale, their prices ranging from $800 to $1,100 per gun. I asked the vendor what the procedure was for buying an AR-15 rifle in New York State.

He told me that it was pretty simple: a quick call to the FBI, who check a prospective owner's name against the National Instant Criminal Background Check System to ensure that they are not prohibited from buying a weapon. Usually, it only takes a few minutes and there is no waiting period. Anyone who is a fugitive from justice, has served jail time in excess of one year, recent drug user, or those committed to a mental institution, among other categories, are prohibited from buying guns. However, no background check is required for weapons sales or transfers to spouses, domestic partners, children and stepchildren.

A follow-up call to the state police revealed that buying a long gun is simple for New York residents. No licence is required. AR-15s are permissible if registered with authorities and comply with New York's Safe Act. Among other requirements, AR-15 magazines may not exceed a capacity of 10 rounds and can only be loaded with a maximum of seven bullets unless on a gun range. A New York state permit is only required for pistols and handguns.

Buying that same gun in Canada is a whole different story.

Canada classifies the AR-15 as a restricted weapon. It requires prospective buyers to first obtain a gun license, firearms and safety training, and police background checks. Even then, any Canadian resident wishing to acquire an AR-15 must first be approved by the chief firearms officer in a buyer’s home province. All buyers who do not currently own a firearms license must undergo a minimum 28-day wait period – far more stringent than in New York State.

By now the AR-15 vendor – a bearded man in a black shirt – noticed I was recording the conversation on my iPhone, as did another man standing next to me, and threatened to call security.

Before that happened, I deleted my recording as both men watched. Even then, they took no chances. They did not want details of this arms fair getting out to the public.

“It’ll be in your trash,” said the sharp-eyed man in the cap, earning him a fist-pump from the AR-15 vendor. That too was deleted. It was the only way to prevent security from booting me out.

In just my first few minutes, I had witnessed outright anti-Muslim hatred, paranoia over recording devices, and firearms – including semi-automatic AR-15s – readily available to just about anyone who wanted them.

Later I got talking with an ammunition seller who seemed somewhat friendlier than the AR-15 dealer.

In his view, the San Bernardino massacre could have been stopped – or at least lessened – if the victims also had guns and could fire back. For school shootings, arming teachers was the best way to stop massacres like Sandy Hook, which left 20 children and six adult staff members dead three years ago. Now, just three days after Tashfeen Malik and Syed Rizwan Farook went out in a hail of bullets, he was fearful that the government would use San Bernardino as a new reason to take people’s guns away.

Noting my British accent, he pointed to London, England, as an example of how strict gun laws fail to keep people safe.

“London’s the murder capital of the world as people there are knifing and clubbing each other now, because you’ve taken their guns away,” he said.

As an ammunition seller, he was also spooked by a provision in the NY Safe Act that would require him to carry out a background check on anyone buying ammunition. Currently, no such screening is needed for people buying live rounds in New York.

But earlier this year, New York governor Andrew Cuomo announced that his government would suspend the introduction of background checks for buying ammunition. The reported reason was the state government's inability to establish a background check database as originally intended and a "lack of adequate technology."

“If that ever comes to pass – I don’t know – it’ll probably put us out of business,” he said.

However, he did find some common ground with President Barack Obama, who after the San Bernardino massacre said that anyone deemed dangerous enough to be on America’s no-fly list was also too dangerous to buy a gun. But Congress has yet to close a loophole that allows those banned from boarding an airplane to legally purchase a gun.

“We may not be able to prevent every tragedy, but -- at a bare minimum -- we shouldn’t be making it so easy for potential terrorists or criminals to get their hands on a gun that they could use against Americans,” Obama said last week.

As much as he hated to admit it, he said he agreed with the president on this one point. A gathering of ultraconservative gun lovers finding common ground with a liberal president favouring gun control was a rare thing indeed.

“I don’t know what the answer is for that because you can’t take people’s constitutional rights away so easily. But at the same time there’s something wrong with them. You don’t let them fly on a plane because [they’re] dangerous. Maybe you shouldn’t let them buy a gun either.”

But there will be plenty of others who can buy guns. The Bureau of Alcohol, Tobacco, Firearms and Explosives estimated in 2007 that between 2,000 to 5,200 gun shows are held every year in the U.S.

A 2013 Toronto Star article stated that the U.S. hosts more than 4,000 such shows every year. No stats could be found for how many gun shows are held in Canada every year.

But earning people’s trust was not always easy. Of all the people at the show, I was likely the only non-American, having driven down from Ottawa to attend. The only other visible minorities present were two African-Americans who appeared local, one of them selling snacks to gun buyers. A third person with slightly darker skin was also seen browsing the stalls.

Most of the attendees were white, middle-aged or elderly, just a sprinkling of young people. Several parents brought their children, while two teenage girls helped run one of the stalls.

To help break the ice with the gun lovers, I mentioned my time in the Air Cadets, recalling how I’d fired air rifles, .22s, and the L-98 gun, a bolt-action version of the British Army’s standard infantry weapon.

My L-98 shooting did give me a little street cred with another AR-15 seller, who let me photograph his weapons on display. I snapped some shots with my iPhone as we compared the bolt-action British gun with the AR-15s, a semi-automatic weapon whose firing chamber will reload one bullet at a time when fired.

A stove cooker in your bag?

Before heading back to the border, I stopped for a late lunch at a local grill west of the downtown core. A pleasant waitress ushered me to a booth. Behind me, her father – who owned the place – was watching a football game with some other men.

“Do you have a stove cooker in that bag?” he yelled at me, an apparent reference to the 2013 Boston Marathon terrorists, who used these devices as bombs.

“No!” I replied. His daughter broke in and told him I had a British accent.

Thank goodness my accent, undiluted after eight-plus years in Canada, saved the day. He then asked me what I thought of Prime Ministers Neville Chamberlain (the polite answer was bad) and Winston Churchill (good, 'he won the war and kicked some ass.' And I meant what I said).

Thus satisfied that my allegiance was to the queen and not Abu Bakr al-Baghdadi, the man left his daughter to serve me dinner. As it turned out, she was worldlier than her father, having travelled through Turkey, Greece, Austria, Italy, Spain, and Portugal. Back in Buffalo, she was a PhD student who also worked as a teacher.

Finally, it was time for me to return to the queen’s realm, driving away from the small American town back up to Niagara Falls and into Canada. As I crossed the Canadian border and saw the Maple Leaf flying high, I breathed a huge sigh of relief.

A friend in Ajax (a town just east of Toronto) was shocked when I texted him about the man who'd said he wanted to kill Muslims.

The truth is, I'm not Muslim; but that didn't matter. It was good to get back to Canada.