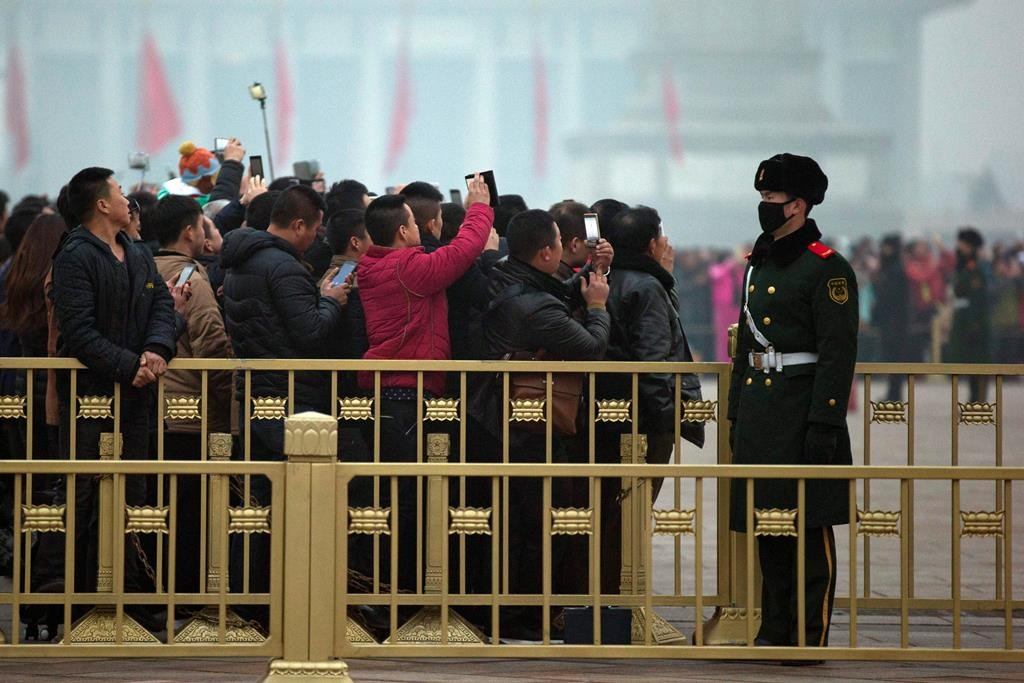 Beijing residents stayed indoors, schools were closed and limits on cars, factories and construction sites kept pollution from spiking even higher on Wednesday, the second of three days of restrictions triggered by the city's first red alert for smog.

Cars with even-numbered license plates were kept off roads, and schools and constructions sites remained shuttered. Far fewer pedestrians walked the streets than usual — many of them wearing air filtering face masks to aid their breathing.

Stuck at home, 8-year-old Zhao Hanxiao said she didn't mind missing school, but was fed up with not being able to play outside or go out to see friends.

"There is grey fog everywhere. We cannot leave the house, we cannot do anything, we can only stay at home, study at home, do everything at home," said Zhao, whose mother, an architect, has been working from the family's apartment in an affluent neighbourhood in central Beijing.

Like many children in the capital, Zhao has come to see smog as a part of everyday life. "The reality is that we have smog," she said. "I am sure smog will be here in the future, too, because this is what is normal."

Zhang Jingtie, who sells insurance and water purifiers, said she had no choice but to be out despite restrictions through Thursday that have prompted some businesses to close and others to allow employees to work from home.

"I stay outdoors most of the time, so I am very worried that I may have cancer if I continue to live in this kind of air for a long time," said Zhang, 25. "So we really need to do something to protect the environment."

Many drivers continued to defy the vehicle restrictions — 3,690 vehicles were found in violation of the even-odd license plate policy in Beijing on Tuesday — and a number of schools chose to open despite a board of education order to remain closed through Thursday.

Pollution levels midday Wednesday in central Beijing were mostly between 250 and 300 on the city's air quality index — suggesting the restrictions were having an effect. The city's alert was triggered by a forecast Monday that pollution levels would be above 300 for three consecutive days.

The index is strongly linked to levels of the dangerous tiny particles PM2.5, which at midday ranged from about 200 to 250 micrograms per cubic meter downtown — or 8 to 10 times the safe level recommended by the World Health Organization.

Although many other cities in China and elsewhere in the world typically see levels of smog even worse than Wednesday's pollution in Beijing, the Chinese capital's latest bout of smog has triggered the city's first red alert under a 2-year-old system of alerts and restrictions to deal with persistent pollution.

That followed a widely criticized failure to issue a red alert in Beijing at the beginning of December, when PM2.5 levels hit 40 times the WHO's safe level.

The ancient Forbidden City palace complex and other Beijing landmarks were lost in a grey, soupy haze on Wednesday. Convenience stores sold air-filtering masks at brisk rates, and health-food stores promoted pear juice as a traditional Chinese tonic for the lungs.

Some Beijingers have left the city altogether, taking advantage of the school closures to fly to cleaner destinations, such as the southern city of Kunming at the foot of the Tibetan Plateau.

The hazardous smog has enveloped much of the Northern China Plain between the East China Sea to the east and mountain ranges to the west.

It has persisted despite the Chinese government's stated priority of cleaning up the legacy of pollution left from years of full-tilt economic growth. Most of the smog is blamed on coal-fired power plants, along with vehicle emissions, construction and factory work.

The world's biggest carbon emitter, China plans to reduce hazardous emissions from coal-fired power plants by 50 per cent over the next five years, and says its overall emissions will peak by around 2030 before starting to decline.

While emissions standards have been tightened and heavy investments made in solar, wind and other renewable energy, China still depends on coal for more than 60 per cent of its power.

China's polluted air has had severe health effects. A study led by atmospheric chemist Jos Lelieveld of Germany's Max Planck Institute and published in the journal Nature this year estimated that 1.4 million people each year — almost 4,000 per day — die prematurely because of China's pollution.

The spike in air pollution has created opportunities for China's notorious counterfeiters. Shanghai's city government said in a statement Wednesday that more than 970,000 fake 3M-branded masks and two production machines with a total value of 10.3 million yuan ($1.6 million) were seized in a police operation in the city last month.