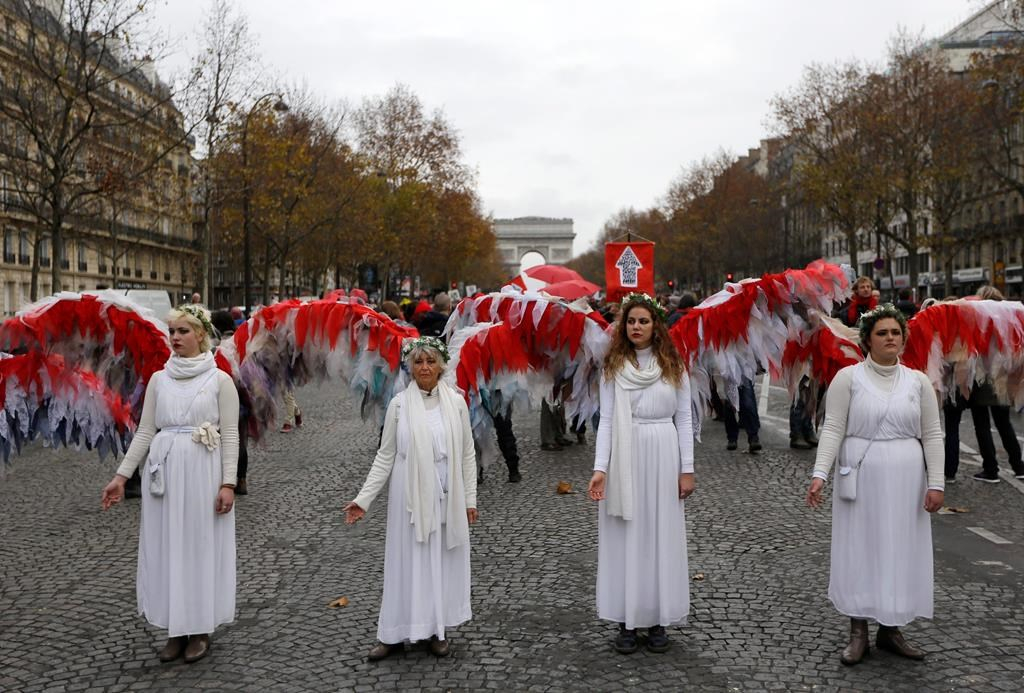 LE BOURGET, France — The latest on the U.N. climate conference outside Paris (all times local):

Hollande told delegates at the Paris conference that the deal would be "unprecedented" in the history of international climate talks.

French Foreign Minister Laurent Fabius said a "final" draft of the agreement would be translated and distributed Saturday afternoon.

U.N. Secretary-General Ban Ki-moon has made an impassioned entreaty to world diplomats negotiating a potential accord to fight global warming.

"The whole world is watching. Billions of people are relying on your wisdom," he said Saturday.

"We have to do as science dictates. We must protect the planet that sustains us. We need all our hands on deck."

He spoke as a new, potentially final draft of the accord was prepared, which would require all countries to take steps to reduce emissions and help each other cope with climate change.

Fabius also says the accord would aim to keep the rise in global temperatures "well below" 2 degrees Celsius (3.6 degrees Fahrenheit) from pre-industrial times to the end of this century and "endeavour to limit" them even farther, to 1.5 degrees Celsius.

That was a key demand of small island nations and other poor and vulnerable countries.

Fabius' comments came Saturday as delegates neared the end of two weeks of talks aimed at producing the first international pact asking all countries to limit their greenhouse gas emissions.

A French official says a new draft climate accord to be presented to negotiators at U.N. talks on Saturday is about "20 pages."

That would be about seven pages shorter than a previous draft, suggesting competing options have been deleted.

The official spoke condition of anonymity because the draft had not been released yet.

Anticipation was building in the conference centre outside Paris after two weeks of talks, culminating a four-year effort to produce the first international pact asking all countries to limit their greenhouse gas emissions.

—By Angela Charlton at Le Bourget

Several environmental and human rights groups are planning protests around Paris on Saturday to call attention to populations threatened by man-made global warming and urge an end to human use of oil, gas and coal.

The protests are timed to coincide with the end of two weeks of climate talks outside Paris. Organizers are hoping to reach a final international accord sometime Saturday.

The last big climate protests in Paris, on the eve of the talks Nov. 29, ended in tear gas and more than 100 arrests as some activists defied a ban on demonstrations. The ban was linked to France's state of emergency, put in place because of Islamic extremist attacks a month ago.

Organizers say their main demonstration Saturday, near the Eiffel Tower, has been authorized by Paris police.

French President Francois Hollande will join the Paris climate talks as delegates debate what organizers hope is the final draft of an unprecedented agreement among all countries to fight global warming together.

Hollande's office says he will give a speech alongside U.N. Secretary-General Ban Ki-moon at the 11:30 a.m. (1030GMT) meeting to show "the importance of deciding and now adopting the draft text."

French officials say what they hope is the final draft has been completed and is being translated for discussion among delegates.

A French official says a new, possibly final draft of a landmark global deal to fight climate change has been completed after late-night negotiations and will be presented to world negotiators outside Paris within hours.

The official said the text is being translated into other languages before being presented at a special meeting at the Paris climate talks at 11:30 a.m. (1030 GMT). The official, who was not authorized to be publicly named in discussing the negotiations, would not elaborate on the contents of the draft.

Negotiators emerged from a late-night meeting with French Foreign Minister Laurent Fabius with signs that a deal was getting close.

The last draft accord, released Thursday night, did not resolve several key issues, including how rich and developing countries would share the burden in fighting global warming.