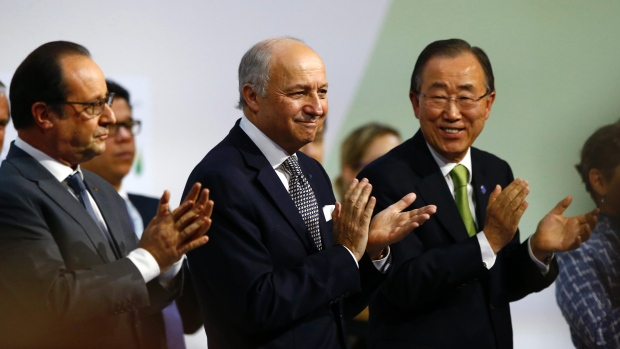 International leaders have reached a tentative pact to keep global warming "well under" two degrees, and "pursue efforts" to limit temperature rises to 1.5 degrees. French foreign minister Laurent Fabius said the deal would be legally-binding, and that targets would be reviewed every five years.

The final draft of the Paris COP21 climate talks has been released by Carbon Brief, a climate analysis site.

Many groups including 350.org praised the deal, saying it "marks the end of the era of fossil fuels" because it was impossible to meet the 1.5 degree target "without keeping coal, oil and gas in the ground." Sierra Club executive director Mike Brune called the Paris Agreement a "turning point for humanity."

Lord Nicholas Stern, who wrote the groundbreaking Stern report on climate change in 2006, told Inside Climate:

"This is a historic moment, not just for us and our world today, but for our children, our grandchildren and future generations. The Agreement creates enormous opportunities as countries begin to accelerate along the path towards low-carbon economic development and growth.”

But other groups lamented the language as too "weak" and lacking tangible measures to reach the ambitious goals outlined in the text. Friends of the Earth Europe tweeted this morning:

Oxfam International head of policy Tim Gore told The Guardian the agreement "short-changed" poorer countries. He said the financing of $100 billion to help poorer countries deal with the consequences of climate change was not enough.

Here's the full text of the Paris Agreement from Carbon Brief, showing changes from the previous draft. The text below highlights in blue the wording that has changed, while green represents brand new text in the document.

An 'historic' climate deal, but is it enough?