At 8:30 a.m. on day one of the UN climate talks in Paris — a day that would soon see Prime Minister Trudeau, President Obama and other world leaders take stage — a freshly caffeinated group of Canadian climate-negotiation watchdogs began their daily morning huddle.

Sitting in the meeting were academics, representatives of environmental organizations — David Suzuki Foundation, Environmental Defence and the Wilderness Committee among them — as well as labour, youth and faith groups.

The Conference of Parties (COP) summit itself was 23 years in the making, planned since the Rio 1992 declaration. Since then, scientists have been saying that the world’s “carbon clock” — the time left to prevent catastrophic climate dangers — has run out.

These Canadians were determined to make sure this COP, this time, didn’t fail.

One of the newcomers to the COP was Halifax environmentalist and CAN-RAC board member Catherine Abreu, who works with Ecology Action Network. “It’s my first COP and I’m having to learn fairly quickly,” she said.

Abreu said the dizzying international climate event, featuring 195 countries — where at a given moment you might see anyone from Prince Charles to Arnold Schwarzenegger to Al Gore walking by — was made easier with the coordinating role that CAN-RAC played.

“It’s a huge amount of activity. There’s so much going on. There are official negotiations, side negotiations, side events and civil society actions. Deciding how to get into that can be quite a challenge and it can feel really overwhelming,” she said.

The morning huddle was convened by the group’s “fearless leader,” as her colleague described her: Dr. Louise Comeau. She’s a climate negotiations expert from Keswick Ridge, New Brunswick, with 25 years of experience.

“It’s important to recognize when [the Canadian government] does something good,” said Comeau. “They gave a five-year commitment with five-year allotments — that’s the kind of predictability that people were looking for. So that’s a ‘tick’ — that’s good.”

“We wanted a First Ministers meeting — we got it! We wanted $4 billion dollars — they’re trying.”

“We have to remember: we’re helping them now. We’re not at the phase of beating [up on] them. We’ll get there.”

Comeau then assigned who would “track and attack” a long list of climate agreement issues, including hidden fossil fuel subsidies. She felt Canada’s Export Development Corporation — a Crown corporation— shouldn’t be mixed up with some $2.5 billion worth of financing for fossil fuel development.

“To me, fossil fuels will become the new asbestos, right? Coal consumption going down in Canada, exports doubling — so if you have anything you want to contribute on that — beautiful,” she said.

One of the biggest concerns was COP’s “long-term goal.” Would Canada push world negotiations to adopt a 1.5 degrees warming objective, or a much more harmful two degrees? Comeau asked everyone to watch the draft agreement for this “decarbonization” wording very carefully.

A veteran COP-goer, Steven Guilbeault, founder of Montreal’s Équiterre, said CAN-RAC’s goal was simple: push the Canadian government to be the best it can be at the climate talks.

“So every day at the COP we meet, all the Canadians [gather]… to understand where the negotiations are at. What role is Canada playing — a positive role, a negative role. When it’s positive, how can we reinforce that? If they are playing a negative role, why is it?” he said.

“I think the great thing about this new [Trudeau] government is that we have become an actor again in these negotiations. We had stopped [under Harper]… we were sidetracked, we were not important. We are now.”

"Future generations will be proud"

As a sign of CAN-RAC’s influence, on day two of the summit, the group’s leaders sat down with Canada’s Environment and Climate Change Minister Catherine McKenna, who was just weeks into her job.

“Thank you for joining us,” the minister said with a smile in a special secure board room at COP21.

“Thank you for making the time — precious time I know,” replied Guilbeault.

There was an ice-breaking chat about how Prime Minister Trudeau held an impromptu press conference in Paris the day before, catching environmental watchers, even premiers, off guard.

But Trudeau’s presence was welcome. Former Prime Minister Harper only attended one COP in his tenure, and his government had long been criticized as foot-dragging at climate talks, damaging Canada’s reputation.

The meeting with McKenna moved quickly to its purpose: to open lines of communications with the minister, and to lay down CAN-RAC’s "Road Map to Paris" positions.

Louise Comeau was frank. Her group’s international umbrella arm — Climate Action Network International — was threatening to hand Canada a “Fossil of the Day Award” for not doing more on “Loss and Damage.” That’s a hoped-for global fund that would provide emergency financing for poor and vulnerable nations now getting slammed by wicked storms and sea-level rise.

Prior to the meeting with McKenna, Comeau had huddled with her team about this issue. “We really don’t want Canada to get a fossil yet, until they figure it out,” she said.

Guilbeault replied: “If Canada is nominated for a fossil, we want to say it’s not time yet. At this point, they don’t deserve it.”

CAN-RAC intervened for a day to save Canada from the shunning. But when it became clear Canada’s position on Loss and Damage wasn’t stronger in support of poor countries, Climate Action Network gave Canada a fossil “award,” along with the U.S. 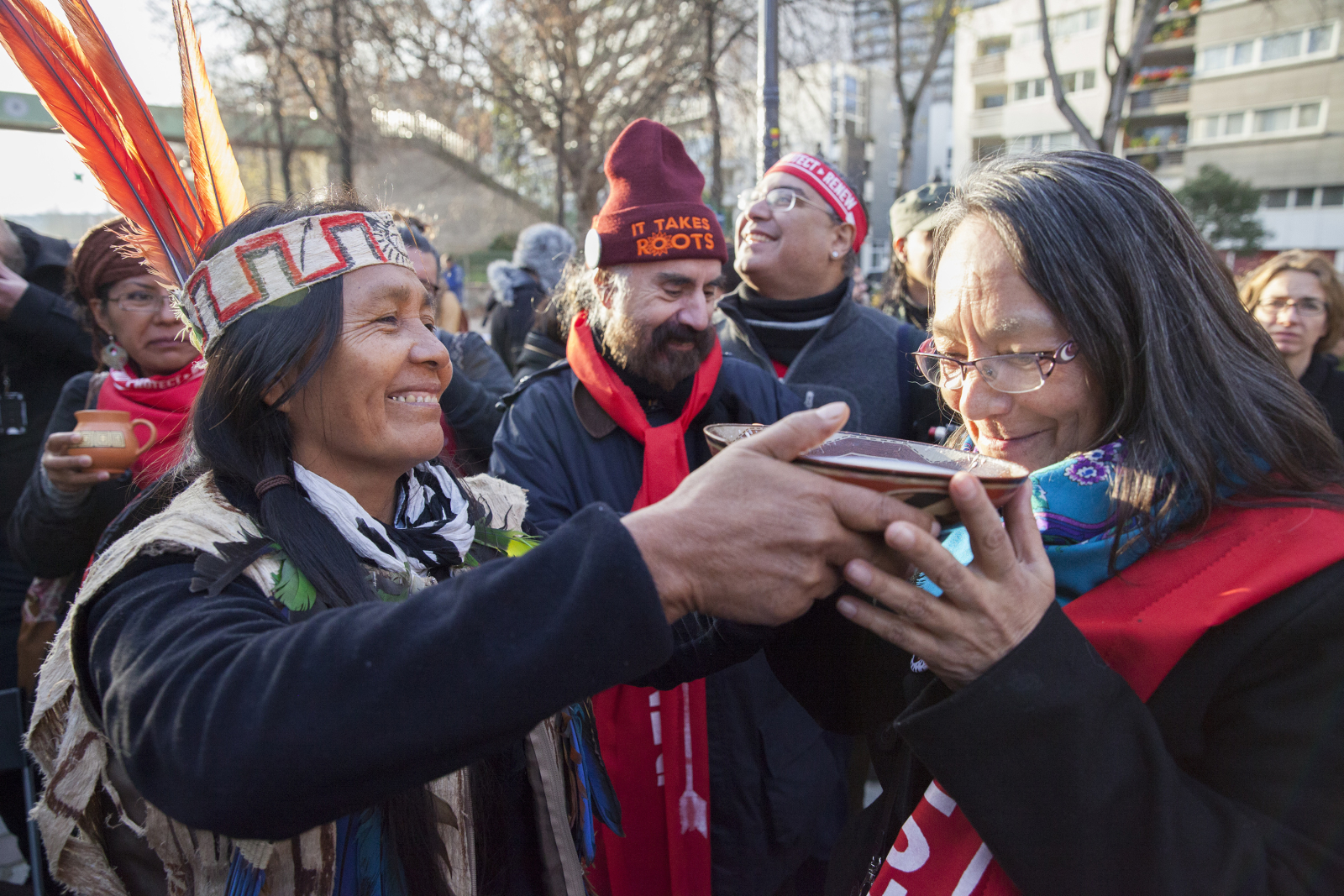 A week later, after daily pressure by CAN-RAC, Minister McKenna surprised a world of nations and negotiators in closed-door climate talks. “I support the goals of 1.5 [degrees],” she announced, according to a Green Party observer. The announcement was later confirmed by the minister’s office.

Reaction to the news was euphoric. National Observer’s own breaking story on this went viral, with 50,000 Facebook shares.

Canadians had, apparently, a good deal of pent-up hope for a Trudeau government to punch far more ambitiously in the climate talks than the previous Conservative government. And CAN-RAC played a part in getting Canada to the 1.5 degree aspiration, said Comeau:

“I think Climate Action Network as a whole played a role with pushing hard as part of that effort.

“I also think, though, that Canada came to this meeting ready to respond to the concerns of the least-developed countries, and agreeing that 1.5 was important in their overall strategy. It also is a nod to the reality of decarbonization. So together we made this happen and it is a good thing.”

That same weekend, news broke that Ottawa was fighting for the inclusion of Indigenous rights in the Paris climate accord, against resistance from U.S. and European Union powers.

So, for a time, both environmental and Indigenous leaders found themselves rushing to issue happy-with-Canada press releases — something that happened rarely, if at all, in the previous decade of international climate negotiations. 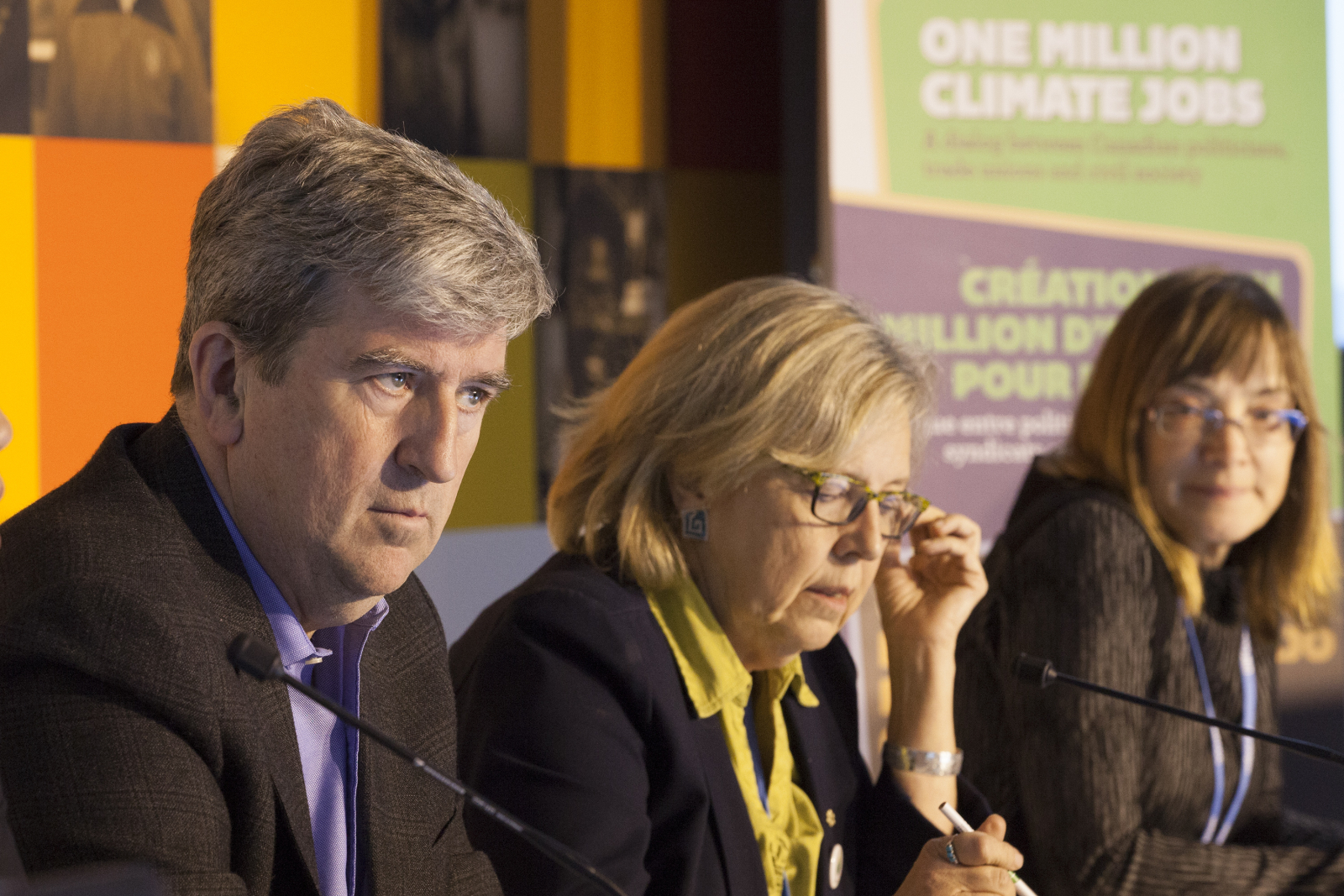 No one knows how a 1.5 degree limit on global warming would break down for Canada. And Canada won’t announce its national target for greenhouse gas reductions until 90 days from now.

But any massive shift of Canada’s economy away from fossil fuels will naturally involve some kind of downturn in the nation’s oil sands industry, which represents 8.5 per cent of all of Canada’s emissions, according to the latest federal inventory.

That’s why CAN-RAC Canada convened a special “One Million Climate Jobs” panel to involve labour and government leaders in those discussions about a real movement to de-carbonize Canada.

“There’s no naivety about the scale of the work ahead of us. None,” Comeau told the audience. Panelists included Ontario’s environment minister, Glen Murray, and Green Party of Canada leader Elizabeth May.

“Our new Prime Minister Justin Trudeau — I think he really gets it,” said May. “But it’s hard to steer that ship. I think there’s lots of people left who won’t want it to move as fast.”

But the star of the show came from the crowd — a burly Fort McMurray oil sands mechanic and father named Ken Smith.

The 55-year-old president of his local union chapter, Unifor 707A, represents 3,500 Alberta oil workers. He gave an impromptu speech to the hushed room. “We hope we’re seeing the end of fossil fuels for the good of everybody. But how are we going to provide for our families?”

The Canadian Labour Congress — the largest labour organization in Canada, representing over three million workers — hopes a transition away from the oil sands will not mean a huge flight of billions in capital, or jobs taken out of the country.

“They will offshore their production to the extent they can get away with it,” said Canadian Labour Congress president Hassan Yussuff. “But make no mistake, we won’t let them leave workers behind. Or else there will be a fight, a fight we do not need, and do not want.”

So began the “getting off fossil fuel” conversations that CAN-RAC was facilitating — discussions that were unthinkable a short time ago, said Comeau.

From the Streets to the Podium at Paris Climate Talks

VIdeo —"From the street to the Podium at COP21" by Zack Embree and Mychaylo Prystupa.

Minister McKenna grinned widely as France’s president of COP21, Laurent Fabius, strode past her to the front of the main plenary to “gavel” the final climate agreement into international law.

After two weeks of haggling, 195 countries agreed to strive to limit global warming to no more than 1.5 degrees Celsius, and to reach zero greenhouse gas emissions by the second half of the century.

Canada played a positive role in the negotiations, says CAN-RAC, though it still shared in two Fossil of the Day awards for not having greater ambition in addressing the concerns of least-developed nations about compensation for loss and damage.

Comeau, who had to go home halfway through the summit due to an eye infection, stayed in virtual touch with the negotiations on an hour-by-hour basis, and said this about the final text:

“Governments will be bound to develop plans and actions based on science to get us there. We already know from scientific analysis that keeping warming to 1.5 C requires we get to net zero CO2 emissions by 2045 to 2050.

“The combination of a stronger temperature limit and the requirement to develop a low-emission plan means Canada now must strengthen its domestic targets for 2020, 2025 and 2030 within 90 days of Paris to put us on a renewable energy pathway for 2050.

“There remains a lot of work to be done and governments will try to weaken implementation of the Paris Agreement. But progress is unstoppable: 100 per cent renewable is now 100 per cent inevitable.”

“Years from now, today may very well be the day our children look back to as the beginning of an ambitious global effort to finally fight climate change. I am proud of the role Canada is playing in reaching this historic and balanced agreement, and I am confident that the world will rise to the challenge of addressing climate change.”

CAN-RAC paid National Observer for this one sponsored-content article and had editorial oversight of it. The monies received helped our publication expand our video coverage of Paris COP21 historic summit. There was no communication with CAN-RAC about any other stories covered daily by our journalists.